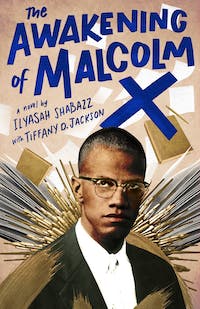 In Charlestown Prison, Malcolm Little struggles with the weight of his past. Plagued by nightmares, Malcolm drifts through days, unsure of his future. Slowly, he befriends other prisoners and writes to his family. He reads all the books in the prison library, joins the debate team and the Nation of Islam. Malcolm grapples with race, politics, religion, and justice in the 1940s. And as his time in jail comes to an end, he begins to awaken—emerging from prison more than just Malcolm Little: Now, he is Malcolm X.
Here is an intimate look at Malcolm X's young adult years. While this book chronologically follows X: A Novel, it can be read as a stand-alone historical novel that invites larger discussions on black power, prison reform, and civil rights.

"Through Malcolm’s memories of parental guidance and his participation in wide-ranging prison conversations, readers join him in weighing viewpoints on topics from Marcus Garvey’s pan-Africanism to the ill-defined purpose of incarceration in America. A compelling account."—Bulletin of the Center for Children's Books

"Readers will make connections to persistent injustices faced by Black communities—and the beautiful ways which, despite that terror, Black families have found to craft visions of freedom and lives of dignity and love. A must-read reminder that transformation is made possible through community."—Kirkus Reviews (starred review)

"An affecting piece of historical fiction . . . a perfect entrée for young adult readers to learn about the formative years of a pivotal leader in the civil rights movement."—Booklist

"Libraries will be incomplete without the inclusion of this captivating historical novel by Malcom X’s daughter."—School Library Journal (starred review)

"Shabazz and Jackson effectively illuminate not only the figure’s religious and political awakening, but the injustice historically leveled against the Black community by mass incarceration and systemic racism."—Publishers Weekly (starred review)

If you stick a knife in my back nine inches and pull it out six inches, there’s no progress. If you pull it all the way out, that’s not progress. The progress is healing the wound that the blow made.

Ilyasah Shabazz, third daughter of Malcolm X and Dr. Betty Shabazz, is an educator, activist, motivational speaker, and author of multiple award-winning publications, including her books, Betty Before X and X: A Novel. She is also an active advocacy worker and an adjunct professor at John Jay College of Criminal Justice in New York City.

Tiffany D. Jackson is the critically acclaimed author of YA novels including the NAACP Image Award-nominated Allegedly and Monday's Not Coming, a Walter Dean Myers Honored Book and Coretta Scott King New Talent Award winner, as well as Let Me Hear a Rhyme (HarperCollins / Katherine Tegen Books). She received her bachelor of arts in film from Howard University, her master of arts in media studies from the New School, and has over a decade in TV/Film experience.