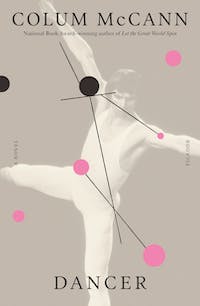 A Russian peasant who became an international legend, a Cold War exile who inspired the adoration of millions, an artist whose name was a byword for genius, sex, and excess. The magnificence of Rudolf Nureyev's life and work is known, but now Colum McCann reinvents this erotically charged figure through the light he shed on the lives of those who knew him.

Spanning four decades and many worlds, from the killing fields of World War II to the wild abandon of New York's gaudy eighties, Dancer is peopled by a large cast of characters, obscure and famous, real and imagined. Shoemakers, nurses, translators, and hustlers take the stage alongside Margot Fonteyn, Erik Bruhn, and Andy Warhol. At the heart of this lavish spectacle stands the artist himself, willful, lustful, ambitious, and driven by a never-to-be-met need for perfection.

Writing in ecstatic prose, as if inhabited by the spirit of his extraordinary subject, Colum McCann evokes the distinct consciousness of the man and the glittering reflection of the myth. The result is a monumental twentieth-century story of love, art, fame, and exile.

"McCann is a consummate stylist who nonetheless imbues his fiction with the cold stamp of reality."—The Boston Globe

"Exuberant and exhilarating . . . A brilliant leap of imagination."—San Francisco Chronicle

"The goal of a book like this is to catch the spirit of the person and his age. It's a tall order, and one that Dancer pulls off brilliantly."—The Seattle Times

"Dancer is the most breathtaking tribute to Nureyev since Jamie Wyeth's famous paintings."—Esquire

"Remarkable: What McCann imagines so beautifully is the way a hero walks through life somewhat differently from the rest of us, the mere breeze of his passing setting off a thousand ripples of change, both good and bad."—Salon

"An impressive evocation of life on three continents in the last half of the twentieth century . . . McCann's talent lies in imagining a life staged so publicly by creating the intimate lives and stories of those only watching from the wings."—The Houston Chronicle

"Breathtaking . . . Every sentence sounds new and beautiful, no matter how often it's read."—USA Today

"McCann writes as if the fate of the world depends on it. Worry not, the world is saved: Dancer is a masterpiece."—Aleksandar Hemon, author of Nowhere Man

"Nureyev took a leap from Soviet Russia to Paris and the postwar New York of Andy Warhol—a vertiginous leap. The reader follows, entering lives lived at the opposite poles of human experience and feeling, as in childhood, the extraordinary and terrible largeness of the world: blood and dancing, massive choirs and solitary monologues. Colum McCann is a precise and uncanny listener. And so an unforgettable storyteller."—John Berger, author of The Shape of a Packet

"Dancer has the wingspan of a great Russian novel, which is only fitting for an imagined life of Rudolf Nureyev. This is the book you'll want to take on a long plane ride; you'll be so seduced you'll sip the wine and eschew the dinner. And you'll admire Colum McCann for taking big chances—war, Russia, ballet, life in three continents, the pursuit of beauty. The writing issues from a knowing and compassionate heart: hard, when necessary, as the frozen ground of wartime Leningrad; supple and liturgical as Nureyev raising Fonteyn to heaven."—Frank McCourt, author of Angela's Ashes

"Rudolf Nureyev was an extremely complex person, yet Colum McCann has admirably captured the essence of this great man."—Maria Tallchief, prima ballerina

"McCann writes as if the fate of the world depends on it. Worry not, the world is saved. Dancer is a masterpiece."—Aleksandar Hemon, author of The Lazarus Project

"I finished Dancer several days ago and am still spinning. This is a beautiful book, layered with all the nuance and sweat and disciple that accompanied Nureyev's genius. In the purity of the storytelling, in its flawless narrative construction, this is prose that is itself a dance."—Jeffrey Lent, author of Lost Nation

"Colum McCann has written a most generous book. Compassionate and at the same time restrained in all the best ways, Dancer is suffused with both energy and grief, liberation and loss."—Anne Michaels, author of Fugitive Pieces

"The melancholy, sparkle, sinew and temperament of Dancer are as great as its hero's. Colum McCann's lyrically powerful prose creates, expands, and reveals life upon life, making truth out of myth and heart out of history."—Amy Bloom, author of A Blind Man Can See How Much I Love You

"A chorus of voices breathe new life into the story of Rudolf Nureyev, one of ballet's greatest performers, in this vibrant, imaginative patchwork of a novel by Irish expatriate McCann (This Side of Brightness, etc.). As a seven-year-old peasant boy in 1944, Rudi dances for wounded soldiers in a hospital ward during World War II. By the mid-1950s he has outgrown life in the tiny Soviet town of Ufa, his unfailing determination to perform (against the stern wishes of his father) driving him into the wider world. It is his stubborn persistence more than his natural talent that distinguishes him, but his first teachers see great potential in him, and he is accepted into a ballet company in Leningrad. He defects to France and later moves on to Italy, where 'the ovations become more exhausting than the dance" and he is sucked into the drug and disco culture of the late '70s, even after his partner Margot Fonteyn urges him to stay focused. A relationship with New York gay hustler Victor Pareci allows Rudi to indulge his wildest impulses, but his brashness and self-absorption are tempered when he journeys back to his homeland in 1987 in the touching conclusion. The sections narrated by different characters, some central and some marginal, create a kaleidoscopic effect. Faithfully capturing the pathos and grim poverty of the Soviet Union at mid-century, McCann also reveals a splashy tabloid affinity for the excesses and effects of fame and notoriety . . . The novel is a lovely showcase for his fluid prose and storytelling skill."—Publishers Weekly

"McCann's latest (after Everything in This Country Must) is hugely ambitious: a fictionalized account of the life of Rudolph Nureyev—the Cold War danseur noble lauded as the world's first 'pop star dancer'—as told by those who knew him. Among the narrators are the irrepressible Yulia, the daughter of Nureyev's first ballet teacher; Margot Fonteyn, Rudik's brilliant dance partner; Victor, a gay hustler from the Lower East Side with a penchant for blow, bath houses, and back talk; and others. What emerges is a pastiche of both the man and the myth, the disparate voices combining to create a lyrical and variegated portrait . . . The work hangs together well and is . . . an enormous achievement. Both the Soviet Union of the war-torn 1940s and the displacement and hopefulness of an exile's life are perfectly evoked, and Nureyev-impossible, erratic, and brilliant—is a golden flame that sets everything ablaze. Recommended."—Tania Barnes, Library Journal

"For three decades, the legend of ballet dancer Rudolph Nureyev spread from continent to continent: the semicultured boy from Ufa who takes the Leningrad dance world by storm; political asylum in Paris; the amazing partnership with Margot Fonteyn; the matinee idol dancer; the hyperactive sex life; the enfant terrible. Actual events and qualities of Nureyev's public persona are tossed together in this novel, and his legend, nearly 10 years after his death, becomes myth. Some of the characters are real (Fonteyn, for instance), while others have sprung from the author's imagination. McCann is such a good writer that, real or not, the characters' powerful voices lead the reader to suspend disbelief on an entirely deeper level. Only dance writers and true Rudi fanatics will be able to distinguish the real from the imaginary, and one even suspects they might have some problems. Still, even those who have never been to a ballet—or seen Nureyev dance—will find this book enjoyable."—Frank Caso, Booklist

"A fictionalized biography of Rudolf Nureyev (1938-93), chronicled in an understated, intimate narrative from the celebrated dancer's childhood to the height (and excesses) of his fame. The town of Ufa, in the former Soviet region of Bashkir, was about as far off the beaten track as you could get—especially under Stalin, when it was a secret industrial city not even allowed to appear on the map. Yet Ufa was to provide the first audience for one of the greatest stars in ballet history, who made his world premiere as a six-year-old dancing in the wards of WWII military hospitals. Talented from the start but no prodigy, Nureyev trained long and hard to become a dancer-first in Ufa (very much against the wishes of his father, a Party member who dreamed of having an engineer for a son), and later in Leningrad, where he became a member of the famed Kirov Ballet. When success arrived, it arrived quickly, and by the late 1950s Nureyev was doing command performances for Krushchev and the Central Committee. In 1961 he defected to the West, in Paris, transforming himself into cause célèbre—vilified at home (his father publicly denounced him) and idolized abroad. McCann (Everything in This Country Must, 2000, etc.) tells the story from different perspectives, in chapters narrated alternately by Anna Vasileva (Nureyev's first ballet teacher), Victor Parecci (the gay Venezualian prostitute who became his lover in New York), Yulia Sergeevna (his landlady in Leningrad), and Nureyev himself. Like many success stories, Nureyev's presented a depressing spectacle of vanity and decadence toward the end, and the later chapters (largely chronicles of parties, shopping sprees, hangovers, and petty spites) convey this vividly. The ending, a description of Nureyev's 1987 return to visit his family in Ufa, is appropriate and moving."—Kirkus Reviews

Four winters. They built roads through drifts with horses, pitching them forward into the snow until the horses died, and then they ate the horsemeat with great sadness. The medics...

Colum McCann is the author of books including This Side of Brightness, Zoli, Songdogs and Let the Great World Spin. He has received the International IMPAC Dublin Literary Award, a Pushcart Prize, and was named the first winner of the Grace Kelly Memorial Foundation Award and the Princess Grace Memorial Literary Award. He lives in New York City.