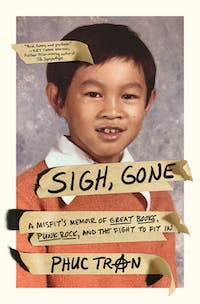 Winner of the New England Book Award for Nonfiction

In 1975, during the fall of Saigon, Phuc Tran immigrates to America along with his family. By sheer chance they land in Carlisle, Pennsylvania, a small town where the Trans struggle to assimilate into their new life. In this coming-of-age memoir told through the themes of great books such as The Metamorphosis, The Scarlet Letter, The Iliad, and more, Tran navigates the push and pull of finding and accepting himself despite the challenges of immigration, feelings of isolation, and teenage rebellion, all while attempting to meet the rigid expectations set by his immigrant parents.

Appealing to fans of coming-of-age memoirs such as Fresh Off the Boat, Running with Scissors, or tales of assimilation like Viet Thanh Nguyen's The Displaced and The Refugees, Sigh, Gone explores one man’s bewildering experiences of abuse, racism, and tragedy and reveals redemption and connection in books and punk rock. Against the hairspray-and-synthesizer backdrop of the ‘80s, he finds solace and kinship in the wisdom of classic literature, and in the subculture of punk rock, he finds affirmation and echoes of his disaffection. In his journey for self-discovery Tran ultimately finds refuge and inspiration in the art that shapes—and ultimately saves—him.

"[Sigh, Gone] recounts in stunning detail [Tran's] coming of age in white, small-town America . . . [and] in laying out his childhood around themes and metaphors, Tran makes his own Great American Memoir."—The Seattle Times

"As the title implies, Sigh, Gone, with its wistful pun on the erstwhile capital city of his native country, is built around Tran’s devotion to and curiosity about language—the friction between English and Vietnamese, the Western literary canon he fell in love with, the said and the unsaid both within his family and in the wider world. The book powerfully explores themes of assimilation, racism, complex and abusive family dynamics, and the challenge of coming into one’s own. In other words, Sigh, Gone is like all great works of literature—it asks big questions, universal in their specificity."—Los Angeles Review of Books

"In actuality and on the pages of this memoir, Tran's life goes off-road, defies reading plans or most other kinds of plans. Which makes Sigh, Gone a congenial read for our chaotic time."—Maureen Corrigan, NPR Fresh Air

"Sigh, Gone provides a vivid and eye-opening look at yet another legacy of the American War in Vietnam: what life was like for Vietnamese children and their families who escaped from their homeland and were transplanted in small-town U.S.A."—The Veteran

"Sigh, Gone is more likely to launch a broken down kid on a mission to read 150 great books—for free, at the local library. Put Phuc Tran's book in the hands of a bunch of teenage punks goofing off in English class and see what they do with it."—PopMatters

"A powerful memoir that proves the transformative power of music and literature . . . Tender and even comic, it is, in his own words, ‘a misfit’s memoir,’ exchanging estrangement and adversity for hard-won accomplishment."—The Center for Fiction

"The best, the funniest and the most heartfelt memoir of the year . . . Sigh, Gone filters the archetypal high school misfit story through the lens of immigration and assimilation, building it into a larger narrative about the ways music and books can bring us together, even when the larger world threatens to tear us apart."—BookPage (starred review)

"[A] funny heartbreaker . . . this wry and unsparing coming-of-age memoir recaps the tumultuous childhood and turbulent adolescence of a bookish Vietnamese immigrant raised in a blue-collar American town."—Shelf Awareness

“The United States was already a better country because Phuc Tran refused to change his name. Then he went even further in changing this country by giving us this bold, funny, and profane memoir: a portrait of a young punk refugee and of heartland America itself, each of them as defiant and compelling as the other.”—Viet Thanh Nguyen, author of Pulitzer-Prize winning The Sympathizer and The Refugees

"I started reading this book and couldn’t stop. Phuc Tran has written the Great American Nerd-Punk Boyhood Memoir, a story that’s rollicking and laugh-out-loud funny while also offering a piercingly profound look at race, the challenges of assimilation, and the inherently defiant act of growing up. Earnest, observant, and diamond-sharp, this is a new voice of unmistakable talent. I’ll follow this writer anywhere."—Sara Corbett, coauthor of New York Times bestselling A House in the Sky

"I like to think that had I been born a much cooler, male, Vietnamese version of myself, Sigh, Gone is the book I would have written. This glorious memoir is a reminder of the transformative power of literature and a tribute to friendships, music, and the unique kindness of Americans. I loved it!"—Firoozeh Dumas, New York Times bestselling author of Funny in Farsi and Laughing Without An Accent

"In Sigh, Gone, Phuc Tran offers a searing, trenchant, and hilarious chronicle of adolescence. His memoir seethes with all the shame and rage, loneliness and longing borne from cultural dislocation; thrums with all the fears and half-truths, anti-triumphs, and confused desires of that vicious and necessary American journey we call 'assimilation'. With this book, Tran not only puts himself on the literary map: he rips the map to pieces and tapes it back together as he—forever the bookish young punk—sees fit. The result: a refugee story of the most modern kind, told entirely on the author's own terms."—Jaed Coffin, author of Roughhouse Friday

"I want to gift this book to my witty friends, my well-read friends, my punk friends, and my Asian American friends. I also want to gift it to my witty, well-read, punk, Asian-American friend who will be so thrilled to know that a book has finally been written to show the world that, yes, we can be all these things. All at once, in all its mash-up glory. Sigh, Gone is a painfully—and I mean painfully—funny book that seems to have collected all our best and worst memories, and turned them into a story told by a smart narrator who will not let us go. His voice will grab you by the hand, but also by your you-know-what, and remind you that for many of us, childhood was really no laughing matter."—Cinelle Barnes, author of Monsoon Mansion

"Sigh, Gone is a memoir reminiscent of Peter Orner and Michael Patrick MacDonald, a journey of self-discovery, humanizing experiences, and connections made through the punk rock counter culture and the thrills of being a life long reader. This is a powerfully entertaining and inspirational delight."—Tim Huggins, bookseller at Brookline Booksmith

"Affecting, deeply-felt . . . a compelling story of an outsider discovering himself and a world where he fit in."—Booklist (starred review)

"Tran also makes his narrating debut—prefaced by an actual drumroll, yes!—with energy, empathy, and plenty of curse words, as he shares his no-holds-barred coming-of-age journey in small-town Carlisle, Pennsylvania."—Booklist (starred review for audiobook)

"Filled with euphoric flights of discovery, this complex and rewarding story of a book-enriched life vividly illustrates how literature can serve as a window to a new life."—Publishers Weekly

PHUC TRAN has been a high school Latin teacher for more than twenty years while also simultaneously establishing himself as a highly sought-after tattooer in the Northeast. Tran graduated from Bard College in 1995 with a BA in Classics and received the Callanan Classics Prize. He taught Latin, Greek, and Sanskrit in New York at the Collegiate School and was an instructor at Brooklyn College’s Summer Latin Institute. Most recently, he taught Latin, Greek, and German at the Waynflete School in Portland, Maine. His 2012 TEDx talk “Grammar, Identity, and the Dark Side of the Subjunctive” was featured on NPR’s Ted Radio Hour. He has also been an occasional guest on Maine Public Radio, discussing grammar; the Classics; and Strunk and White’s legacy. He currently tattoos at and owns Tsunami Tattoo in Portland, Maine, where he lives with his family.