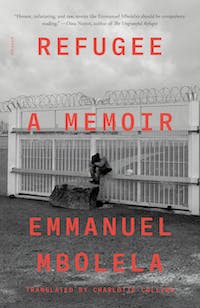 Persecuted for his political activism, Emmanuel Mbolela left the Democratic Republic of the Congo in 2002. His search for a new home would take six years.

In that time, Mbolela endured corrupt customs officials, duplicitous smugglers, Saharan ambushes, and untenable living conditions. Yet his account relates not only the storms of his long journey but also the periods of calm. Faced with privation, he finds comfort in a migrants’ hideout overseen by community leaders at once paternal and mercenary. When he finally reaches Morocco, he finds himself stranded for almost four years. And yet he perseveres in his search for the offices of the United Nations High Commissioner for Refugees—which always seem to have closed indefinitely just before Mbolela’s arrival in a given city—because it is there that a migrant might receive an asylum seeker’s official certificates.

It is an experience both private and collective. As Mbolela testifies, the horrors of migration fall hardest upon female migrants, but those same women also embody the fiercest resistance to the regime of violence that would deny them their humanity. While still countryless, Mbolela becomes an advocate for those around him, founding and heading up the Association of Congolese Refugees and Asylum Seekers in Morocco to fight for migrant rights. Since obtaining political asylum in the Netherlands in 2008, he has remained a committed activist. In Refugee, Mbolela provides a direct, uncompromising, clear-eyed—and overlooked—perspective on a global crisis.

“We seldom read their complete stories in their own words, except in brief answers to journalists’ questions on rescue ships or in refugee camps. Thus the value of Congolese activist Emmanuel Mbolela’s comprehensive 2014 account, Refugee . . . The pain, passion, and frustration of Mbolela’s journey, and the plight of the millions like him, are manifest.”—David Mehegan, Arts Fuse

“Only Emmanuel Mbolela could have written this spectacular debut memoir, which conveys everything the world needs to know about the migration crises in Africa and Europe. Refugee tackles the urgent issues of immigration, human rights, and today's fractured border system, which has become the site of inhumane treatment and horrific crimes against migrants who are fearlessly seeking better lives for themselves and their families. It’s a must-read for anyone interested in their stories.”—Abdi nor Iftin, author of Call Me American

“Honest, infuriating, and raw, stories like Emmanuel Mbolela’s should be compulsory reading. Here is the making of an activist, and a powerful chronicle of the tragedies and systematic deprivations that have become sadly routine for refugees. Recounted so plainly, with so little adornment or self pity, you’ll shiver in his place.”—Dina Nayeri, author of The Ungrateful Refugee

“What makes Emmanuel Mbolela’s book so impressive is that it is not only a courageous and detailed denunciation, it is also a book of ineradicable inextinguishable hope. A book of resistance, of the rebellion of conscience. It is an important weapon in the fight against this racism, which is exhibited by so many Europeans and their state authorities, and exerts criminal, sometimes deadly influence on their policy of rejecting refugees. Mbolela deserves our admiration, and our unqualified, patient, absolute solidarity.”—Jean Ziegler, Advisory Committee to the UN Human Rights Council

"[Refugee] connects the dots between neocolonial capitalism, African kleptocracy and wars, and the inhumane treatment of refugees at nearly every step of their arduous journeys . . . Mbolela’s matter-of-fact testimony follows the tradition of Rigoberta Menchú, and, rather than offering artistically rendered scenes to tug heartstrings, he depicts the full brunt of the repetitiveness of atrocity . . . His humility fuels this powerful account, and anyone concerned with the plight of refugees owes it to themselves to pick this up."—Publishers Weekly

THE DEMOCRATIC REPUBLIC OF THE CONGO


The so-called “Democratic” Republic of the Congo—“La République Démocratique du Congo,” or the DRC for short—is my homeland. In 2002 I was forced to leave my country...

Emmanuel Mbolela; Translated by Charlotte Collins from the German translation by Alexander Behr

Emmanuel Mbolela is an author, an activist, and a refugee. He was born in the Democratic Republic of the Congo and studied economics in Mbuji-Mayi. In 2002, he was arrested because of his political engagement. After his release, he was forced to emigrate and embarked upon a six-year odyssey through West Africa, the Sahara, and Morocco. In 2008, he was granted asylum in the Netherlands. He originally published Refugee in German in 2014.

Charlotte Collins translates literary fiction and plays from the German. She was awarded the Helen and Kurt Wolff Translator’s Prize in 2017 for A Whole Life, by the Austrian author Robert Seethaler, which was also short-listed for the Man Booker International Prize. Her other translations include Seethaler’s The Tobacconist, Homeland, by Walter Kempowski, The End of Loneliness, by Benedict Wells, and Nino Haratischvili’s The Eighth Life (cotranslated with Ruth Martin).