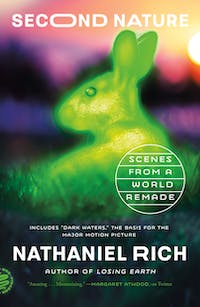 We live in a time when scientists race to reanimate extinct beasts, our most essential ecosystems require monumental engineering projects to survive, chicken breasts grow in test tubes, and multinational corporations conspire to poison the blood of every living creature. No rock, leaf, or cubic foot of air on Earth has escaped humanity’s clumsy signature. The old distinctions—between natural and artificial, dystopia and utopia, science fiction and science fact—have blurred, losing all meaning. We inhabit an uncanny landscape of our own creation. In Second Nature, ordinary people make desperate efforts to preserve their humanity in a world that seems increasingly alien. Their stories—obsessive, intimate, and deeply reported—point the way to a new kind of environmental literature, in which dramatic narrative helps us to understand our place in a reality that resembles nothing human beings have known.

From Odds Against Tomorrow to Losing Earth to the film Dark Waters (adapted from the first chapter of this book), Nathaniel Rich’s stories have come to define the way we think of contemporary ecological narrative. Through the essays in Second Nature, he asks what it means to live in an era of terrible responsibility. The question is no longer How do we return to the world that we’ve lost? It is What world do we want to create in its place?

"[Second Nature is] an unwavering look at our increasingly dystopian world . . . Rich presents humanity's war against nature in vivid detail . . . Flowing and deeply researched prose paints scene after scene of the ubiquitous entropy that is gaining momentum . . . Rich manages to fluently and empathetically depict in a digestible way the predicament in which we now find ourselves."—Dahr Jamail, The New York Times Book Review

“Tales of greed, corruption, and indifference abound in reporting on climate change and ecological disaster, and there are plenty in this vibrant book: DuPont and the poisoning of Parkersburg, West Virginia; SoCalGas and the poisoning of Porter Ranch, California. But there are also stories of bravery, passion, and inventiveness, like the quests to bring the passenger pigeon back from extinction, and to create eggless egg and meatless meat. Rich has an appreciation for dreamers, even for billionaires whose idealism may be indistinguishable from hubris. Will the three-hundred-foot-tall clock Jeff Bezos is building inside an excavated mountain in Texas really make humanity think more about its future?”—The New Yorker

"The essays in Second Nature reveal important truths that gather power when they are read together."—Science

"If Losing Earth was maddening (the only thing worse than staring down the barrel of endless scorching summers, soupy winters, and catastrophic wildfire seasons is knowing politicians could’ve done something about it and didn’t), Second Nature is unsettling."—Grist

"One of the singular pleasures of reading Nathaniel Rich’s Losing Earth is his ability to find and bring to life on the page the women and men engaged in saving the planet. This skill is not surprising, given that Rich is also an acclaimed novelist, but it does help explain why he is so good at what he does, as amply demonstrated in his latest book of nonfiction, Second Nature: Scenes from a World Remade."—Air Mail

"Nathaniel Rich’s electric Second Nature . . . is a tour de force examining the influence humans exert on the world . . . The reading experience is by turns demoralizing and galvanizing, like most worthwhile things."—Vanity Fair

"Rich's elegy to a planet he likens to a critical care patient is lyrical, erudite, and devastating . . . [His] investigation of 'crimes against nature' and the people who are trying to stop them is alarming, enlightening, and necessary."—O Magazine

"[A] vividly reported survey . . . Frightening but with an undercurrent of humor, Rich's study is packed with moving insight."—Publishers Weekly


Fort Bragg’s Glass Beach is the most popular attraction on the Northern California coast. It receives more visitors than the Lost Coast, through which steep trails navigate cloud forests, waterfalls,...

Nathaniel Rich is the author of Losing Earth: A Recent History, a finalist for the PEN/E. O. Wilson Literary Science Writing Award, and a winner of awards from the Society of Environmental Journalists and the American Institute of Physics. He is also the author of the novels King Zeno, Odds Against Tomorrow, and The Mayor’s Tongue. He is a writer-at-large at The New York Times Magazine and a regular contributor to The Atlantic, Harper’s Magazine, and The New York Review of Books. Rich lives in New Orleans.

Read Author Interview at The Lens