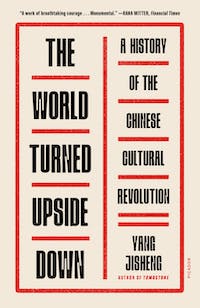 As a major political event and a crucial turning point in the history of the People’s Republic of China, the Great Proletarian Cultural Revolution (1966–1976) marked the zenith as well as the nadir of Mao Zedong’s ultra-leftist politics. Following Tombstone, his groundbreaking and award-winning history of the Great Famine, Yang Jisheng presents the only history of the Cultural Revolution by an independent scholar based in mainland China, and makes a crucial contribution to understanding the lasting influence of those years.

The World Turned Upside Down puts every political incident, major and minor, of those ten years under extraordinary and withering scrutiny, and arrives in English at a moment when contemporary Chinese governance is leaning once more toward a highly centralized power structure and a Mao-style cult of personality.

"Yang's book offers the most comprehensive journalistic account yet of contemporary China's foundational trauma . . . [he] describes, in often overwhelming detail, the intricate internal power struggle that eventually erupted into the Cultural Revolution."—Pankaj Mishra, The New Yorker

"Rather than being chastened, Yang has done it again . . . Yang’s book has no heroes, only swarms of combatants engaged in a 'repetitive process in which the different sides took turns enjoying the upper hand and losing power, being honored and imprisoned, and purging and being purged'—an inevitable cycle, he believes, in a totalitarian system. Yang . . . benefited from the recent work of other undaunted chroniclers, whom he credits for many chilling new details about how the violence in Beijing spread to the countryside."—Barbara Demick, The Atlantic

"Monumental . . . Yang now brings his reputation as one of China's most daring historical writers to another open wound in modern Chinese history, the Cultural Revolution . . . The World Turned Upside Down is a formidable work of research and analysis, and Stacy Mosher and Guo Jian’s lucid translation is a major achievement . . . Read this book to be reminded about one of China's darkest periods, and to mourn that so much of its modern history is still, ironically and tragically, told outside the country's own borders."—Rana Mitter, Financial Times

“A potent and sprawling history of the Cultural Revolution, a little-understood and catastrophic decade in modern Chinese history . . . Essential . . . [The World Turned Upside Down] belongs alongside The Gulag Archipelago as a denunciation of tyranny.”—Kirkus Reviews

“Fanatical ideology, cut-throat intrigue and vast bloodshed roil China in this sweeping history of the Cultural Revolution . . . This exhaustive and sometimes horrifying account demonstrates how deranged governments become when unconstrained by democracy and individual rights.”—Publishers Weekly

A series of major events occurred before the Cultural Revolution, each the consequence of the one that preceded it. With each event, conflict accumulated until it reached...

Yang Jisheng; Translated from the Chinese and edited by Stacy Mosher and Guo Jian

Yang Jisheng was born in 1940, joined the Chinese Communist Party in 1964, and worked for the Xinhua News Agency from January 1968 until his retirement in 2001. For fifteen years, he was a deputy editor at Yanhuang Chunqiu (Chronicles of History), an official journal that regularly skirted censorship with articles on controversial political topics. In 2015, he resigned under official pressure. For his groundbreaking work Tombstone, Yang won Sweden’s Stieg Larsson Prize for journalistic courage in 2015, and the Louis M. Lyons Award for Conscience and Integrity in Journalism, presented by the Nieman Fellows at Harvard University, in 2016. Tombstone also won the Manhattan Institute’s 2013 Hayek Book Prize and the 2013 Lemkin Book Award from the Institute for the Study of Genocide. Yang Jisheng lives in Beijing with his wife and two children.

Stacy Mosher learned Chinese in Hong Kong, where she lived for more than seventeen years. A longtime journalist, Mosher currently works as a translator and editor in Brooklyn, New York.

Guo Jian is a professor of English at the University of Wisconsin–Whitewater. Originally trained in the Chinese language and literature, Guo was on the Chinese faculty of Beijing Normal University until he came to the United States to study for his Ph.D. in English in the mid-1980s.