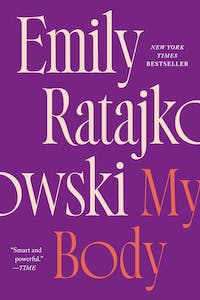 Emily Ratajkowski is an acclaimed model and actress, an engaged political progressive, a formidable entrepreneur, a global social media phenomenon, and now, a writer. Rocketing to world fame at age twenty-one, Ratajkowski sparked both praise and furor with the provocative display of her body as an unapologetic statement of feminist empowerment. The subsequent evolution in her thinking about our culture’s commodification of women is the subject of this book.

My Body is a profoundly personal exploration of feminism, sexuality, and power, of men's treatment of women and women's rationalizations for accepting that treatment. These essays chronicle moments from Ratajkowski’s life while investigating the culture’s fetishization of girls and female beauty, its obsession with and contempt for women’s sexuality, the perverse dynamics of the fashion and film industries, and the gray area between consent and abuse.

Nuanced, fierce, and incisive, My Body marks the debut of a writer brimming with courage and intelligence.

"My Body offers a lucid examination of the mirrors in which its author has seen herself, and her indoctrination into the cult of beauty as defined by powerful men. In its more transcendent passages . . . the author steps beyond the reach of any 'Pygmalion' and becomes a more dangerous kind of beautiful. She becomes a kind of god in her own right: an artist."—Melissa Febos, The New York Times Book Review

"[My Body] challenges an either-or fallacy of womanhood: that Ratajkowski can’t have both a body and a brain, can’t be both appealing and incisive, can’t have both a brand and a book . . . Most of the essays oscillate between pride and disenchantment with Ratajkowski's own beauty, especially as a means of making money and attaining a restricted kind of social capital. My Body’s smartest and most moving moments sit with these warring feelings, allowing several to coexist . . . A formidable project."—The Washington Post

"A provocative curve ball, with absorbing essays on beauty and consent."—Chicago Tribune

"A fascinating work: insightful, maddening, frank . . . So astute on the subject of how her body is interpreted . . . Ratajkowski is a graceful and thoughtful writer."—The Atlantic

"Raises thought-provoking questions . . . By unpacking the paradoxes of capitalising on the male gaze in the Instagram era, Ratajkowski offers a fresh perspective on an age-old problem."—Financial Times

"In My Body, Emily Ratajkowski reflects on her fraught relationship with the huge number of photographs of her body that have come to define her life and career . . . If Ratajkowski is complicit in being looked at, the crime is ours for looking."—Andrea Long Chu, The New York Times Magazine

"My Body chart[s] a sinuous path through coming-of-age stories and meditations on capitalism and power, female friendship, and finally motherhood. Ratajkowski writes with an incisive vulnerability that can give way to images of striking beauty."—Larissa Pham, The Nation

"No stranger to discourse and scrutiny over women’s bodies, Emily Ratajkowski brings nuanced insight to questions about empowerment versus commodification of women’s bodies and sexuality. Blending cultural criticism and personal stories, My Body is smart and powerful."—Time

"Soul-searching, revealing, and personal . . . A fascinating memoir of objectification and misogyny [and] a searing work of cultural criticism about sexuality, power, fame, and consumption, My Body is the brilliant debut of a fearless multihyphenate from whom we're eager to hear more."—Esquire

"Emily Ratajkowski’s My Body has the urgency of a note slipped through the bars of a gilded cage . . . The book is a reckoning with a success that has brought its author pain as much as pleasure. It is a critique of the ways we commodify the female body, written by a woman whose body is among the most lucratively commodified in the world . . . It is pointed, occasionally caustic, and frequently troubling."—Esquire UK

"Exacting . . . prescient . . . It’s good business for models to be aware of how they appear, but few have interrogated the political implications of their body for them and for those who consume it in the form of a book . . . [My Body] is a descent into complication."—Vanity Fair

"My Body is a memoir, but it’s also a slow, complicated indictment of a profession and the people who propel it. Ratajkowski doesn’t so much direct blame at any one person or organization as paint a personal picture of what it was like for her to be young, naive, ambitious, and smart—and to feel reduced, far too often, to a collection of body parts . . . [My Body] will deliver a more nuanced and introspective rendering of her interior than those who come to it with surface interests might expect."—Vogue

"A smart and glittering collection of essays . . . It’s thrilling to sit with Ratajkowski in the roiling surf of her life, in elegant stories written with uncomfortable honesty. It’s revelatory, too, to explore digital life and body politics through the eyes of a person whose body shapes a discourse, and unexpectedly moving to see the bruises left behind . . . To hold her stories up to the light, shards of glass, and see which ones draw blood."—The Guardian

"Thoughtful and accessible . . . The anecdotes in My Body dramatise what is always true, if often implicit: that women can neither fully escape nor fully inhabit bodies that men are bent on appropriating."—Becca Rothfeld, The Guardian

"Thought-provoking . . . Ratajkowski doesn’t shy away from situations or thoughts that might paint her in a negative light and it’s this raw honesty that helps to create a self-portrait of Ratajkowski as a whole, flawed person—something that she has perhaps never been fully seen as before . . . In My Body, Ratajkowski seems to have found a power that is finally all her own."—Sydney Morning Herald

"Relentlessly brave . . . so important . . . The conversation [about women and commodification and sexual violence] is so heavily nuanced. And we, as a country, usually shy away from nuance. My Body should be required reading."—Lisa Taddeo, Elle

"Scalpel-scarp . . . Ratajkowski’s raw book of essays will change the way you see the supermodel. And, just maybe, yourself."—Elle

"Make no mistake, My Body is excellent . . . Ratajkowski writes with curiosity, intellect, and an acute awareness, even celebration of, the thorny, messy web of contradictions that make up our relationship with female bodies."—Harper's Bazaar

"A set of complex, ambivalent, sometimes funny, very sharp, and also cold and dark meditations on representation and sex, embodiment, and capitalism . . . A very finely honed and controlled literary object."—Amia Srinivasan, author of The Right to Sex, Interview magazine

"Anyone who says they aren’t at least curious about Emrata’s memoir is lying."—Nylon

"Deeply honest and upsettingly familiar . . . My Body is no 'gotcha' of a memoir—it's a measured, introspective study of a woman who, like many, has been perceived as an object for as long as she can remember . . . It's also a gift to anyone who's spent hours analyzing their reflection in the mirror or allowed their preconceived notions of someone else affect their own self-esteem. Jealous girls, this one's for you."—InStyle

"An unflinching look at the commodification of female sexuality—and one woman's fight back."—People

"Fascinating . . . There are no neat resolutions in My Body, but rather Ratajkowski weighing up where exploiting her image has got her and confessing—with striking vulnerability—the agony and ecstasy of being idolized."—CNN Style

"Ratajkowski’s clean, clear writing . . . wrestles with what it means to be conventionally attractive, both the good and bad . . . There’s hope in the positive thoughts about how strong her body can be, how much it can do, how it’s a beautiful tool. But it’s a tool nonetheless."—Buzzfeed

"Nuanced, perceptive, and brave as hell . . . A worthwhile read that proves the author is here to stay."—Shondaland

"I devoured My Body, a book describing an adolescence so contrary to my own . . . Ratajkowski's honesty is refreshing . . . A wonderful collection of essays, and not just because a model wrote a book."—Sarah Hagi, Gawker

“These powerful essays mark a blazing, unexpected literary debut. Emily Ratajkowski interrogates beauty, sex, power, objectification, fame, and betrayal, by both self and others, with lucidity and scorched-earth honesty. I read these pages, breathless with recognition and the thrill of reading a new voice telling it like it is.”—Dani Shapiro, author of Inheritance: A Memoir of Genealogy, Paternity, and Love

"Forget what you know about Emily Ratajkowski. In My Body, she investigates the double bind of sexuality and power with a skillful eye for nuance and a noteworthy fearlessness. These essays don’t cut corners—we are all implicated in this web of misogyny and objectification, even Ratajkowski herself. For all the ways in which Ratajkowski’s life is extraordinary, or the way in which these stories will shock readers, My Body thrives on moments when her experience as a woman—with its triumphs and missteps—is resoundingly universal."—Stephanie Danler, author of Sweetbitter

"Emily Ratajkowski’s first essay collection needs to be read by everyone. She explores body politics—and the politics of her body—through a uniquely feminist lens in stories that are both page turning and moving as hell."—Amy Schumer, author of The Girl with the Lower Back Tattoo

"Reading My Body is to accompany an extraordinary individual and activist, one who is deeply passionate and thoughtful, as she navigates the joys and pains of life in a digital era. Our experiences may be different, but Emily Ratajkowski’s presentation of diverse perspectives forges a path towards understanding."—Tamika D. Mallory, co-founder, Until Freedom

"In prose that is by turns honey smooth and vicious, uproarious and wounded, Emily Ratajkowski has captured the complicated terrain of having a body people want to sell while having her own agenda she refuses to give up. She knows the pain that lives in every woman and she isn’t afraid to link arms and say she’s been there, and that it hurts. This is the book for all women trying to place their bodies on the map of consumption versus control, and all who want to better understand their impulses. It left me much changed."—Lena Dunham, author of Not That Kind of Girl

"Nuanced . . . engaging . . . a reflective coming-of-age-in-the-industry tale . . . The charm of this book lies in [Ratajkowski's] relatable writing, which shows the complex emotions and confusion of a young woman experiencing her sexual development and maturation into a capable adult . . . a refreshingly candid, fearless look into a model’s body of work and its impact on her identity and politics."—Kirkus Reviews

"An intimate and accomplished essay collection that tackles big questions about internalized misogyny, the male gaze, female empowerment, and the commodification of sexuality . . . Enriched by Ratajkowski’s insider perspective on the modeling industry and her willingness to wrestle with the power of the male gaze rather than outright rejecting it, this is an astute and rewarding mix of the personal and the political."—Publishers Weekly (starred review)

Emily Ratajkowski is a model, actress, activist, entrepreneur, and writer. She has starred in David Fincher’s Gone Girl, among other films. Ratajkowski has also appeared on the covers of multiple magazines and walked the runway for numerous high fashion brands. Her 2020 essay for New York magazine, “Buying Myself Back,” garnered over one million views within twenty-four hours, was hailed as a landmark, and was the magazine’s most-read piece of the year. My Body is her first book.