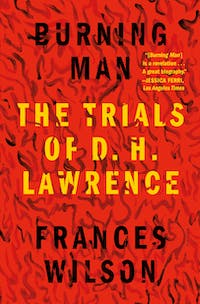 “Never trust the teller,” wrote D. H. Lawrence, “trust the tale.” Everyone who knew him told stories about Lawrence, and Lawrence told stories about everyone he knew. He also told stories about himself, again and again: a pioneer of autofiction, no writer before Lawrence had made so permeable the border between life and literature. In Burning Man: The Trials of D. H. Lawrence, acclaimed biographer Frances Wilson tells a new story about the author, focusing on his decade of superhuman writing and travel between 1915, when The Rainbow was suppressed following an obscenity trial, and 1925, when he was diagnosed with tuberculosis.

Taking after Lawrence’s own literary model, Dante, and adopting the structure of The Divine Comedy, Burning Man is a distinctly Lawrentian book, one that pursues Lawrence around the globe and reflects his life of wild allegory. Eschewing the confines of traditional biography, it offers a triptych of lesser-known episodes drawn from lesser-known sources, including tales of Lawrence as told by his friends in letters, memoirs, and diaries. Focusing on three turning points in Lawrence’s pilgrimage (his crises in Cornwall, Italy, and New Mexico) and three central adversaries—his wife, Frieda; the writer Maurice Magnus; and his patron, Mabel Dodge Luhan—Wilson uncovers a lesser-known Lawrence, both as a writer and as a man.

Strikingly original, superbly researched, and always revelatory, Burning Man is a marvel of iconoclastic biography. With flair and focus, Wilson unleashes a distinct perspective on one of history’s most beloved and infamous writers.

"An ambitious biography . . . Far from being a conventional life and times, Burning Man is a triptych based on a Dante-esque pattern, full of highly imaginative detours into Lawrentian dualism and Lawrentian paradox."—D. J. Taylor, The Wall Street Journal

"A remarkable and idiosyncratic work of biographical criticism . . . Wilson is as good a critic as she is a biographer, and she’s as sharp a stylist as she is a reader . . . Wilson, with her compressed time frame and swift intelligence, has given Lawrence the biography he deserves."—Anthony Domestico, The Boston Globe

"Frances Wilson approaches Lawrence with the fierce spirit of argument that he has always attracted and required . . . This is a bold, fervent contribution to Lawrence studies, full of spirit and insight and enviably agile prose . . . An enthralling and eccentric friend of a book (it’s appropriate that Lawrence’s friendships were as out of control as they were energizing), much more fun as a read than traditional biographies with more measured judgments."—Lara Feigel, The New Republic

"The challenge for any biographer of one Lawrence is to come to terms with his many contradictions—his rage, impotence, silliness and genius. This elegantly written, intelligent and witty account lays them all bare with admirable skill."—Evening Standard

"Not only does Frances Wilson revive her subject, she lifts the whole genre. Biography of this calibre is rare . . . Our most original biographer."—New Statesman

"Wilson’s narrative lays bare the fascinating struggle between Lawrence’s two selves . . . In this astonishing tale, rife with jealousy, messianism and blood, she meets Lawrence on his own terms, offering readers a mythology of his deeply wild and complex spirit."—Francesca Wade, The Guardian

"I cannot remember the last time one left me feeling so exhilarated, so challenged and absorbed . . . Burning Man is a work of art in its own right, as wanton and as magnificently flawed as anything Lawrence ever wrote. If you believe, as I do, that to live life well is to fail in ways that may be unimaginably huge, this strange and confounding book is for you."—Rachel Cooke, The Observer

"[Wilson] gives it to you straight, and leaves you to decide for yourself. This is a red-hot, propulsive book. The impression it leaves is of Lawrence not so much as a phoenix (his chosen personal emblem) rising from the flames, but of a moth coming too close to a candle and, singed and frantic, flying into and into and into the wick."—The Times

"[Wilson's] great strength is the aliveness of her writing, which constantly interweaves glowing phrases from Lawrence into its fabric."—The Sunday Times

"Heady, entrancing, comedic . . . Outstanding . . . Wilson reveals an achingly flawed, ultimately sympathetic human being, who wrote mostly imperfect novels, but whose immense contribution to the twentieth-century literary scene is worth both acknowledging and commemorating. And whatever you have thought of Lawrence, or will think after reading this book, Frances Wilson's Burning Man is a virtuoso performance in the art of biography-writing."—Gerri Kimber, The Times Literary Supplement

"Wilson has made a distinguished career out of testing literary biography’s limits and permissions . . . She does something similar here with Lawrence, fashioning a text that feels as if it had tumbled out in the white heat of conviction . . . Burning Man is an exhilarating ride."—Kathryn Hughes, The New York Review of Books

"Frances Wilson clears away the smoldering ashes and allows Lawrence, like a phoenix, to rise again for our time."—Hannah Joyner, Chicago Review of Books

“Dare we hope that Lawrence might soon assume his rightful place—neither messiah nor pariah—as a writer of boundless freshness, originality and breadth? If so Frances Wilson’s stimulating and utterly enthralling book will be seen to play a vital role in the long-awaited rehabilitation of the man who, in the words of poet Tony Hoagland, ‘burned like an acetylene torch / from one end to the other of his life.’”—Geoff Dyer, author of Out of Sheer Rage

“A brilliantly unconventional biography, passionately researched and written with a wild, playful energy. Above all Frances Wilson’s great achievement is to liberate Lawrence from the old, heavy, moth-eaten ‘priest of love’ mythology, instead breathing new life into his big novels as contemporary ‘autofiction,’ and lovingly stoking the furious fires in his letters, poetry and short stories. A new Lawrence emerges: a thinker, travel writer, and essayist of strange, absurd, irrepressible genius.”—Richard Holmes, author of The Age of Wonder and This Long Pursuit: Reflections of a Romantic Biographer

“‘How can biography do justice to Lawrence’s complexities?’ asks this book. Frances Wilson shows us exactly how. Hers is the most original voice in life-writing today.”—Lucasta Miller, author of L.E.L.: The Lost Life and Mysterious Death of the “Female Byron”

“D. H. Lawrence ‘was a different man in every place,’ Frances Wilson says, and ‘never in the same place for more than a few months.’ This was true whether the places were literal or figurative or (more often) both, and this wonderful book traces in detail Lawrence’s sojourns in three worlds, Hell, Purgatory, and Paradise, which some people call England, Italy, and America. It is easy to lose Lawrence among his contradictions, and he himself often got lost there, but Frances Wilson doesn’t let him out of her subtle sight for a moment.”—Michael Wood, professor of English emeritus at Princeton University and author of The Habits of Distraction


Dante belonged to the close of the great medieval period, called the Age of Faith. His chief work, the ‘Divine Comedy’, tells of his visionary visit to Hell, where the violent, passionate men of the old world of...

Frances Wilson is a critic, a journalist, and the author of several works of nonfiction, including Literary Seductions; The Courtesan’s Revenge; The Ballad of Dorothy Wordsworth, which won the Rose Mary Crawshay Prize; How to Survive the Titanic, winner of the Elizabeth Longford Prize for Historical Biography; and Guilty Thing: A Life of Thomas De Quincey, which was a finalist for the National Book Critics Circle Award and the Los Angeles Times Book Prize. She is a Fellow of the Royal Society of Literature, and she received a fellowship from the New York Public Library's Cullman Center in 2018. She lives in London with her daughter.