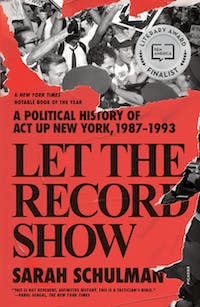 In just six years, ACT UP, New York, a broad and unlikely coalition of activists from all races, genders, sexualities, and backgrounds, changed the world. Armed with rancor, desperation, intelligence, and creativity, it took on the AIDS crisis with an indefatigable, ingenious, and multifaceted attack on the corporations, institutions, governments, and individuals who stood in the way of AIDS treatment for all. They stormed the F.D.A. and N.I.H. in Washington, D.C., and started needle exchange programs in New York; they took over Grand Central Terminal and fought to change the legal definition of AIDS to include women; they transformed the American insurance industry, weaponized art and advertising to push their agenda, and battled—and beat—The New York Times, the Catholic Church, and the pharmaceutical industry. Their activism, in its complex and intersectional power, transformed the lives of people with AIDS and the bigoted society that had abandoned them.

Based on more than two hundred interviews with ACT UP members and rich with lessons for today’s activists, Let the Record Show is a revelatory exploration—and long-overdue reassessment—of the coalition’s inner workings, conflicts, achievements, and ultimate fracture. Schulman, one of the most revered queer writers and thinkers of her generation, explores the how and the why, examining, with her characteristic rigor and bite, how a group of desperate outcasts changed America forever, and in the process created a livable future for generations of people across the world.

"I understand but can’t quite accept that this book is about 700 pages long—not when I tore through it in a day; still now, while fact-checking this review, I can scarcely skim it without being swallowed back into the testimonies . . . Let the Record Show doesn’t seek to memorialize history but to ransack it, to seize what we might need . . . This is not reverent, definitive history. This is a tactician’s bible."—Parul Sehgal, The New York Times

"Sarah Schulman’s remarkable book Let the Record Show offers a thorough and corrective retelling of the history of ACT-UP, introducing a diverse cast of characters that has been largely erased from what passes as the official HIV/AIDS narrative. She brings extraordinary reporting, finely calibrated detail and her own lived experience to a book that is at once a love letter to the movement that refused to back down as it forced an epidemic to its knees and a road map for a new generation of activists grappling with social change."—Linda Villarosa, contributing writer, The New York Times Magazine

"Monumental . . . Schulman doesn’t replace one set of heroes with another; rather, she destroys the idea of singular heroes at all. This is a political choice that creates a more honest representation of ACT UP . . . this is no retreading of familiar ground. Instead, it feels like the capstone of a career . . . The most salient thread we can draw from Let the Record Show is an understanding of how mass movements can succeed and fail, all at the same time, depending on which part of the 'mass' you’re in."—Hugh Ryan, Boston Review

"From the human perspective, it’s simply satisfying to consume Schulman’s fulsome demonstration that ACT UP was not the work of heroic straights or the clean-cut and mostly white men whose names are now synonymous with the group, such as Larry Kramer, but in fact always relied on the many people of color, incarcerated people, women, and drug users who devoted their labor . . . this work of adapted oral history is a mixture of creative froth and leaden grief . . . Gradually, Schulman corrects a view on history that’s been distorted by the profit motive."—Jo Livingstone, The New Republic

"An in-depth and fully realized account . . . a text that offers younger queer activists a rare study of their own history."—Emma Specter, Vogue

"Remarkable . . . One is left with an overwhelming sense of gratitude—not only for the incredible amount of labor that it took to remember, collect, preserve, narrate, and interpret the events of this book, but for the world-changing activism from which we have all benefitted in such incalculable ways."—Nino Testa, Women's Review of Books

"A stunning achievement . . . The expanse and generosity given in Let the Record Show—the integrity of giving people a platform to tell their own story and to showing the messiness and complexity of the truth—reflects the commitment not only of Schulman but of the hundreds of people in the ACT UP movement."—Marcie Bianco, The Advocate

Schulman deliberately avoids nostalgia in favor of emphasizing the work and the mechanisms by which it got done, which were almost always messy and fractured. The book comes in at more than 700 pages, a veritable tome, but every page is not only riveting but necessary . . . At once a choral work and a practical guide, as well as a clear-eyed political history and indictment of who failed the AIDS crisis and why. It is a must-read."—Sarah Neilson, Shondaland

"A deeply generous platform for nearly every ACT UP member’s personal story, motives, and recollections to be told in one place, adding up to an enthralling mosaic of biography, collaboration, and, often, conflict."—Tim Murphy, TheBody

"A masterful work twenty years in the making . . . Schulman holds a unique position to chronicle this critical history and connect it with our own chaotic moment."—Lauren LeBlanc, Observer

"A monumental achievement, the culmination of decades of work, and almost unbelievable in its scope and scale. Its construction is also a lesson in community storytelling; from long profiles of former members and extended transcripts of their interviews, to detailed insights into the day-to-day workings of the group, Let the Record Show honors the humanity of those involved to an extent that no other history of AIDS has achieved."—Corinne Segal, Lit Hub

"Sarah Schulman has written more than an authoritative history of ACT UP NY here—it is a masterpiece of historical research and intellectual analysis that creates many windows into both a vanished world and the one that emerged from it, the one we live in now. I can't think of a book like this—it is an almost entirely new model, uniquely possible as the result of Schulman's life's work. As one of our only genuinely intellectual iconoclasts, she returns to us with this story of a movement that changed the world at least once, now a part of the work to change that world again. Any reader will be changed, I think, by the stories here—radicalized and renewed, which to me is something better than just hope."—Alexander Chee, author of How to Write an Autobiographical Novel

"Characteristically forthright, Sarah Schulman gives us the most comprehensive history of the ACT UP movement in New York to date through a wide range of interviews, a trenchant commentary, and a sustained testament to collaborative action and its history. From this extraordinary history told with the multiple voices of participants, Schulman makes clear that the history of HIV and AIDS in this country has been marred by popular narratives and bouts of grandstanding that largely failed to acknowledge the thousands of lives still lost annually from AIDS, the schisms that opened up serious issues of power within the movement, and the specific ways that people of color and poor people remained unserved by the scientific advances widely celebrated. This book lets us know that neither our sorrow nor our rage is finished, and that the work of acknowledgement of all who struggled and suffered remains our task."—Judith Butler

"In the style of the late great Howard Zinn, Sarah Schulmam has written an epic, moving and important People's History of the ACT UP Movement, filled with powerful storytelling and invaluable lessons in the do's and don’t of organizing. We owe a great deal to Schulman for the depth and years of her research, for her commitment to telling a story that lifts and honors a group rather than highlighting only a few individuals, and for her willingness to tell the whole truth with serious rigor and love."—V (formerly Eve Ensler), author of The Vagina Monologues

"With heart, anger and rigor, Sarah Schulman shows us how AIDS has shaped our political world by letting the people of ACT UP tell us what they did in their own words. Let The Record Show is more than a single book; it’s an encyclopedia, an oral history, and a map. Indeed, as the most marginalized people are again at risk during yet another viral pandemic, Schulman (and the voices she foregrounds so lovingly) gives us an activist guide for communally creating a better world. It is a masterpiece—the book on AIDS history I wish had been available for me to read years ago."—Steven Thrasher, Daniel H. Renberg Chair of Social Justice in Reporting, Northwestern University Medill School of Journalism and author of The Viral Underclass

"Sarah Schulman has achieved the near impossible in this riveting and powerful book. She writes with the knowledge and experience of a passionate insider as she lays out a detailed and deep history of ACT UP. Yet she has a sharp eye for the bigger picture, offering a broad analysis, bringing in diverse, fascinating, and illuminating perspectives. Not until this book has an author captured how ACT UP was grounded in both the feminist and civil rights movements, nor how the group spawned new movements and inspired a new generation of queer activism while dramatically influencing the course of the AIDS epidemic and making a mark on American culture. The writing is crisp and compassionate. The stories are vivid—heroic, painful, breathtaking and joyous. Sarah Schulman has produced a definitive and monumental work."—Michelangelo Signorile, author of It's Not Over: Getting Beyond Tolerance, Defeating Homophobia and Winning True Equality

"A significant boots-on-the-ground account . . . Readers are right there with activists, hearing their stories from them but also others who knew them . . . Vital, democratic truth-telling."—Kirkus Reviews (starred review)

"These portraits, together with the historical context offered throughout, prove the lasting influence of ACT UP and have a lot to teach readers about activism today . . . This engaging, accessible book will find a wide audience among readers interested in activism from the ground up. It will also be a foundational document for historians for generations to come. A must-read."—Library Journal (starred review)

"Schulman presents ACT UP not as a heroic, sanitized institution made up of exclusively white gay men, but as what it actually was: an organization that managed to improve the lives of people living with HIV and AIDS despite its own racism and sexism. By doing this, Schulman creates a much more nuanced—and accurate—portrait of the AIDS crisis, highlighting the ways the disease impacted women and people of color."—Booklist

"[A] fine-grained history . . . [Schulman's] firsthand perspective and copious details provide a valuable testament to the courage and dedication of many unheralded activists."—Publishers Weekly

Part I includes an introduction that summarizes ACT UP’s primary tactics and sources so that contemporary activists can have a stand-alone...

Sarah Schulman is the author of more than twenty works of fiction (including The Cosmopolitans, Rat Bohemia, and Maggie Terry), nonfiction (including Stagestruck, Conflict is Not Abuse, and The Gentrification of the Mind), and theater (Carson McCullers, Manic Flight Reaction, and more), and the producer and screenwriter of several feature films (The Owls, Mommy Is Coming, and United in Anger, among others). Her writing has appeared in The New Yorker, The New York Times, Slate, and many other outlets. She is a Distinguished Professor of Humanities at College of Staten Island, a Fellow at the New York Institute of Humanities, the recipient of multiple fellowships from the MacDowell Colony, Yaddo, and the New York Foundation for the Arts, and was presented in 2018 with Publishing Triangle's Bill Whitehead Award. She is also the cofounder of the MIX New York LGBT Experimental Film and Video Festival, and the co-director of the groundbreaking ACT UP Oral History Project. A lifelong New Yorker, she is a longtime activist for queer rights and female empowerment, and serves on the advisory board of Jewish Voice for Peace.

Article about the Author at The Cut