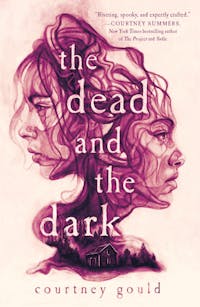 The Dark has been waiting—and it won't stay hidden any longer.

Something is wrong in Snakebite, Oregon. Teenagers are disappearing, some turning up dead, the weather isn’t normal, and all fingers point to TV’s most popular ghost hunters who have just come to town.

Logan Ortiz-Woodley, daughter of TV's ParaSpectors, has never been to Snakebite before. But the moment she and her dads arrive, she starts to get the feeling that there's more than ghosts plaguing this small town. Ashley Barton’s boyfriend was the first teen to go missing, and she’s felt his ghost following her ever since. Although everyone shuns the Ortiz-Woodleys, the mysterious Logan may be the only person who can help Ashley get some answers.

When Ashley and Logan team up to figure out who—or what—is haunting Snakebite, their investigation reveals truths about the town, their families, and themselves that neither of them are ready for. As the danger intensifies, they realize that their growing feelings for each other could be a light in the darkness.

"Imagine Riverdale crossing streams with Stephen King's The Outsider and you'll get a sense of this gripping supernatural mystery . . . Gould's debut begins as a snappy paranormal yarn and unspools into a profound story about the complex interplay between grief, guilt, and identity."—Oprah Daily

"Spooky atmosphere seeps out of every pore of this slow burn ghost story."—Buzzfeed

"A thoroughly creepy ride from start to finish . . . Gould has a gift for supernatural storytelling. The story is fast-paced and quick-moving—it’s easy to find yourself lost in its pages and finish the book in just a day or so."—Culturess

"It's perfectly written to give us a slow burn while simultaneously teasing a new aspect of the mystery in every single chapter . . . But this book was so much more than the mystery—it’s also about that feeling of darkness and depression that lives in all of us; it’s about standing up to hate and realizing we’re not as different from each other as we might think; and it’s about queerness, love, acceptance and, most importantly, hope for the future."—Hypable

"Gould’s atmospheric writing mesmerized me while reading . . . In the veins of V.E. Schwab and Courtney Summers, Gould delivers a spine-chilling and eerie debut with The Dead and the Dark that will leave readers hooked from the first page."—The Nerd Daily

"For fans of books like authors like Courtney Summers and Lisa Jewell, Courtney Gould’s debut novel The Dead and the Dark packs a chilling story of a murder conspiracy, family bonds, and the darkness that exists within the seams of society and even inside the most purest of people."—The Young Folks

"Gould's debut is an utterly dreamy romance in the midst of a living nightmare, and a true testament to the power of love in a world of hate. It's exactly the book we need right now."—Dahlia Adler, author of Cool for the Summer and editor of His Hideous Heart

"An absorbing mystery and wholly original ghost story. Gould’s writing is mesmerizing, drawing you into Snakebite until it slips under your skin and lingers like the Dark itself. A haunting story I won't shake off anytime soon."—Emma Berquist, author of Devils Unto Dust and Missing, Presumed Dead

"The Dead and the Dark has something for everyone: thrills, chills, a mystery that'll keep readers guessing and a romance they'll absolutely love rooting for. Snakebite is a setting as unforgettably alive as the characters who inhabit it and once it gets hold of you, it won't let go. A riveting, spooky and expertly-crafted debut from a talented new voice in YA fiction."—Courtney Summers, New York Times bestselling author of Sadie

"Gould’s debut has everything you need in a book: an engrossing mystery, a compelling love story, and a setting so utterly alive you won’t believe it isn’t on a map. The Dead and the Dark will keep you in its grasp until the last perfect page."—Erica Waters, author of Ghost Wood Song

"The Dead and the Dark gave me everything I want from a great supernatural murder mystery: a haunting small town, a fresh new romance, and the very best kind of monster—the kind we make ourselves.”—Francesca Zappia, author of Now Entering Addamsville and Eliza and Her Monsters

"Gould’s debut is haunting . . . Characters are the focal strength of this book, which is a slow-burn story with an immersive setting that feels like a character in and of itself. The darkness spreading over Snakebite exposes the truth about small-town ideology and oppression, loneliness, secrecy, and what makes a family or a home . . . This atmospheric, character-driven story is a must-read, but you should keep the lights on while you do."—Booklist

"Gould's supernaturally spooky debut is filled with all manner of creepy inventiveness . . . an intriguing read."—Publishers Weekly


BRANDON VOICEOVER: We’re back in the basement of the Calloway House in New Prague, Minnesota. Local legend says that Agatha Calloway once used this basement for satanic rituals, but no evidence...

Courtney Gould writes books about queer girls, ghosts, and things that go bump in the night. She graduated from Pacific Lutheran University in 2016 with a Bachelor’s degree in Creative Writing and Publishing. She was born and raised in Salem, OR, where she continues to write love letters to the haunted girls and rural, empty spaces. The Dead and the Dark is her debut novel.