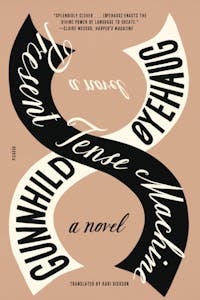 On an ordinary day in Bergen, Norway, in the late 1990s, Anna is reading in the garden while her two-year-old daughter, Laura, plays on her tricycle. Then, in one startling moment, Anna misreads a word, an alternate universe opens up, and Laura disappears. Twenty years or so later, life has gone on as if nothing happened. In each of the women’s lives, however, something is not quite right.

Both Anna and Laura continue to exist, but they are invisible to each other and forgotten in each other’s worlds. Both are writers and amateur pianists. Both are married; Anna had two more children after Laura disappeared, and Laura is expecting a child of her own. They worry about their families, their jobs, the climate—and whether this reality is all there is.

In the exquisite, wistful, slyly profound Present Tense Machine, Gunnhild Øyehaug delivers another dazzling renovation of what fiction can do, a testament to the fact that language shapes the world.

“As translated by Kari Dickson, all three [of Øyehaug’s] books also contain pleasurably unexpected descriptions and touches of humor . . . The novel is an ingenious pocket universe where time moves not just forward or even backward but in sideways leaps. Questions about the nature of reality are made poignant by the characters asking them: women struggling to understand who they are in the shadow of losses they can sense but not remember.”—Caitlin Horrocks, The New York Times Book Review

“Øyehaug is splendidly clever . . . But she’s also thoughtful, using her elaborately conceived, interconnected narrative spirals to ask questions about the relevance and importance of stories, and about connections between the literarily lived life and the literally lived life. Simultaneously, she inquires about and, in spite of everything, enacts the divine power of language to create.”—Claire Messud, Harper’s

“Heartfelt and heartbreaking . . . Kari Dickson, who translated Øyehaug's two prior English-language books, repeatedly evokes these ‘infinite universes’ in luxuriant sentences . . . And she beautifully conveys the soft emotions characteristic of Øyehaug's writing . . . Øyehaug's utterly unique novel will sit with you long after you finish playing your part.”—Cory Oldweiler, Minneapolis Star Tribune

“Seamlessly translated . . . As an ingeniously constructed ‘machine,’ Øyehaug's novel evokes a cosmos that can simultaneously expand and compress.”—Thúy Ðinh, NPR

“Playful . . . There’s a cheekiness and charm to Present Tense Machine that makes it difficult not to enjoy, even love, this book.”—Ian Mond, Locus

“At once playful and philosophical . . . The overall effect of loss and sense of missed connections makes for a powerful and unpredictable read.”—Tobias Carroll, Tor.com

"Present Tense Machine is a book for those who have felt themselves grieving something just beyond their comprehension, or anyone who suspects they're living in a parallel universe. Gunnhild Øyehaug is a magician of the highest rank, one who can make reality itself shimmer and splinter before coming back into focus, clearer than ever."—Catherine Lacey, author of Pew

"This gently humorous and slyly elegiac novel resonates with the reader long after it is over, like the last masterfully struck chord on a piano. Winding through deft meditations on the big bang and the origins of language, avant-garde musical compositions and UFOs, I was deeply moved by how Gunnhild Øyehaug reveals the yearning and the reverence we feel for the alternate lives we do not live, the love we might have known."—Mary South, author of You Will Never Be Forgotten

"A slippery metafictional take on the peril and power of words and how identities fracture and compartmentalize across a lifetime, from one of the most exciting contemporary voices in international literature . . . Another masterful translation by Dickson of Øyehaug's wily, mercurial prose . . . A perfect Mobius strip of a novel that playfully examines the creative and destructive potential of language."—Kirkus Reviews (starred review)

"Playful and poignant . . . The ruminations on existence and purpose consistently captivate . . . Øyehaug steers this to a wholly satisfying conclusion."—Publishers Weekly

There are student flats above and below them, and another across the landing. The students quite often party together, from Thursday to Sunday. For example, Laura might be sitting reading...

Gunnhild Øyehaug; Translated from the Norwegian by Kari Dickson

Gunnhild Øyehaug is an award-winning Norwegian poet, essayist, and fiction writer. FSG has published her story collection Knots as well as her novel Wait, Blink, which was adapted into the acclaimed film Women in Oversized Men’s Shirts. Øyehaug lives in Bergen, where she teaches creative writing.

Kari Dickson was born in Edinburgh, Scotland, and grew up bilingual. She has a BA in Scandinavian studies and an MA in translation. Her translation of Brown, written by Håkon Øvreås and illustrated by Øyvind Torseter, won the 2020 Mildred L. Batchelder Award. Before becoming a translator, she worked in theater in London and Oslo.