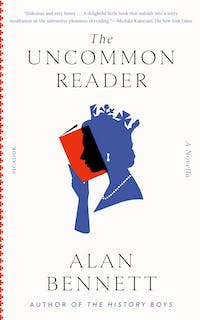 The Uncommon Reader is a novella that celebrates the pleasure of reading. When the Queen in pursuit of her wandering corgis stumbles upon a mobile library, she feels duty bound to borrow a book. Aided by Norman, a young man from the palace kitchen who frequents the library, Bennett describes the Queen's transformation as she discovers the liberating pleasures of the written word. With the poignant and mischievous wit of The History Boys, one of England's best loved authors shows that literature can change even the most uncommon reader's life.

"Alan Bennett's The Uncommon Reader arrives like a sorbet. Trained in structure and economy by his decades of writing plays, and blessed with what can seem a peculiarly English gift for blurring fondness and irreverence, Bennett appears cowed not at all by the task of removing Queen Elizabeth II from her throne and brings her down to earth with an easy warmth and wit that allows her to keep her brisk authority while coming to seem as endearingly human as a somewhat distant aunt . . . Such as premise cannot be handled roughly, and Bennett develops it directly and efficiently through a few short pages, till we feel we are in a Beyond the Fringe skit that is evolving into a surprisingly touching portrait of how reading can extend the imagination, not always to happy effect . . . The deeper irony that Bennett teases out, without a single wasted breath, is that books, by enlarging and deepening the Queen, render her ever more unfit for her job. She has less and less patience for her workday duties, and feels ever more the constraints of her prosaic position . . . In one classic moment, the book she has brought along to read after opening Parliament (and hidden behind a cushion in her carriage) suddenly disappears. A young footman whom she questions thinks it has probably been exploded . . . The Uncommon Reader takes us into those blended moods in which we don't know what to think . . . Bennett's queen, wonderfully, alights on books that make no sense at all and play with one's sense of possibility."—Pico Iyer, The New York Review of Books

“A delicious and very funny what-if . . . a delightful little book that unfolds into a witty meditation on the subversive pleasures of reading . . . Mr. Bennett has written a captivating fairy tale . . . a tale that showcases its author's customary élan and keen but humane wit.” —Michiko Kakutani, The New York Times

"The Uncommon Reader, [Bennett's] new novella, is a kind of palace fairy tale for grown-ups. Once again he tells a story about an eccentric old lady, a character type he seems to enjoy . . . This time, his odd, isolated heroine is the queen of England. The story of her budding love affair with literature blends the comic and the poignant so smoothly it can only be by Bennett."—Jeremy McCarter, The New York Times Book Review

"The delights of Alan Bennett's The Uncommon Reader begin with its title, a gentle but deft play on words, and flow forth in easeful perfection for the 120 pages that follow. (The infallible Mr. Bennett is the Brit responsible for such wonderful imports as Beyond the Fringe, Talking Heads and The History Boys.) The Uncommon Reader is quite lovely in ambition: a little cameo that, if you look closely, is about a very public woman waking up, late in life, to the fact that she has seen everything but the world."—Stephen Metcalf, The New York Observer

"Clever and entertaining . . . In its witty, economical satire, The Uncommon Reader recalls the late work of Muriel Spark . . . The Uncommon Reader is a celebration of both reading and its counterpart, independent thinking."—Maud Newton, Los Angeles Times

"In this charming novella Alan Bennett imagines what might occur if the sovereign of England, Queen Elizabeth herself, were suddenly to develop a ravenous passion for books. What might in less capable hands result in a labored exercise or an embarrassing instance of literary lèse-majesté here becomes a delicious light comedy, as well as a meditation on the power of print . . . You can finish The Uncommon Reader in an hour or two, but it is charming enough and wise enough that you will almost certainly want to keep it around for rereading—unless you decide to share it with friends. Either way, this little book offers what English readers would call very good value for money."—Michael Dirda, The Washington Post

"The conceit offered here by Mr. Bennett, the beloved British author and dramatist, is that a woman of power can find and love the power in books. It is a simple equation and one that yields deep rewards. In what is a surprising and surprisingly touching novella, Mr. Bennett shows us why books matter to the queen, his ‘uncommon' reader and why they matter so much to the rest of us . . . By the time the book reaches its hilarious and stunning conclusion, which I won't reveal here, a reader leaves wishing for more."—Carol Herman, The Washington Times

"What one wouldn't give to be a fly within Buckingham Palace walls. Only then could one witness the royal reaction to The Uncommon Reader, Alan Bennett's deliciously funny fantasia about Queen Elizabeth."—Kerry Fried, Newsday

"[Bennett] dispenses his observations on the purpose of reading . . . with the light hand of true authority."—The Atlantic Monthly

"Bennett has crafted a novella, of which the only complaint is that one wishes there were more, more, more of this charming, genteel, beguiling (and in one passage, gloriously bawdy) story."—Greg Robertson, Woman's Day

"Bennett's absorption with royalty in works like A Question of Attribution and The Madness of King George III has sometimes seemed more cosy than critical, as if he were anxious to join the very establishment he purports to mock. Subtler than either of these in its playfulness, The Uncommon Reader improves delightfully on an otherwise depressing reality, while slily arraigning the ambiguous British romance with the monarchy and its current avatar."—Jonathan Keates, The Times Literary Supplement (London)

"An exquisitely produced jewel of a book . . . a savagely Swiftian indignation against stupidity, philistinism, and arrogance in public places, and a passionate argument for the civilizing power of art."—Jane Shilling, The Times (London)

"Bennett had the bright idea of giving the queen a life, and the genius of The Uncommon Reader is to propose that the only new life a lady approaching eighty might plausibly have is a reading life . . . George Eliot argued that reading novels exercises and strengthens the muscle of human sympathy, and that caring about people in books makes us more caring about them in life: thus do novel-readers learn what Dorothea Brooke more painfully learns in Middlemarch, that even the desiccated Mr. Casaubon has 'an equivalent centre of self.' In his deadpan offhand way, Alan Bennett echoes George Eliot's point . . . With charm and intelligence, The Uncommon Reader engages the uses—and the decline—of reading . . . Throughout The Uncommon Reader, wit compensates for the inevitable and inconceivable, and comedy trumps tragedy, debility, even banality. Like George Eliot's masterpiece, Alan Bennett's novella about reading serves as an advertisement for itself, as well as a lovely book about aging—tender, forgiving, and even humorous in the face of death."—Rachel M. Brownstein, Commonweal

“[Bennett's] subtle wit and tonal command show why he is so beloved in his native Britain.”—Kirkus Reviews

"British screenwriter, playwright, and novelist Bennett, author of the Tony Award-winning play The History Boys, has written a wry and unusual story about the subversive potential of reading. Bennett posits a theoretical situation in which Queen Elizabeth II becomes an avid reader, and the new ideas she thus encounters change the way she thinks and reigns. Coming upon a traveling library near Buckingham Palace, Elizabeth, who almost never reads, decides to take a look. Mostly out of politeness, she begins to borrow from the library via a kitchen page. As she begins to view reading as her ‘duty,' a way ‘to find out what people are like,' she is exposed to increasingly sophisticated books and ideas that criticize society. As Elizabeth loses interest in the chain of ship launches and groundbreakings that make up her reign, her staff becomes resentful, and the story ends in an unexpected way."—Christina Bauer, Library Journal

“Bennett's jokes are so beautifully modulated.... The Uncommon Reader is a piece of audacious lèse majesté which, in an earlier age, would have put its author's head on a spike.... Bennett knows what he is doing.” —The Guardian

“A kind of palace fairy tale for grown-ups.... [[Bennett's]] account of the queen's adventures often made me laugh out loud.” —Jeremy McCarter, The New York Times


“Alan Bennett is one of the greatest comic writers alive, and The Uncommon Reader is Bennett at his best--touching, thoughtful, hilarious, and exquisite in its observations.” —Helen Fielding, author of Bridget Jones's Diary

“Hilarious and stunning . . . The conceit offered here by Mr. Bennett, the beloved British author and dramatist, is that a woman of power can find and love the power in books. It is a simple equation and one that yields deep rewards. In what is a surprising and surprisingly touching novella, Mr. Bennett shows us why books matter to the queen, his "uncommon reader" and why they matter so much to the rest of us.” —Carol Herman, The Washington Times

“One of the most subtly ingratiating prose stylists of our time . . . charming enough and wise enough that you will certainly want to keep it around for rereading--unless you decided to share it with friends.” —Michael Dirda, The Washington Post

“Clever and entertaining . . . The Uncommon Reader is a celebration of both reading and its counterpart, independent thinking.” —Maud Newton, Los Angeles Times

At Windsor it was the evening of the state banquet and as the president of France took his place beside Her Majesty, the royal family formed up behind and the procession slowly moved off and through into the Waterloo Chamber.

Alan Bennett has been one of England's leading dramatists since the success of Beyond the Fringe in the 1960s. His work includes the Talking Heads television series, and the stage plays Forty Years On, The Lady in the Van, A Question of Attribution, and The Madness of King George III. His play The History Boys, filmed in 2006, won six Tony Awards, including best play. His memoir, Untold Stories, was a number-one bestseller in the United Kingdom.