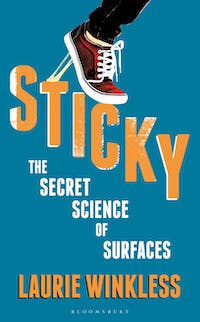 An exploration of the amazing world of surface science from the author of Science and the City.

You are surrounded by stickiness. With every step you take, air molecules cling to you and slow you down; the effect is harder to ignore in water. When you hit the road, whether powered by pedal or engine, you rely on grip to keep you safe. The Post-it note and glue in your desk drawer. The non-stick pan on your stove. The fingerprints linked to your identity. The rumbling of the Earth deep beneath your feet, and the ice that transforms waterways each winter. All of these things are controlled by tiny forces that operate on and between surfaces, with friction playing the leading role.

In Sticky, Laurie Winkless explores some of the ways that friction shapes both the manufactured and natural worlds, and describes how our understanding of surface science has given us an ability to manipulate stickiness, down to the level of a single atom. But this apparent success doesn't tell the whole story. Each time humanity has pushed the boundaries of science and engineering, we've discovered that friction still has a few surprises up its sleeve.

So do we really understand this force? Can we say with certainty that we know how a gecko climbs, what's behind our sense of touch, or why golf balls, boats and aircraft move as they do? Join Laurie as she seeks out the answers from experts scattered across the globe, uncovering a stack of scientific mysteries along the way.

Laurie Winkless is a physicist and science writer. She is an experienced science communicator, who loves to talk about science in all forms of media – she's given a TEDx talk, worked as a physics news reporter for the Naked Scientists, appeared in the Saturday Times Magazine, provided nanotechnology training for teachers, and exhibited at the Royal Society Summer Science Exhibition.
Laurie's first book, Science and the City, was published by Sigma in August 2016. She regularly contributes to Forbes, How It Works and Materials Today and has recently had her work featured in Wired, Esquire, the Evening Standard, Natural History Magazine and the Guardian.