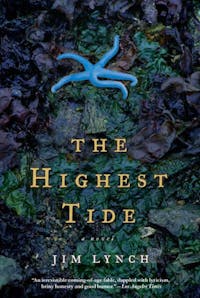 One moonlit night, thirteen-year-old Miles O'Malley slips out of his house, packs up his kayak and goes exploring on the flats of Puget Sound. But what begins as an ordinary hunt for starfish, snails, and clams is soon transformed by an astonishing sight: a beached giant squid. As the first person to ever see a giant squid alive, the speed-reading Rachel Carson-obsessed insomniac instantly becomes a local curiosity. When he later finds a rare deepwater fish in the tidal waters by his home, and saves a dog from drowning, he is hailed as a prophet. The media hovers and everyone wants to hear what Miles has to say.

But Miles is really just a teenager on the verge of growing up, infatuated with the girl next door, worried that his bickering parents will divorce, and fearful that everything, even the bay he loves, is shifting away from him. While the sea continues to offer up discoveries from its mysterious depths, Miles struggles to deal with the difficulties that attend the equally mysterious process of growing up. In this mesmerizing, beautifully wrought first novel, we witness the dramatic sea change for both Miles and the coastline that he adores over the course of a summer—one that will culminate with the highest tide in fifty years.

"[A] graceful and inventive first novel . . . [Lynch's] declarative style and vivid imagery allow the science of the ocean to blend easily with its poetry."—The New York Times Book Review

"Wryly funny, achingly sad and endearingly hopeful . . . the kind of book you can't put down, and the kind you'll pick up again."—Denver Post

"In stunning prose, author Jim Lynch puts a sea life into a kaleidoscope where swirling shapes burst and reconfigure in continuous life-affirming wonder . . . The balance of elegance, groundedness and style is remarkable."—San Francisco Chronicle

"In The Highest Tide, Jim Lynch has written a masterful first novel, gracefully weaving together the wonders of the sea and the wonders of our humanity. Seeing the world through the eyes of narrator, Miles O'Malley, is to see the world with a rapturous freshness. This is an exciting debut."—Robert Olen Butler, Pulitzer Prize-winning author of A Good Scent from a Strange Mountain

"The Highest Tide is a plunge into sustained and intelligent wonder. Jim Lynch creates a richly tumultuous world on a microcosmic stage. His characters and events are as complex and surprising as the sea that surrounds them. He's got me rereading Rachel Carson and itching for tide pools of my own."—Katherine Dunn, author of Geek Love

"Jim Lynch has written a breathtakingly beautiful first novel. At its core is a fabulous metaphor, rising from the ocean to wrap around this painful story with all the brilliance and mystery of life. That is a big statement. Lynch can carry its weight and then some."—Martha McPhee, author of Gorgeous Lies

"The fertile strangeness of marine tidal life becomes a subtly executed metaphor for the bewilderments of adolescence in this tender and authentic coming-of-age novel, Lynch's first. As a precocious, undersized 13-year-old living on the shore of Puget Sound, in Washington State, Miles O'Malley has developed a consuming passion for the abundant life of the tidal flats. His simple pleasure in observing is tested and complicated over the course of a remarkable summer, when he finds a giant squid, a discovery that brings him the unwelcome attention of scientists, TV reporters and a local cult. Meanwhile, Miles's remote parents are considering a divorce; his best friend, Florence, an elderly retired psychic, is dying of a degenerative disease; his sex-obsessed buddy, Phelps, mocks his science-geek knowledge; and his desperate crush on Angie Stegner, the troubled girl next door, both inspires and humiliates him. Events build toward the date of a record high tide, and Miles slowly sorts out his place in the adult world . . . This moving, unusual take on the summers of childhood conveys a contagious sense of wonder at the variety and mystery of the natural world."—Publishers Weekly (starred review)

Jim Lynch spent four years as the Puget Sound reporter for the Oregonian, and has won national journalism awards and published short fiction in literary magazines. A Washington state native, Lynch currently writes and sails from his home in Olympia, where he lives with his wife and daughter. The Highest Tide is his first novel.