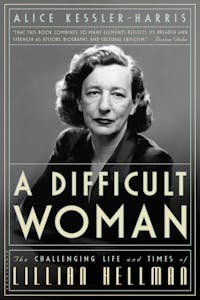 Lillian Hellman was a giant of twentieth-century letters and a groundbreaking figure as one of the most successful female playwrights on Broadway. Yet the author of The Little Foxes and Toys in the Attic is today remembered more as a toxic, bitter survivor and literary fabulist, the woman of whom Mary McCarthy said, "Every word she writes is a lie, including 'and' and 'the.'" In A Difficult Woman, renowned historian Alice
Kessler-Harris undertakes a feat few would dare to attempt: a reclamation of a combative, controversial woman who straddled so many political and cultural fault lines of her time.

Kessler-Harris renders Hellman's feisty wit and personality in all of its contradictions: as a non-Jewish Jew, a displaced Southerner, a passionate political voice without a party, an artist immersed in commerce, a sexually free woman who scorned much of the women's movement, a loyal friend whose trust was often betrayed, and a writer of memoirs who repeatedly questioned the possibility of achieving truth and doubted her memory.

Hellman was a writer whose plays spoke the language of morality yet whose achievements foundered on accusations of mendacity. Above all else, she was a woman who made her way in a man's world. Kessler-Harris has crafted a nuanced life of Hellman, empathetic yet unsparing, that situates her in the varied contexts in which she moved, from New Orleans to Broadway to the hearing room of HUAC. A Difficut Woman is a major work of literary and intellectual history.

"Kessler-Harris portrays a complex woman . . . Though much has been written about Hellman, readers will enjoy this reexamination of what Kessler-Harris calls a ‘juicy character' in the rarefied New York literary set, one who led a life filled with sex, scandals, art, and ideas. This biography of one of the most controversial women of the twentieth century, written by an award-winning, renowned historian, sure to receive plenty of critical attention."—Booklist (starred review)"Superb . . . Kessler-Harris provides in-depth analyses and objective commentary in a seamless, comprehensive biographical portrait . . . this thoughtfully crafted work of scholarship, supported by extensive research and interviews, illuminates the life and output of a major literary figure as well as the times in which she lived. It will appeal to a wide readership."—Library Journal (starred review)"Kessler-Harris offers a nuanced, fair-minded, and engrossing portrait of a controversial but indelible 20th-century personality."—Publishers Weekly

Alice Kessler-Harris is the R. Gordon Hoxie Professor of American History at Columbia University, in New York City. She is one of America's most renowned scholars, known for her work on labor and gender history. She is the author of the classic history of working women, Out to Work. Her In Pursuit of Equity: Women, Men, and the Quest for Economic Citizenship in Twentieth Century America won the Joan Kelly, Philip Taft, Herbert Hoover, and Bancroft Prizes. In 2012 she served as President of the Organization of American Historians.