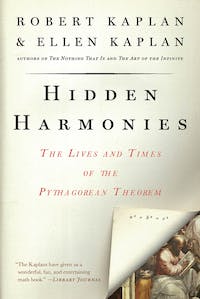 A squared plus b squared equals c squared. It sounds simple, doesn't it? Yet this familiar expression opens a gateway into the riotous garden of mathematics, and sends us on a journey of exploration in the company of two inspired guides, Robert and Ellen Kaplan. With wit, verve, and clarity, they trace the life of the Pythagorean theorem, from ancient Babylon to the present, visiting along the way Leonardo da Vinci, Albert Einstein, President James Garfield, and the Freemasons—not to mention the elusive Pythagoras himself, who almost certainly did not make the statement that bears his name. As in the authors' bestselling The Nothing That Is and Chances Are..., the excitement of mathematics leaps from the pages of Hidden Harmonies.

"Right up front, [the Kaplans] declare the consensus of historians of mathematics: Pythagoras did not in fact create his eponymous assertion; at most, he might have provided the first compelling proof of its validity. The authors instead trace the roots of the theorem to the dawn of civilization, and to a host of mathematicians, named and anonymous . . . The authors succeed in explaining the arcane aspects of the subject, and they are diligent in situating the Pythagorean theorem within the historical rise of mathematics. That they revel in the subject is clear."—The Wall Street Journal

"The book possesses an alluring lyricism and a good sense of humor . . . 'The style of a proof reflects the character of its maker,' declare the Kaplans, and the best part of their book is watching them render editorial judgments on various proofs throughout history . . . One cannot help but think that Pythagoras, who believed in the transmigration of the soul, and who believed his own soul had once belonged to a prostitute, a fisherman, a son of Hermes, and a peacock, among other beings, is more truly reincarnated in all these proofs as they reverberate up through the centuries."—Boston Globe

"Hidden Harmonies is a stunning book, taking the most classic theorem in mathematics md exposing its story, its human story for what it really is: true poetry."—James Tanton, Educator, Mathematician, and author of The Encyclopedia of Mathematics

"The Kaplans have given us a wonderful, fun, and entertaining math book."—Library Journal

"The Kaplans sinuously weave personalities into the history of proving Pythagoras correct . . . They explore proofs proffered by characters historical (James Garfield), obsessive (Elisha Loomis, a teacher who anthologized proofs), and inspiring (a blind woman, E. Coolidge, who devised an original proof). Born of geometry, the theorem proves to be a creature of metamorphosis, appearing in branches of math fi math from number theory to calculus. Showing the theorem s endless versatility, the Kaplans and their logic- and symbol-permeated text will engage those who delight in doing the math."—Gilbert Taylor, Booklist

"The Kaplans are wonderfully chatty hosts . . . [They] combine math history and theory with humor, compelling tidbits, and helpful equations (along with an analysis of tangrams) to create an entertaining and stimulating book for the mathematically inclined."—Publishers Weekly

Robert and Ellen Kaplan have taught mathematics to people from six to sixty, at leading independent schools and, most recently, at Harvard University. Robert Kaplan is the author of the bestselling The Nothing That Is: A Natural History of Zero, which has been translated into 10 languages, and together they wrote The Art of the Infinite and Out of the Labyrinth. Ellen Kaplan is also co-author of Chances Are: Adventures in Probability and Bozo Sapiens: Why to Err Is Human, co-written with her son Michael Kaplan. They live in Southampton, Massachusetts.