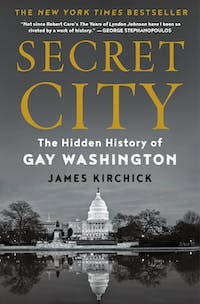 For decades, the specter of homosexuality haunted Washington. The mere suggestion that a person might be gay destroyed reputations, ended careers, and ruined lives. At the height of the Cold War, fear of homosexuality became intertwined with the growing threat of international communism, leading to a purge of gay men and lesbians from the federal government. In the fevered atmosphere of political Washington, the secret “too loathsome to mention” held enormous, terrifying power.

Utilizing thousands of pages of declassified documents, interviews with over one hundred people, and material unearthed from presidential libraries and archives around the country, Secret City is a chronicle of American politics like no other. Beginning with the tragic story of Sumner Welles, Franklin Delano Roosevelt’s brilliant diplomatic advisor and the man at the center of “the greatest national scandal since the existence of the United States,” James Kirchick illuminates how homosexuality shaped each successive presidential administration through the end of the twentieth century. Cultural and political anxiety over gay people sparked a decades-long witch hunt, impacting everything from the rivalry between the CIA and the FBI to the ascent of Joseph McCarthy, the struggle for Black civil rights, and the rise of the conservative movement. Among other revelations, Kirchick tells of the World War II–era gay spymaster who pioneered seduction as a tool of American espionage, the devoted aide whom Lyndon Johnson treated as a son yet abandoned once his homosexuality was discovered, and how allegations of a “homosexual ring” controlling Ronald Reagan nearly derailed his 1980 election victory.

Magisterial in scope and intimate in detail, Secret City will forever transform our understanding of American history.

“Secret City, by James Kirchick, is a sprawling and enthralling history of how the gay subculture in Washington, D.C., long in shadow, emerged into the klieg lights . . . A luxurious, slow-rolling Cadillac of a book, not to be mastered in one sitting. As an epic of a dark age, complex and shaded, Secret City is rewarding in the extreme."—The New York Times

“The truth most clearly revealed by Kirchick’s focus on Washington is one that queer historians have emphasized for years: that change was prompted not by those in the halls of power but by activists working well outside of them . . . So many of those whom Kirchick chronicles seem more compromised by their proximity to power than emboldened by it. That is also a part of the story of gay life in the United States, and Kirchick tells it well.”—The New Yorker

“A robust and meaningful history . . . Smartly written with a flexible aperture for capturing the big picture of a moment and narrowing in on the tiniest of details.”—TIME

“With Secret City . . . Kirchick will be catapulted into the ranks of those journalists whose work will be read for generations.”—The New York Sun

“Engrossing, novelistic, and deeply sympathetic to minorities persecuted in the last century . . . A comprehensive and deeply humane work of history.”—Washington Monthly

“A riveting and sober look at American history.”—Arlington Magazine

“Secret City is itself full of high-grade gossip, and I mean that as a compliment. But Kirchick is up to serious business as well . . . This broad sweep should make this book the standard on its subject.”—Reason

“In Secret City, James Kirchick has written a delicious page-turner that’s also an important and masterly work of American history.”—Commentary

“Scrupulously researched and novelistic in style, Secret City is an extraordinary achievement. In this spellbinding journey from the New Deal to the end of the Cold War, James Kirchick draws us into the demimonde of Gay Washington: a dangerous world swirling with informers, scandal sheets, blacklists, clandestine networks, and brave fighters for equality. Shedding new light on figures we thought we knew, he introduces us to compelling individuals we will never forget. Not since Robert Caro’s Years of Lyndon Johnson have I been so riveted by a work of history. Secret City is not gay history. It is American history.”—George Stephanopoulos

"In Secret City, James Kirchick tells a Washington DC Cold War story that few have heard: How the political obsession with secrecy together with the fear of communist influence distorted perceptions not only of gay people, but of reality itself. Weaving together political, social and cultural history, Secret City offers an unexpected corrective to the historical record."—Anne Applebaum, Pulitzer Prize–winning author of Gulag and Iron Curtain

“A remarkable, hugely impressive accomplishment—exhaustively researched, skillfully told, erudite, heartfelt—that speaks not only to the impact of double lives on our nation’s life but also to the individual toll of veiling your soul. It makes me sad. But more than that, it makes me grateful, for all that has changed since those days of lies and whispers.”—Frank Bruni, contributing opinion writer, The New York Times

“Kirchick takes us from the FDR administration to Bill Clinton with a thoroughness and eye for detail that astonish. Lovers of Washington lore will enjoy the depiction of gay life in the nation's capital when it was entirely underground, and lovers of justice will take pleasure in the fact that some of the most repulsive characters in modern political history who ruined so many lives and careers are brought to justice in the only way they can be now: the historical record.”—Andrew Holleran, author of Dancer from the Dance

“Now and then a new book about American politics comes along for which 'revelation' seems too tame a word, so profoundly does it alter our understanding of almost everything we thought we knew. James Kirchick’s remarkable history of the 'secret' life of Washington is just such a book—a triumph of investigation and story-telling.”—Sam Tanenhaus, author of Whittaker Chambers: A Biography and former editor of The New York Times Book Review

“Secret City is a sweeping, grand look at what once was forced to be hidden. In his deeply researched narrative, Kirchick has restored men and women lost to history due to their sexuality, and in doing so he shines a new light on our understanding of politics and government. Evoking memories of And the Band Played On, this look at the 'secret city' makes our history clear.”—John A. Farrell, author of Richard Nixon: The Life

“Kirchick has written a mesmerizing and moving account of gay proximity to power, and the shocking resistance to it, in America's capital city long before the modern gay-rights movement began. Thanks to Kirchick, this important history will be overlooked no more.”—Dale Carpenter, author of Flagrant Conduct: The Story of Lawrence v. Texas

“In this absorbing and well-documented book, Kirchick engagingly draws attention to a variety of gay histories that have been largely lost to mainstream history. Ambitious and convincing . . . the book offers countless illuminating stories that have been grossly underserved in past political histories. An important addition to American history.”—Kirkus Reviews

“Kirchick’s history is an inspiring and overdue tribute to the brave individuals who fought for acceptance in a city and government long pitted against them.”—Booklist (starred review)


Sumner Welles had a secret.

It was a secret that, in 1940, the forty-seven-year-old undersecretary of state had in common with thousands of other men and women across Washington, DC, a swampy southern town not...

James Kirchick has written about human rights, politics, and culture from around the world. A columnist for Tablet magazine, a writer at large for Air Mail, and a nonresident senior fellow at the Atlantic Council, he is the author of The End of Europe: Dictators, Demagogues, and the Coming Dark Age. Kirchick’s work has appeared in the New York Times, the Washington Post, the Wall Street Journal, the Atlantic, the New York Review of Books, and the Times Literary Supplement. A graduate of Yale with degrees in history and political science, he resides in Washington, DC.

Read Articles by the Author at Muckrack