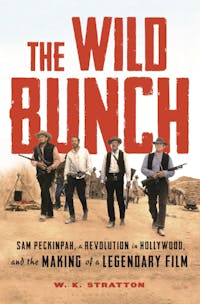 Sam Peckinpah’s film The Wild Bunch is the story of a gang of outlaws who are one big steal from retirement. When their attempted train robbery goes awry, the gang flees to Mexico and falls in with a brutal general of the Mexican Revolution, who offers them the job of a lifetime. Conceived by a stuntman, directed by a blacklisted director, and shot in the sand and heat of the Mexican desert, the movie seemed doomed. Instead, it became an instant classic with a dark, violent take on the Western movie tradition.

In The Wild Bunch, W.K. Stratton tells the fascinating history of the making of the movie and documents for the first time the extraordinary contribution of Mexican and Mexican-American actors and crew members to the movie’s success. Shaped by infamous director Sam Peckinpah, and starring such visionary actors as William Holden, Ernest Borgnine, Edmond O’Brien, and Robert Ryan, the movie was also the product of an industry and a nation in transition. By 1968, when the movie was filmed, the studio system that had perpetuated the myth of the valiant cowboy in movies like The Searchers had collapsed, and America was riled by Vietnam, race riots, and assassinations. The Wild Bunch spoke to America in its moment, when war and senseless violence seemed to define both domestic and international life.

The Wild Bunch is an authoritative history of the making of a movie and the era behind it.

"In his detailed and passionately argued history of The Wild Bunch, writer W.K. Stratton takes the debate to a higher level and convincingly positions the film as the best Western ever made—and among the greatest of movies. Stratton collects the kinds of elements required for a lively movie backstory: a talented if irascible director, quirky cast and crew members, a difficult location shoot and a controversial reception by moviegoers and critics. Best of all, he recounts how an idea becomes a film and the creative, economic and fate-driven roadblocks it faces."—Associated Press

"Sam Peckinpah’s classic western is lovingly picked over in this obsessive treatment of its making and reception."—The New York Times Book Review

"Definitive . . . Stratton’s book is part making-of chronicle, part appreciation, part personal reminiscence. . . . He’s not a film critic, but a passionate and knowledgeable generalist who knows how to drill deep."—Vulture

W.K. Stratton is the author of five books of nonfiction and three of poetry. He has written for Sports Illustrated, Outside, GQ, and Texas Monthly, and was named a fellow of the Texas Institute of Letters in 2017. He is a longtime resident of Austin, Texas.