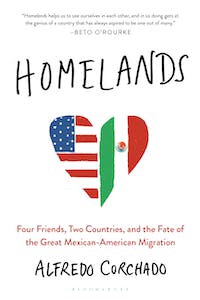 When Alfredo Corchado moved to Philadelphia in 1987, he felt as if he was the only Mexican in the city. But in a restaurant called Tequilas, he connected with two other Mexican men and one Mexican American, all feeling similarly isolated. Over the next three decades, the four friends continued to meet, coming together over their shared Mexican roots and their love of tequila. One was a radical activist, another a restaurant/tequila entrepreneur, the third a lawyer/politician. Alfredo himself was a young reporter for the Wall Street Journal.

Homelands merges the political and the personal, telling the story of the last great Mexican migration through the eyes of four friends at a time when the Mexican population in the United States swelled from 700,000 people during the 1970s to more than 35 million people today. It is the narrative of the United States in a painful economic and political transition.

As we move into a divisive, nativist new era of immigration politics, Homelands is a must-read to understand the past and future of the immigrant story in the United States, and the role of Mexicans in shaping America's history. A deeply moving book full of colorful characters searching for home, it is essential reading.

"Corchado tells two stories at once—that of his life as a bicultural, naturalized American reporter and the larger saga of a migration surge that occurred at the same time . . . What’s clearest throughout is the extent to which sweeping global economic forces overwhelm the best-laid plans."—The Washington Post

“Homelands is an eloquently gripping testimonio, both a memoir of the author's struggles to develop a successful binational identity and a critique of our nation's shifting, fractured immigration policies.”—San Antonio Express News

"It’s a world that he describes with far more eloquence and clarity than I could muster in his new book . . . Corchado molds the personal, political, economic and historical into a narrative juxtaposing his life with the rise of Mexican populations in the United States."—Providence Journal

"[Homelands] eloquently chronicles the effects of the North American Free-Trade Agreement between Mexico, America and Canada, the militarisation of the border after the attacks of September 11th 2001, and Mr Trump’s victory."—The Economist

“Corchado's casual, friendly prose flies under the raging policy debates of the moment to engage us in incredibly personal stories of friendship and family. Before you realize it, he has defeated your cynicism and disarmed your political reflexes to bring you into a lively conversation on the nature of citizenship and culture in the most human of terms. Homelands helps us to see ourselves in each other, and in so doing it gets at the genius of a country that has always aspired to be one out of many.”—Beto O'Rourke

Alfredo Corchado is the Mexico Border correspondent for the Dallas Morning News and author of Midnight in Mexico. He is a Nieman, Lannan, USMEX, Woodrow Wilson, and Rockefeller fellow and the winner of the Maria Moors Cabot Prize and Elijah Parish Lovejoy Award for courage in journalism. Corchado lives in Mexico City but calls the border home. @ajcorchado