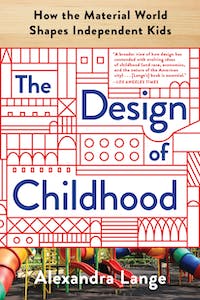 Parents obsess over their children's playdates, kindergarten curriculum, and every bump and bruise, but the toys, classrooms, playgrounds, and neighborhoods little ones engage with are just as important. These objects and spaces encode decades, even centuries of changing ideas about what makes for good child-rearing—and what does not. Do you choose wooden toys, or plastic, or, increasingly, digital? What do youngsters lose when seesaws are deemed too dangerous and slides are designed primarily for safety? How can the built environment help children cultivate self-reliance? In these debates, parents, educators, and kids themselves are often caught in the middle.

Now, prominent design critic Alexandra Lange reveals the surprising histories behind the human-made elements of our children's pint-size landscape. Her fascinating investigation shows how the seemingly innocuous universe of stuff affects kids' behavior, values, and health, often in subtle ways. And she reveals how years of decisions by toymakers, architects, and urban planners have helped-and hindered-American youngsters' journeys toward independence. Seen through Lange's eyes, everything from the sandbox to the street becomes vibrant with buried meaning. The Design of Childhood will change the way you view your children's world-and your own.

“Lange, an architecture critic, shows that the desire to foster children's creativity is not always served by the increased sophistication of playthings . . . [She] details the transformation of homes, schools, and cities to include space for play.”—The New Yorker

“As expected, the book contains chapters devoted to charting the history of important toys, such as wood blocks and Lego. But Design of Childhood casts a wider, more ambitious net, looking at the ways in which attention to children and their needs has helped shape design at large . . . Lange's work brings together topics that are generally covered in isolation. You'll find plenty of books on playground design, school design or toy design. It's much harder to find anything that weaves those strands together for a broader view of how design has contended with evolving ideas of childhood . . . In this regard, her book is essential.”—Los Angeles Times

“[Lange] might be the most influential design critic writing now. She brings her considerable powers, both as an observer of objects and spaces and as a writer of sentences, to The Design of Childhood, which provides history and commentary on toys, houses, schools, playgrounds, and cities . . . [and] reveals some significant social inequities . . . We all survived our childhoods. I think the real lesson of the book is that it's possible to do more than that.”—Los Angeles Review of Books

“The Design of Childhood is as revelatory with lessons about the history of design as it as with lessons about childhood . . . The book achieves the rare trick of staying relevant and compelling to an audience of planners and urban designers even when the subject ostensibly on matters of smaller scale than what we think of as the built environment.”—Planetizen, "Top Ten Urban Planning Books of the Year"

“It's normal for parents to obsess over their children: which school should they go to, which kids should they play with, what sport they should play. Design critic Alexandra Lange makes the case for the importance of objects and design in this canny new book, arguing that the way kids play (and the objects they play with) play an essential role in their development. Is there a difference between wood, plastic, or digital toys? What can kids learn from a see-saw or a slide? It may seem trivial but the way we play, Lange argues, reflects the way we live.”—ArchDaily

“An eye-opening look at how well-meaning designers, operating under the influence of ever-shifting philosophies, have long attempted to foster children's motivation and competence while, at the same time, keeping them safe, entertained, and out from underfoot. We applaud Lange's insight that—even if it inconveniences or worries the grownups of today—kids of all backgrounds deserve toys, school buildings, and playgrounds that will help cultivate the active, creative, inquiring grownups of tomorrow.”—Joshua Glenn & Elizabeth Foy Larsen, authors of Unbored

“From the Lego-covered living room rug to the contested streets of our contemporary cities, one of our greatest voices on design and architecture casts her eye, and critical acumen, on the spaces that children inhabit—and the way children inhabit those spaces—and the results are nothing short of spectacular. The Design of Childhood is like a secret guidebook to a landscape in which we all dwell, but so often fail to see.”—Tom Vanderbilt, bestselling author of Traffic and You May Also Like

“In a world in which stealthy corporate marketing and the allure of devices are consuming our children's attention and spirit, Alexandra Lange's learned and original perspective reveals the impact of enlightened design in stuff and spaces, old and new.”—Wendy Mogel, PH.D., New York Times-bestselling author of The Blessing of a Skinned Knee

“The Design of Childhood is an extraordinary book. Peering through the lens of children's play, Alexandra Lange deftly reveals the remarkable connection between freedom, creativity, and fun.”—Debbie Millman, host of Design Matters and author of Look Both Ways

“Like a fairy tale with the capacity to enthrall adults, Alexandra Lange's wonderful book about design for children is, in the end, the story of design for all of us. Lange's account of the way kids play, learn, and live has lessons for anyone who cares about the crafting of products, places, and experiences.”—Michael Bierut, partner of Pentagram and cofounder of Design Observer

“An informative road map for those who want to maximize their children's material environment . . . Parents and educators will discover a wealth of information to inspire and help 'make childhood a better place.'”—Kirkus Reviews

“[Lange] writes with both an academic's expertise and a journalist's hooks and accessibility . . . Lange's survey shows how kids learn to be creative, social citizens in these different spaces.”—Booklist

“Lange skillfully explores how the design of children's toys and built environments reflects evolving philosophies of child-rearing and development . . . Powerfully remind[s] readers of the importance of constructing spaces that make all people, including children, feel both welcomed and independent.”—Publishers Weekly

Alexandra Lange's writing has appeared in New York, the New York Times, Curbed, Dwell, The New Yorker, and many other magazines and design journals. She has authored and coauthored several previous books, including Writing About Architecture. Lange holds a Ph.D. in twentieth-century architecture history from the Institute of Fine Arts at New York University, and lives in Brooklyn with her family.