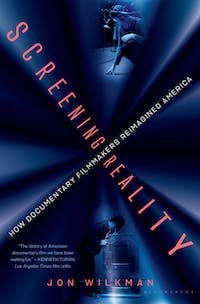 Amidst claims of a new “post-truth” era, documentary filmmaking has experienced a golden age. Today, more documentaries are made and widely viewed than ever before, illuminating our increasingly fraught relationship with what's true in politics and culture. For most of our history, Americans have depended on motion pictures to bring the realities of the world into view. And yet the richly complex, ever-evolving relationship between nonfiction movies and American history is virtually unexplored.

Screening Reality is a widescreen view of how American “truth” has been discovered, defined, projected, televised, and streamed during more than one hundred years of dramatic change, through World Wars I and II, the dawn of mass media, the social and political turmoil of the sixties and seventies, and the communications revolution that led to a twenty-first century of empowered yet divided Americans.

In the telling, professional filmmaker Jon Wilkman draws on his own experience, as well as the stories of inventors, adventurers, journalists, entrepreneurs, artists, and activists who framed and filtered the world to inform, persuade, awe, and entertain. Interweaving American and motion picture history, and an inquiry into the nature of truth on screen, Screening Reality is essential and fascinating reading for anyone looking to expand an understanding of the American experience and today's truth-challenged times.

“Fantastically well researched and written, Screening Reality raises the bar for anyone who wants to write about the history of documentaries and documentarians, with invaluable insights into today's truth-challenged times.”—Peter Davis, Academy Award-winning director of Hearts and Minds; author of Girl of My Dreams

“In Screening Reality, filmmaker Jon Wilkman provides a fascinating look at the many ways documentary (and so-called documentary) cinema has shaped and distorted our vision of American history. It is a remarkably comprehensive study, tracking the course of documentary film from the actualities conjured in Thomas Edison's Black Maria to the true crime series streamed on Netflix. Wilkman commands a skill set that is perfectly suited to the task, lacing his insights with the filmmaker's understanding of the craft and the historian's respect for the facts on record.”—Thomas Doherty, Professor of American Studies, Brandeis University

“Jon Wilkman offers an engaging, valuable history of American documentary and nonfiction media from the fresh and badly needed perspective of someone who has worked in the field—particularly television documentary—for fifty years. Lively, enjoyable and highly informative.”—Charles Musser, Professor of American Studies and Film & Media Studies at Yale University and producer/director of Errol Morris: A Lightning Sketch.

“Jon Wilkman's Screening Reality is both readable and informative. The entire history of documentary film in the U.S. is here, examined with efficiency and style. A truly splendid achievement.”—Anthony Slide, author of New York City Vaudeville and former Resident Historian at the Academy of Motion Picture Arts and Sciences

“An illuminating, encyclopedic history of nonfiction film . . . A capacious celebration of film's potential to show us the world.”—Kirkus Reviews

“A many-faceted, dynamic, and thought-provoking history of nonfiction films in America . . . This monumental exploration reminds us that 'evidential truth' is essential to liberty and justice . . . Let the real be real; let truth ring true.”—Donna Seaman, Booklist (starred review)

“Well-documented . . . Wilkman consistently cycles back to one important message: no matter how fuzzy the lines between fiction and fact, truth should be forefront in the minds of documentarians. Our supposedly post-truth era and the pitfalls and ease with which we augment reality are threads through the narrative . . . Wilkman makes a compelling case.”—Library Journal

“Enthralling . . . A valuable resource for cinephiles, this sweeping history will ignite a new enthusiasm for the form among readers less well-versed in the genre.”—Publishers Weekly (starred review)

Jon Wilkman is an author and award-winning filmmaker whose work has appeared on ABC, CBS, NBC, PBS, HBO and A&E. His seven-part Turner Classic Movies series, Moguls and Movie Stars: A History of Hollywood, was nominated for three Emmys. His previous book, Floodpath, was an Amazon Nonfiction Book of the Year. A founding member and three-term president of the International Documentary Association, Wilkman lives in Los Angeles.