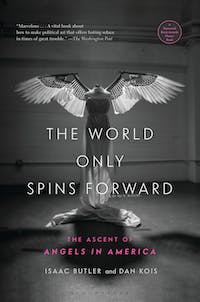 When Tony Kushner's Angels in America hit Broadway in 1993, it won the Pulitzer Prize, swept the Tonys, launched a score of major careers, and changed the way gay lives were represented in popular culture. Mike Nichols's 2003 HBO adaptation starring Meryl Streep, Al Pacino, and Mary-Louise Parker was itself a tour de force, winning Golden Globes and eleven Emmys, and introducing the play to an even wider public. This generation-defining classic continues to shock, move, and inspire viewers worldwide.

Now, on the 25th anniversary of that Broadway premiere, Isaac Butler and Dan Kois offer the definitive account of Angels in America in the most fitting way possible: through oral history, the vibrant conversation and debate of actors (including Streep, Parker, Nathan Lane, and Jeffrey Wright), directors, producers, crew, and Kushner himself. Their intimate storytelling reveals the on-and-offstage turmoil of the play's birth—a hard-won miracle beset by artistic roadblocks, technical disasters, and disputes both legal and creative. And historians and critics help to situate the play in the arc of American culture, from the staunch activism of the AIDS crisis through civil rights triumphs to our current era, whose politics are a dark echo of the Reagan '80s.

Expanded from a popular Slate cover story and built from nearly 250 interviews, The World Only Spins Forward is both a rollicking theater saga and an uplifting testament to one of the great works of American art of the past century, from its gritty San Francisco premiere to its starry, much-anticipated Broadway revival in 2018.

"A full-bodied portrait of Angels and the many people who nurtured it . . . A vivid, intelligently organized oral history . . . More than just the masterful story of one brilliant play, The World Only Moves Forward demonstrates the essentially collaborative nature of theater as an art form."—Wendy Smith, The Washington Post

"Like Angels in America itself, this oral history of Tony Kushner’s two-part, seven-hour theatrical masterwork contains multitudes . . . capturing the ongoing reverberance and currency of Angels. It also conveys, on a granular level, the determination, heartbreak and competitive fire that go into making great theater . . . The World Only Spins Forward both celebrates and illuminates a great work."—San Francisco Chronicle

"A fascinating, backstage tour . . . The point is not just to show how this play found its voice, but also to place it in context."—Bob Mondello, NPR

"[A] prodigiously reported and deeply engaging book by Isaac Butler and Dan Kois that traces the evolution of Tony Kushner's landmark two-part play about the AIDS crisis. This oral history is, like the play it chronicles, a masterpiece of its art form . . . the overall effect is like eavesdropping at a reunion of old friends once the boring folks have left and the good booze has been poured."—National Book Review

"The World Only Spins Forward is a tribute to a masterwork as well as evidence that Angels in America is as urgent today as it was when it premiered."—Esquire

"Ingenious . . . Captures all the twists and turns of fate that went into the two-part epic's creation with a sense of suspense and drama—from the joy and exuberance to the heartache . . . Butler and Kois place us on intimate terms with the play's characters, ideas, and humanity—and their book, a prescient reminder of the need to follow one's truth in the face of oppression and intolerance, will be an invaluable text for years to come."—Lambda Literary Review

"An illuminating assemblage of anecdotes, commentary, and nitty-gritty rehearsal notes . . . The World Only Spins Forward will stand as the definitive account of the birth, life, and legacy of Angels."—American Theatre

"[A] beautiful literary homage to [Kushner’s] theatrical sensation . . . Its true heart is found in the perspectives and opinions of hundreds of people associated with the play . . . The resounding voices of actors, authors, playwrights, critics, scholars, and many more echo throughout this impressive historical retrospective."—Bay Area Reporter

"Kois and Butler's sharp pruning and assembly of these lively conversations recreates a living, breathing version of the truth only possible via crowdsourcing . . . The story that emerges is not only one of unbelievable talent and hard work, or even the who's-getting-fired/who's-getting-hired gossip that thickens the broth of any good origin story; no, the real story is the sheer tenuousness of the play's grip on success. Its narrative reveals a number of turning points which, out of either happenstance or angelic interference, all went the right direction . . . Finishing the book . . . leaves the reader feeling as though they've been through something."—Milwaukee Magazine

"Compelling, surprising and inspiring . . . The World Only Spins Forward has everything you want in an oral history of Angels in America: historical context, funny and thoughtful memories from hundreds of eyewitnesses and a celebration of an enduring, powerful theater piece."—Shelf Awareness

"Tony Kushner's Angels in America is a significant accomplishment. Significant as well were the tremendous efforts that went into the making of it: the setbacks, doubts, battles, scenes considered and reconsidered, as well as the revelations and epiphanies. All of it is here in The World Only Spins Forward, a vital contribution to our understanding that a great play does not simply descend to Earth, fully formed, like an angel on a wire. This book should be required reading for anyone who cares about art in all its forms."—Michael Cunningham

"A meticulously textured oral history about an extraordinary work of art and the era of its creation, woven out of the words of the genius who created it and all of the artists, producers, and friends whose love, talent, and dedication made it possible."—Anna Deavere Smith

"A rich historical resource, the book chronicles the emergence of AIDS and the nation's changing attitudes toward homosexuality from 1978 to 2018, when Angels is set to be revived yet again . . . A chorus of candid, emotional, and often moving testimonies."—Kirkus Reviews

"A brash and buoyant oral history of Angels in America . . . This invaluable origin story also examines the AIDS era and queer history in general."—Booklist (starred review)

"The definitive history of this now iconic play in oral history format . . . This gathering of the voices of actors, writers, and others is exceptional . . . Highly recommended for anyone interested in performance, cultural history, and theater."—Library Journal (starred review)

Isaac Butler's writing has appeared in New York Magazine, Slate, the Guardian, and other publications. His theater directing work has been presented at the Brooklyn Academy of Music, the Public Theater, New York's Town Hall, and elsewhere.

Dan Kois is an editor and writer for Slate, where he launched the Slate Book Review, and a contributing writer for the New York Times Magazine. He is a frequent guest on Slate's Culture Gabfest.