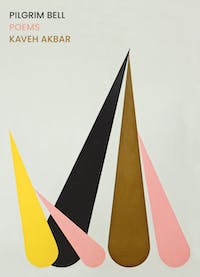 Longlisted for the PEN/Voelcker Award

With formal virtuosity and ruthless precision, Kaveh Akbar’s second collection takes its readers on a spiritual journey of disavowal, fiercely attendant to the presence of divinity where artifacts of self and belonging have been shed. How does one recover from addiction without destroying the self-as-addict? And if living justly in a nation that would see them erased is, too, a kind of self-destruction, what does one do with the body’s question, "what now shall I repair?" Here, Akbar responds with prayer as an act of devotion to dissonance—the infinite void of a loved one’s absence, the indulgence of austerity, making a life as a Muslim in an Islamophobic nation—teasing the sacred out of silence and stillness.

Richly crafted and generous, Pilgrim Bell’s linguistic rigor is tuned to the register of this moment and any moment. As the swinging soul crashes into its limits, against the atrocities of the American empire, and through a profoundly human capacity for cruelty and grace, these brilliant poems dare to exist in the empty space where song lives—resonant, revelatory, and holy.

“[Pilgrim Bell] is bracing in its honesty and noteworthy in its steadfast adherence to finding the spiritual in even the most mundane settings. Akbar’s mesmerizing dexterity with language is at its most compelling when he is relentlessly pursuing the truth—a hunt that’s present in every poem in this volume.”—TIME

“Emphatic and honest . . . Perfect on the page, the voice and personality of each poem are thoroughly, itchingly alive, with an intimacy that, for all its naked self-revelation, feels bound to be engaged in the work of nations.”—World Literature Today

“Pilgrim Bell is a book that chooses honesty over beauty, which makes it a breathtaking text.”—Hanif Abdurraqib

“Kaveh Akbar is truly a great writer, and his new collection Pilgrim Bell is a marvel. Like his previous work, it dazzles us . . . He is incapable of setting down a line that’s less than luminous. Pilgrim Bell is destined to become a classic, another blazing torch added to the eternal flames.”—Mary Karr

“Kaveh Akbar is the sorcerer’s sorcerer, masterful in the way he wields language for us, for these poems, to sound his Pilgrim Bell. Profound and singular, smart and sad and funny, but most of all truth’s beauty and beauty’s truth sung . . . We need Pilgrim Bell. We need Kaveh Akbar.”—Tommy Orange

“Working at and along the outer edges of language, Pilgrim Bell calls us to attention and to attend to that which poetry and prayer share, while simultaneously demanding that we tend to the political, the social, the erotic—all that is quotidian and human. Persimmons and empire; saffron and refugee camps; exile, oleander, and the Rolling Stones—all the stuff of poetry. And of prayer. In Pilgrim Bell, the poet Kaveh Akbar, ‘God’s incarnate spit in the mud,’ takes us down to the ground, to the prosaic, the dismissed and overlooked, the better to talk to the great Silence, bearer of many names including that of God.”—M. NourbeSe Philip

“Lyrical, profound, and honest, the kind of collection to which a reader will return.”—Library Journal (starred review)

Kaveh Akbar is the author of Calling a Wolf a Wolf and has received honors such as a Levis Reading Prize and multiple Pushcart Prizes. Born in Tehran, Iran, he teaches at Purdue University and in low-residency programs at Warren Wilson and Randolph Colleges.