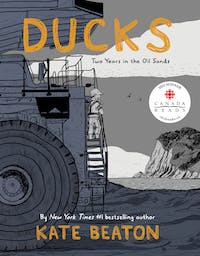 Before there was Kate Beaton, New York Times bestselling cartoonist of Hark! A Vagrant, there was Katie Beaton of the Cape Breton Beaton, specifically Mabou, a tight-knit seaside community where the lobster is as abundant as beaches, fiddles, and Gaelic folk songs. With the singular goal of paying off her student loans, Katie heads out west to take advantage of Alberta’s oil rush—part of the long tradition of East Coasters who seek gainful employment elsewhere when they can’t find it in the homeland they love so much. Katie encounters the harsh reality of life in the oil sands, where trauma is an everyday occurrence yet is never discussed.

Beaton’s natural cartooning prowess is on full display as she draws colossal machinery and mammoth vehicles set against a sublime Albertan backdrop of wildlife, northern lights, and boreal forest. Her first full length graphic narrative, Ducks: Two Years in the Oil Sands is an untold story of Canada: a country that prides itself on its egalitarian ethos and natural beauty while simultaneously exploiting both the riches of its land and the humanity of its people.

“Epic. Kate Beaton headed west [to] one of the world’s most environmentally destructive oil operations, where workers lived in barracks-like camps and men vastly outnumbered women. Her experience there . . . gave her an insider’s view into a place and piece of Canadian history few outsiders ever see.”—Robert Ito, The New York Times

“In this hefty, sublime graphic novel/memoir, Beaton invites readers into a lonely, alien world just outside our own.”—Patrick Rapa, The Philadelphia Inquirer

“What a difficult, gorgeous and abidingly humane book.”—Rachel Cooke, The Guardian

“A serious, moving, and heartfelt piece of cartooning that is as kind as it is fearless. Easily one of the most impressive graphic novels of this year, or works of any kind in the past decade.”—Graeme McMillan, Wired

“A monumental synthesis of history, politics, and herself . . . Ducks weaves Beaton’s own experiences with warm, humane portraits of the many people she met on the oil sands . . . 55,000 square miles [that are] a controversial locus of the Canadian economy, culture, and politics, a byword for both prosperity and environmental destruction.”—Kathryn VanArendonk, Vulture

“Beaton left Nova Scotia’s Cape Breton at age 21 for an oil boom spurting a wealth of high-paying jobs that she could use to pay off her student loans. The place she finds is full of life and also hostile to it; a cabdriver warns her that a 'shadow population' of workers 'live here, but they don’t live here.' As Beaton settles into daily life in a tool shop, she begins to understand how that transience changes people, as well as her own complicity in the wholesale destruction of Indigenous land.”—Emma Alpern, Vulture

“What makes this the kind of book that you can’t stop thinking about is the empathy with which Beaton sees the world.”—Dustin Nelson, Thrillist

“Inside this dreary situation, she somehow finds humanity and even humor. It took Beaton about two years in the oil sands to pay down her loans; processing the experience took longer.”—Cat Auer, The A.V. Club

“An exceptionally beautiful book about loneliness, labor, and survival. Beaton is a thoughtful guide through a complex landscape of class and gender, and these pages ache with grief and grace.”—Carmen Maria Machado, author of In the Dream House

“A masterpiece, a heartbreak, a nightlight shining in the dark.”—Patricia Lockwood, author of No One Is Talking About This

“Ducks is both a coming-of-age narrative and a skillful, subtle commentary on class, misogyny, and the human costs of environmental extraction. From the oil fields to the hallways of worker housing, Kate Beaton’s comics are rich with quiet revelations, intimate details, and a deadpan, devastating sense of humor. A generous and illuminating book; I suspect it will stay on my mind for a very long time.”—Anna Wiener, author of Uncanny Valley

“In Ducks, Kate Beaton doesn’t tell us how capitalism extracts, exploits, commodifies, and alienates. Nor does she show us. She recreates life in an oil sands mining operation in granular detail and allows us to make the connections ourselves—as she had to when she showed up to work there at age twenty-one. The effect is devastating. Despite the brutal toll Beaton suffered personally, she has woven from her experience a vast and complex tapestry that captures the humanity of people doing a kind of 'dirty work' in which we are all complicit, and it shimmers with grace.”—Alison Bechdel, author of Fun Home

“Ducks is an unforgettable, riveting work. Kate Beaton opens the mind’s eye, allowing us to inhabit landscapes and experiences crucial to our time, yet largely unseen. Artful, considered and courageous, Ducks is a landmark work."—Madeleine Thien, author of Do Not Say We Have Nothing

“Ducks delivers an immersive, harrowing journey through an industry where the lure of fast money belies darker realities of casual brutality, profound loneliness and soul-cracking isolation. The uneasy echoes of Beaton’s story ring well past the the final page. Shattering.”—Jessica Bruder, author of Nomadland: Surviving America in the Twenty-First Century

“Katie Beaton’s graphic memoir about working in the oil sands of Alberta shares an experience that feels both alien and universal, desperate and yet somehow hopeful. Frame by frame, it weaves together a complex tale about capitalism, environmental degradation, misogyny, Indigenous rights, and the lengths that some people have to go to for a fighting chance at a good life. Honest, compassionate, and clear-eyed, Ducks is a stunning achievement in storytelling that I will be thinking about for a long time.”—Jung Yun, author of O Beautiful

“Beaton's graphic memoir of her time working in the oil patch is a vital and revelatory Canadian story, vividly told. The staggering scope of the industry and its notoriously harsh impact on the landscape of northern Alberta provide a loud, lurid backdrop. But this is fundamentally a deeply personal story, and Beaton unveils her experiences in this tough and relentlessly misogynistic work environment with a fair but unflinching eye, telling hard truths about the very mixed blessings of living and working in a boomtown.”—Chris Turner, author of The Patch: The People, Pipelines, and Politics of the Oil Sands

"This is graphic memoir at its finest."—Booklist (starred review)

"An unflinchingly honest coming-of-age memoir and unforgettable depiction of capitalism’s dehumanizing effect on the individual."—Library Journal

"A masterpiece graphic memoir [that] makes a shattering statement on the costs of ignorance and neglect endemic in the fuel industry, in both powerful discussions of its sociopolitical ramifications and her own keenly observed personal story."—Publishers Weekly (starred review)

Kate Beaton was born and raised in Cape Breton, Nova Scotia, Canada. After graduating from Mount Allison University with a degree in anthropology, she moved to Alberta in search of work that would allow her to pay down her student loans. During the years she spent out West, Beaton began creating webcomics under the name Hark! A Vagrant!, quickly drawing a substantial following around the world.

The collections of her landmark strip Hark! A Vagrant and Step Aside Pops each spent several months on the New York Times graphic novel bestseller list, as well as appearing on best of the year lists from Time, The Washington Post, Vulture, NPR Books, and winning the Eisner, Ignatz, Harvey, and Doug Wright Awards. She has also published the picture books King Baby and The Princess and the Pony.

Beaton lives in Cape Breton with her family.