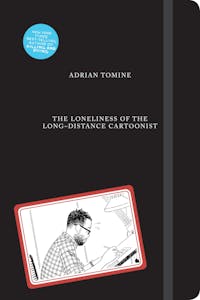 Winner of an Eisner Award

What happens when a childhood hobby grows into a lifelong career? The Loneliness of the Long-Distance Cartoonist, Adrian Tomine's funniest and most revealing foray into autobiography, offers an array of unexpected answers. When a sudden medical incident lands Tomine in the emergency room, he begins to question if it was really all worthwhile: despite the accolades and opportunities of a seemingly charmed career, it's the gaffes, humiliations, slights, and insults he's experienced (or caused) within the industry that loom largest in his memory.

Tomine illustrates the amusing absurdities of how we choose to spend our time, all the while mining his conflicted relationship with comics and comics culture. But in between chaotic book tours, disastrous interviews, and cringe-inducing interactions with other artists, life happens: he fumbles his way into marriage, parenthood, and an indisputably fulfilling existence. A richer emotional story emerges as his memories are delineated in excruciatingly hilarious detail.

In a bold stylistic departure from his award-winning Killing and Dying, he distills his art to the loose, lively essentials of cartooning, each pen stroke economically imbued with human depth. Designed as a sketchbook complete with placeholder ribbon and an elastic band, The Loneliness of the Long-Distance Cartoonist shows an acclaimed artist at the peak of his career.

"Adrian Tomine has gone from 'the boy wonder of mini-comics' (per Daniel Clowes) to master of the form . . . The 26 vignettes here trace a lifetime of neuroses and humiliations [with] artful minimalism."—Ed Park, The New York Times Book Review

"Tomine explores with the precise touch of a dentist gazing perpetually into a mouth, doing the crucial work of the quotidian. It’s lonely work, indeed, but by dwelling for so long and so thoroughly in the loneliness of his art, Tomine brings us close, terribly close, to the halitosis of being human, to the emotions we might prefer to keep at a distance."—Viet Thanh Nguyen, The Paris Review

"What Tomine is exploring is the dichotomy between how we see ourselves and how we are (or are not) seen . . . We are each alone in our heads. Yet the faith of memoir, or autofiction, is that this is what connects us: the expression of our humanity."—David Ulin, Los Angeles Times

"Tomine, now considered a master of the graphic novel form, returns in an autobiographical mode, in a book that lets vent the rage and fragility that are always just beneath the surface of his pristine drawings."—The New York Times

"An unforeseen event near the end unlocks a flood of emotion unlike anything Tomine has expressed before on paper. What starts out as playful self-deprecation becomes his most heartbreaking work to date."—The New York Times

"The Loneliness of the Long-Distance Cartoonist is another laugh-out-loud book with self-worth issues. Here Tomine looks back at his outwardly successful career as a cartoonist via anecdotes that take in deserted book signings, mortifying radio spots and the perils of taking a cruise with Neil Gaiman, in a feast of self-deprecation."—The Guardian

"The book is a catalog of decades’ worth of slights and indignations that come with being a giant in a tiny corner of the literary world, and it’s painfully funny."—Forbes

"Tomine, who is perhaps the John Cheever of comics (in the way they both excavate the human heart), shows how our lives are less tidy than that common memoir arc."—Kerri Arsenault, Literary Hub

“In this heartfelt and beautifully crafted work, Adrian Tomine presents the most honest and insightful portrait you will ever see of an industry that I can no longer bear to be associated with.”—Alan Moore, author of Jerusalem

"A wonderful book about feeling morbidly self-conscious while also longing to connect with other people, even though it doesn’t always—i.e. usually doesn't—work out the way one wants it to. It perfectly captures what it's like to be a cartoonist, and also what it's like to be a person."—Roz Chast, author of Can't We Talk About Something More Pleasant?

"A painfully honest and often hilarious view behind the curtain of the 'glamorous' life of a cartoonist. Tomine draws on life's stresses, embarrassments, and achievements as he goes through an evolution of self-awareness. A must-read for Tomine fans and all aspiring cartoonists."—Richard McGuire, author of Here

"I couldn’t put this book down. Tomine’s vulnerability and willingness to share the cringiest moments of his life (ranging from juicy to uproarious to deeply healing) are a reminder to be braver, because what have you got to lose?"—Lisa Hanawalt, author of Coyote Doggirl

"In this deeply self-aware, darkly funny memoir, Tomine recounts the highlights of his career through a series of cringe-worthy encounters, and readers hardly need to be a world-famous cartoonist to relate."—Malaka Gharib, author of I Was Their American Dream

"A hilarious, frequently cringe-inducing masterpiece from a fearless artist at the height of his powers."—Library Journal (starred review)

"This merciless memoir delivers laughter with a wince, to the point of tears."—Publishers Weekly (starred review)

Adrian Tomine was born in 1974 in Sacramento, California. He began self-publishing his comic book series Optic Nerve when he was sixteen, and in 1994 he received an offer to publish from Drawn & Quarterly. His comics have been anthologized in McSweeney’s, Best American Comics, and Best American Nonrequired Reading, and his graphic novel Shortcomings was a New York Times Notable Book. His most recent book, Killing and Dying,appeared on numerous best-of lists and was a New York Times graphic bestseller. Since 1999, Tomine has been a regular contributor to The New Yorker. He lives in Brooklyn with his wife and daughters.