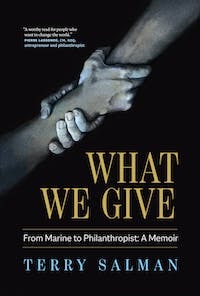 What makes a soldier? What makes a business mind? What makes a philanthropist? In this rich memoir, Canadian icon of mining finance and public service Terry Salman reflects on his remarkable life, offering inspiration and mentorship for others seeking to build their own legacies.

Salman traces his journey from his modest beginnings in Montreal as the son of a Turkish immigrant father and Quebec-born mother, to the traumas of the Vietnam War, to his rise up the Canadian business world, and the growing dedication to service that earned him the Order of Canada.

He recounts the moments that shaped him: the brotherhood of the U.S. Marines and the lifelong duty of loyalty and community they instilled in him; the traumas he endured as a young sergeant in Vietnam; his return to Canada and the mentors who helped guide his success; and his many roles in helping others.

As he climbs the corporate ladder, his deep-seated faith and commitment to social responsibility grows. He takes on leadership roles, including chairman of the Vancouver Public Library Foundation and the St. Paul’s Hospital Foundation—where he helped fund a hospice for AIDS patients—and Honorary Consul General of the Republic of Singapore.

Offering an inside view at the Canadian business, political, and philanthropic landscape, What We Give is a must-read for anyone seeking to understand how some are driven to succeed, and to give back.

“Terry Salman, a second-generation Canadian, tells a very personal story of searching for meaning . . . [and] finding purpose in random acts of kindness. A worthy read for people who want to change the world.”—Pierre Lassonde, CM, GOQ, entrepreneur and philanthropist

“What We Give reflects a life lived with love, passion, and intensity. Above all, Terry Salman’s desire to give back and support those most in need should serve as an inspiration to all. As he illustrates throughout, giving can take many forms, and often the most powerful gift is to help others meet their full potential.”—Dr. Julio S.G. Montaner, OC, OBC, Executive Director and Physician-in-Chief, BC Centre for Excellence in HIV/AIDS

“Reading Terry Salman’s words inspires reflection about how we each find our paths, the connections that build our character, and the opportunities to change people’s lives through what we give.”—Christina de Castell, Chief Librarian and CEO, Vancouver Public Library

“Terry Salman’s fascinating memoir, What We Give, starts with him modestly saying that he had the good fortune to have a good life. But more than just that, he is a good man—the man makes the life, and his life was shaped by his extraordinary experiences as a Marine who saw combat in Vietnam, as an investment banker specializing in mining, and as a philanthropist. Whether you are young or just young at heart, reading about his life will bring both pleasure and profit, in particular his wisdom on the importance of friendships, loyalty, and never giving up when the going gets tough.”—Bilahari Kausikan, former Permanent Secretary of the Ministry of Foreign Affairs of Singapore

“Terry Salman speaks of those he has supported through philanthropy with the same reverence he has for fellow Marines and Canadian business titans featured in his impressive military and civilian careers. What We Give is a must-read story about military service, personal resilience, the Canadian investment industry, and how a man drew upon all three to give back to his community.”—Oliver Thorne, Executive Director, Veterans Transition Network

“Terry Salman’s memoir serves as a poignant reflection on a life lived with purpose. Through his unique life experiences that began in Montreal and took him around the world as a dedicated Marine, a distinguished businessman, and a celebrated philanthropist, Salman’s observations on how far corporate culture and inclusion have come are thought-provoking and timely—serving as a reminder of how far society has yet to go to eliminate barriers for a more equitable future.”—Darryl White, CEO, BMO Financial Group

Terry Salman, CM, is one of Canada’s most dedicated philanthropists. Born in Montreal, he served as a sergeant with the US Marines during the Vietnam War before becoming a legend in mining finance. Terry worked with Nesbitt Thomson before leaving to form financial advisory firm Salman Partners, where he served as president, CEO, and co-director of research. Today, he is president and CEO of Salman Capital, Chair Emeritus of the Vancouver Public Library Foundation, and Honorary Consul General of the Republic of Singapore. Terry holds a BA from Chaminade University of Hawaii, an MBA from the University of Hartford, and an honorary doctorate from the B.C. Institute of Technology. He received the Order of Canada in 2020 and the Public Service Star from the Office of the President of Singapore in 2021. The father of two grown daughters, Terry lives in West Vancouver with his wife, Chris.