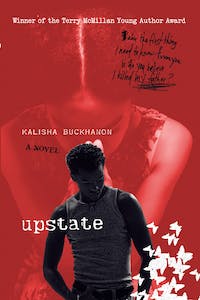 "Baby, the first thing I need to know from you is do you believe I killed my father?"

So begins Upstate, a powerful story told through letters between seventeen-year-old Antonio and his sixteen-year-old girlfriend Natasha. Set in the 1990s in New York, Antonio and Natasha's world is turned upside down, and their young love is put to the test, when Antonio finds himself in jail, accused of a shocking crime. Antonio fights to stay alive on the inside, while on the outside, Natasha faces choices that will change her life. Over the course of a decade, they share a desperate correspondence. Often, they have only each other to turn to as life takes them down separate paths and leaves them wondering if they will ever find their way back to each other.

Upstate is a well-told and unforgettable coming-of-age story with a message of undeniable hope, destined to speak to a new generation of readers.

"In prose that vibrantly captures the way real kids in Harlem speak, Buckhanon reveals not only the lovers' Romeo and Juliet-like ardor, but also their intelligence and ambition."—BookPage

"Upstate is a sensitive portrayal of young lovers that moves beyond gritty fiction. The novel's inspiring story has a message of hope that's sure to connect with readers."—Essence

"A realistic love story that's set against an urban backdrop as gritty as its characters are memorable."—People

"Upstate packs a swift punch. The language is urban, urgent, and possessing a poetry uniquely its own."—Elle

"Heartbreaking and true . . . I'd read it again just for the power of the language."—Dorothy Allison, National Book Award Finalist and author of Bastard Out of Carolina

"Wild and beautiful . . . The story is told using the epistolary form with a brilliant skill not seen since The Color Purple."—Sapphire, author of Push

"A literary gem. Upstate is a stunning debut. Completely unforgettable."—E. Lynn Harris, author of What Becomes of the Brokenhearted

"Upstate is intimate, wrenching . . . A story about love, surviving love, and the forgiveness that only love brings."—Achy Obejas, author of Memory Mambo and Days of Awe

"A gripping debut . . . I was thoroughly impressed."—Mary Monroe, author of God Still Don't Like Ugly

"Buckhanon has unleashed brilliance in this debut novel. Upstate is creative, raw, and honest."—Darnella Ford, author of Rising and Crave

"A modern love story that is real and raw in its humor and tragedy."—Zelda Lockhart, winner of the Hurston/Wright Award and author of Fifth Born

"With e-mail being used for everything from business memos and meeting reminders to tender love notes, the epistolary novel—with a history stretching from the days of Samuel Richardson and Choderlos de Laclos' Liaisons Dangereuses to, more recently, Helene Hanff's 84 Charing Cross Road and Alice Walker's Color Purple—seems to be burgeoning again. Buckhanon's foray in the format presents a decade of correspondence between Antonio, initially a teen arrested for murder, and his sweetheart, Natasha. Both from tiny, dark apartments in Harlem, they are passionately in love and lust but destined to walk very different roads. Eschewing Walker's more dialectal language, Buckhanon opts for . . . suggesting New York City black speech but not so authentically as to compromise mainstream audience potential."—Whitney Scott, Booklist

"This debut features Harlem teenagers Antonio, who has been convicted of involuntary manslaughter for killing his father, and his bright and ambitious girlfriend, Natasha. With Antonio in jail, the two maintain their intense relationship through the written correspondence that makes up the text. Antonio is angry, confused, and possessive, and Natasha gradually refuses to let him control her life, attending college and becoming a lawyer. Both funny and sad, their letters are rich with anecdotes about friends and family while detailing their own emotions and actions; as the characters mature, Buckhanon skillfully and believably changes tone. Antonio appears to be the less sympathetic character until a last-minute revelation about the killing, and his final rejection by Natasha (though he's started a new life after completing his sentence) makes the ending painful. Recommended."—Elaine Bender, El Camino College, Torrance, California, Library Journal

"Buckhanon's debut novel captures the young lovers' anger, hope and frustration. The letters are fluid, candid, and colloquial . . . a moving and uplifting story of love and hope in the face of adversity."—Publishers Weekly

Listen to this audiobook excerpt from Kalisha Buckhanon's novel Upstate, an absolutely stunning, powerful coming of age novel filled with tragedy, struggle, love and triumph—a modern The Color Purple. Set in New York in the 80's and 90's, Upstate tells the story of two young lovers, Antonio and Natasha, torn apart by tragedy and struggling to survive against all odds. When a horrific tragedy sends Antonio to jail, their worlds turn upside down.

Kalisha Buckhanon was born in Kankakee, Illinois in 1977. She has been the recipient of awards and fellowships from the NAACP, Andrew Mellon Fund, Illinois Arts Council, Illinois Young Authors Commission, Mary Roberts Rhinehart Fund and the Chicago Black Writer's Conference. Her work has appeared in such publications as Michigan Quarterly Review and Warpland: A Journal of Black Literature and Ideas. She holds an M.F.A. in Creative Writing from New School University and a B.A. in English Language and Literature from the University of Chicago. She has taught literacy and writing to children on Chicago's South Side, in Harlem, Brooklyn and the Bronx. Upstate is her first novel.