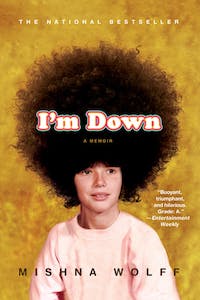 Mishna Wolff grew up in a poor black neighborhood with her single father, a white man who truly believed he was black. "He strutted around with a short perm, a Cosby-esqe sweater, gold chains and a Kangol—telling jokes like Redd Fox, and giving advice like Jesse Jackson. You couldn't tell my father he was white. Believe me, I tried," writes Wolff. And so from early childhood on, her father began his crusade to make his white daughter down.

Unfortunately, Mishna didn't quite fit in with the neighborhood kids: she couldn't dance, she couldn't sing, she couldn't double dutch and she was the worst player on her all-black basketball team. She was shy, uncool, and painfully white. And yet when she was suddenly sent to a rich white school, she found she was too "black" to fit in with her white classmates. I'm Down is a perceptive and funny memoir that will leave readers questioning what it means to be black and white in America.

"This buoyant memoir is rich in detail but never feels over embellished . . . I'm Down certainly has serious thoughts on its mind (Wolff actually grew up quite poor and hungry), but the tone manages to be light and triumphant because of the hilarious child-goggles Wolff wears while spinning her tales. Rating: A"—Entertainment Weekly

"A friend gave me a copy of the book I'm Down by Mishna Wolff. I laughed out loud from the first page on . . . A keenly perceptive, hilarious exploration of identity."—Jennifer Beals, Time Magazine

"An authentically funny, truly transcendent work that makes other, sorry-voiced memoirs by a certain more privileged class of writer pale—pun intended—by comparison . . . Wolff's focus, and the sweet soul of this terrific book, was on being accepted by her streetwise, wiseass dad, whom she knew loved her—and whom she loved—unequivocally."—Elle Magazine

"As she tells you at the outset of I'm Down, Mishna Wolff is all white—nothing remarkable, except that her way cool father, ‘Wolfy,' thinks he's black (he's not). What follows is a funny-melancholy coming of age memoir [in which] Mishna searches for identity in her broken home, her snobby, mostly white prep school, and—most restrictive of all—her longing heart."—O Magazine

"Laugh-out-loud funny. And not ‘LOL' like a text message, which often isn't literally accurate. The book is excellent entertainment, and can easily be finished in one week's worth of bus rides to work or two very long baths. It begs to be loaned to your friends."—The Seattle Times

"Wolff is a natural storyteller and very funny, which makes reading about some of the more upsetting events palatable. And instead of collapsing into stereotypes, Wolff portrays the characters in her life as fully dimensional people, who, in their wildly different ways, were doing their best to fit in."—Bust

"By turns funny and unsettling in its frank observations about race."—Good Housekeeping

"Both hilarious and heart-wrenching."—Ladies Home Journal

"If you're going to spin a tale about your impoverished, racially conflicted childhood, you might as well be funny about it . . . [And] I'm Down is full of funny incidents . . . But Wolff's affection for her family and friends—and for the prickly, clueless honky girl she once was—makes I'm Down more than just a joke."—Salon.com

"You will not be able to stop reading I'm Down once you have read the first page."—The Indie Next List

"I'm Down works on many levels, and that's mostly because Wolff is honest, sparing no expense in chronicling all the things at which she sucked. More than an awkward childhood memoir full of cultural faux pas and bust-your-gut-laughing moments, I'm Down is really a touching tribute to the author's father, John Wolff, an afro-centric white guy . . . It's when this punchy memoir unravels itself to an emotional core that it reveals the ultimate lesson—that being different isn't so bad. And by the end of this promising debut, Wolff comes out looking like roses."—Venus Zine

"Frequently hilarious, occasionally terrifying, and ultimately bittersweet . . . Wolff writes fluidly and offers moments of great insight through story rather than through explanation, making it easy for readers to engage with the child's questions and growing frustrations. An excellent choice for discussion in ethnic identity curricula, but absorbing reading, too."—School Library Journal

"Mishna Wolff was a white girl who grew up in a poor black neighborhood [while attending a rich school filled with privileged white classmates]. This funny, engaging, and perceptive memoir tells the story of how she managed to negotiate these two very different worlds, and emerge with her sanity—and identity—intact."—Tom Perrotta, author of Little Children and The Abstinence Teacher

"Told from the truly unique vantage point of a white girl in a black world, here is a really, really funny book about the slings and arrows of growing up, of being a kid, of figuring out where you belong, of figuring IT out. The royal IT. Mishna's writing is fast, hip, edgy and so funny and just when you think you've got her figured out, you don't."—Michael Showalter, comedian and actor (The State and Wet Hot American Summer)

"And you thought you had a hard time fitting in when you were growing up? Try on Mishna Wolff's bizarre childhood for size. The memoir of a honky white girl searching for belonging an urban black neighborhood, I'm Down explodes racial and cultural stereotypes with self-deprecating wit, wry humor and keen observation."—Janelle Brown, author of All We Ever Wanted Was Everything

"Immensely enjoyable, the hilarious, heartbreaking story of the honkiest honkey in the hood."—Sara Thyer, author of Dark at the Roots

"In a parallel universe—one, say, where Richard Pryor could be merged with Mark Twain and re- born with two x-chromosomes—the result would probably be Mishna Wolff. And her memoir, I have no doubt, would be as beautiful, funny, touching and irresistible as I'm Down. Wolff's real-life story is so unique—a little white girl coming of age with a family who just never considered her black enough—her eye for detail and character so nuanced, this stands out as the rare autobiography that could just easily pass for brilliant social satire."—Jerry Stahl, author of Permanent Midnight

"A wonderful memoir about identity, family, and learning to adapt. Maybe Mishna Wolff never developed the sense of rhythm her dad hoped she'd have, but she gained a terrific sense of humor. I'm Down is hilarious, bittersweet, and full of soul (in every sense of the word)."—Wendy McClure, author of I'm Not The New Me

"Deftly and hilariously delineates the American drama of race and class for one little girl."—Kirkus Reviews

Mishna Wolff reads an excerpt from her memoir, I'm Down.

Mishna Wolff was one of the 2009 Sundance Screenwriting Lab fellows. She is a humorist and former model, who grew up in Seattle. She lives and writes in New York City.