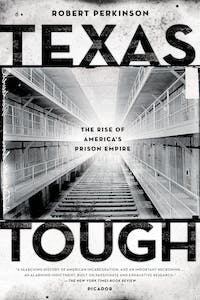 Winner of the 2011 PEN / John Kenneth Galbraith Award for Nonfiction

A pioneer in criminal justice severity—practicing mandatory sentencing, prison privatization, supermax isolation, and assembly executions—Texas is the most locked-down state in the most incarcerated nation in the world.Texas Tough, a history of American imprisonment from the days of slavery to the present, shows how a plantation-based penal system once dismissed as barbaric became the national template.

Drawing on archival research of official records and interviews with prisoners, guards, and lawmakers, historian Robert Perkinson reveals the Southern roots of America's present-day prison state. He traces the development of two modes of criminal discipline, the North's rehabilitative approach and the South's emphasis on retribution and profit, and shows how an unforgiving, racially divisive model ultimately triumphed. Most provocatively, he argues that just as Jim Crow, lynching, convict leasing and segregation emerged in response to emancipation and Reconstruction, so today's mass incarceration, with its persistent injustice, political demagoguery, and vast racial disparities, must be seen as a backlash against desegregation and civil rights.

Illuminating for the first time the origins of America's prison colossus, Texas Tough makes clear why the world's oldest republic has built the most expansive prison system in the history of democratic governance and why racial disparities in criminal justice have worsened over the past forty years, despite social and legal breakthroughs toward civil rights and equality. Yet, by addressing forgotten alternatives to this vengeful approach to lawbreaking at a time when budget shortfalls and a changing political climate have made reform possible for the first time in a generation, Texas Tough points toward a more just and humane future.

"A searching history of American incarceration, and an important reckoning with our societal responsibility . . . An alarming indictment, built on passionate and exhaustive research."—The New York Times Book Review

"Texas Tough is a raw, compelling assessment of racial disparity and southern culture as they have determined the massive over-incarceration of African Americans. If you want to understand how politics, not crime control, governs today's prison population, read this book. Anyone concerned with justice and fairness should place this on their must-read list."—Charles J. Ogletree Jr., Jesse Climenko Professor of Law, Harvard Law School, and author of When Law Fails

"This book is a Texas Death Match between David (Robert Perkinson) and Goliath (the American prison system). Goliath is armed, violent, massive, and hard to bring down, but David has a sling and a book full of smooth stones taken from the brook of history."—Marcus Rediker, author of The Slave Ship: A Human History

"Texas Tough is a powerful study of the Texas prison system, its profit-driven administration, its history and its critical impact on the U.S. national prison system. Based on superb research that traces the racial assumptions of today's criminal system to the ideas of race developed during American slavery, Texas Tough is a gracefully written work of wide-ranging, impressive historical knowledge."—James Oliver Horton, author of Landmarks of African American History

"A brilliant and riveting account of the nation's most important prison system. Perkinson describes its growth with extraordinary care given to the daily lives of the inmates, the institutional structures, and the philosophy of punishment (including the death penalty) that seem immune to innovation and reform. Texas provides a perfect lens to study America's exploding prison problems today, and Perkinson in an ideal guide. As both an original history of punishment and a critique of current issues of race, violence, and incarceration, Texas Tough is in a class by itself."—David Oshinsky, author of Worse Than Slavery: Parchman Farm and the Ordeal of Jim Crow Justice

"The United States maintains the largest penal system in the world. With his powerful story of the prisons of Texas, Robert Perkinson shows how we came to this desperate condition. It is a story we all need to understand and there is no better place to comprehend the origins and evolution of this national tragedy.—Edward Ayers, author of The Promise of the New South

"Texas Tough is a gripping work of history, but its most important lesson is about the country we live in today. We cannot fulfill America's promise of liberty and justice until we address the crisis of mass incarceration. Every social justice advocate and policy maker in the nation needs to read this book."—Ann Beeson, Executive Director, Open Society Institute

"Texas Tough is the most important history of crime and punishment in America since David Rothman's The Discovery of the Asylum. It will transform our understanding of not only crime and punishment but also the nature of historical change in the United States, which is not driven, as we believe, by progress or even the idea of progress, but by regress. Robert Perkinson shows us that the past continuously structures and constrains every effort to re-imagine and reform the present. This is no small achievement."—Corey Robin, author of Fear: The History of a Political Idea

"Texas Tough shows that the politics of race has always governed the politics of punishment and explains why our criminal justice system is the frontline of America's human rights struggle in the twenty-first century. This book is a must-read for anyone who wants to build a stronger America and put these decades of over-incarceration (and under-education) of Americans behind us."—Benjamin Todd Jealous, President, NAACP

"An intensively researched, disturbing history of American penology… A convincing and discouraging argument that the Texas model of a profit-making, retributive prison system has become the national template."—Kirkus Reviews

"Sheds light on the evolution of penal systems across the country . . . A fascinating and often deeply troubling book."—Booklist

If we are to fully understand the causes and consequences of America's prison buildup, a good place...

Robert Perkinson is a professor of American studies at the University of Hawai'i at Manoa. He lives in Honolulu, Hawai'i.