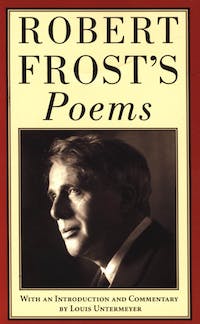 This handy and affordable collection, a longtime bestseller, contains all of Frost's best-known poems—and many others. Here are "Birches," "Mending Wall," "Stopping by Woods on a Snowy Evening," "Two Tramps at Mud Time," "Choose Something Like a Star," and "The Gift Outright" (which Frost read at the inauguration of JFK).

The volume contains over 100 poems, with ample selections from every phase of Frost's long and varied career. Robert Frost's Poems grants us an informed celebration of New England's countryside, an appreciation of common people (especially their grace, candor, and wisdom), an ongoing encounter with life's predicaments and truths, and a rich self-portrait of the great American poet who "had a lover's quarrel with the world."

"Frost has bequeathed to his nation a body of imperishable verse from which Americans will forever gain joy and understanding."—John F. Kennedy

"Frost was the first American poet who could honestly be reckoned a master-poet by world standards."—Robert Graves

"Frost [is among] the greatest of the American poets of the 20th century."—Randall Jarrell

"No other American poet has so much art or so much subject matter."—Mark Van Doren

"Of all the poetry written in our generation, Frost's is most likely to stand the test of time."—Lewis Gannett

Robert Frost; With an Introduction and Commentary by Louis Untermeyer

Robert Frost (1874-1963) is widely regarded as one of America's finest poets. He was awarded the Pulitzer Prize for Poetry on four different occasions, and also served as Consultant in Poetry at the Library of Congress.