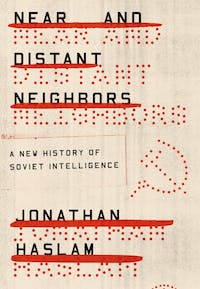 Previous histories have focused on the KGB, leaving military intelligence and the special service—which specialized in codes and ciphers—lurking in the shadows. Drawing on previously neglected Russian sources, Haslam reveals how both were in fact crucial to the survival of the Soviet state. This was especially true after Stalin's death in 1953, as the Cold War heated up and dedicated Communist agents the regime had relied upon—Klaus Fuchs, the Rosenbergs, Donald Maclean—were betrayed. In the wake of these failures, Khrushchev and his successors discarded ideological recruitment in favor of blackmail and bribery. The tactical turn was so successful that we can draw only one conclusion: the West ultimately triumphed despite, not because of, the espionage war.

In bringing to light the obscure inhabitants of an undercover intelligence world, Haslam offers a surprising and unprecedented portrayal of Soviet success that is not only fascinating but also essential to understanding Vladimir Putin's power today.

"A detailed appraisal of how the Soviet Union handled undercover operations from the communist revolution in 1917 until the end of the cold war. The most gripping chapters focus on the chaos that was unleashed by Josef Stalin."—The Economist (Books of the Year 2015)

"Haslam takes seriously the task of tracing the history of Soviet espionage, to the extent that old and new sources allow. He acknowledges the significant obstacles that stand in the way, but his book fills in some large gaps. It covers the Soviets’ often bumbling early intelligence efforts in the years immediately following the 1917 Russian Revolution, as well as the increasingly professionalized operations of the 1920s and 1930s, when the Soviets 'turned' Western leftists to the cause until Western intelligence agencies caught on and began dismantling the Soviet network after World War II. He reveals a striking divide between the 1930s and the post-Stalin years: in the earlier era, Westerners who allowed themselves to be recruited to the Soviet side were often idealistic; in the later years, such recruits were more frequently merely venal."—Robert Legvold, Foreign Affairs

"The author writes authoritatively, deftly managing his labyrinth of ruthless personalities . . . A well-executed narrative of the mechanics behind the Cold War that may be a bit too dense and/or dry for casual readers."—Kirkus Reviews

The Secret Intelligence Service has existed for 150 years.* We, for 10. That is their advantage. But we have our advantages: a clear goal, our incorruptibility, sense of purpose; but above all, devotion to the...

The extraordinary achievements of Yuri Totrov

Author Jonathan Haslam talks about Yuri Totrov who devised an intricate system based on common sense on how to identify American and probably also British agents and officers.

Jonathan Haslam is the Professor of the History of International Relations at Cambridge University; a Fellow of Corpus Christi College, Cambridge; and a Fellow of the British Academy. He was a visiting professor at Harvard, Yale, and Stanford, and is a member of the society of scholars at the Johns Hopkins University. His previous work includes Russia's Cold War: From the October Revolution to the Fall of the Wall, No Virtue Like Necessity: Realist Thought in International Relations Since Machiavelli, The Vices of Integrity: E. H. Carr, 1892-1982, and several histories of Soviet foreign policy in the 1930s.