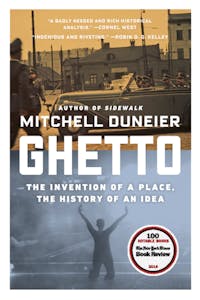 On March 29, 1516, the city council of Venice issued a decree forcing Jews to live in a closed quarter, il geto—named for the copper foundry that once occupied the area. The term stuck, and soon began its long and consequential history.

In this sweeping account, Mitchell Duneier traces the idea of the ghetto from its beginnings in the sixteenth century and its revival by the Nazis to the present day. We meet pioneering black thinkers such as Horace Cayton, a graduate student whose work on the South Side of Chicago established a new paradigm for thinking about Northern racism and black poverty in the 1940s. We learn how the psychologist Kenneth Clark subsequently linked the slum conditions in Harlem with black powerlessness in the civil rights era, and we follow the controversy over Daniel Patrick Moynihan’s report on the black family. We see how the sociologist William Julius Wilson refocused the debate on urban America as the country retreated from racially specific remedies, and how the education reformer Geoffrey Canada sought to transform the lives of inner-city children in the ghetto.

By expertly resurrecting the history of the ghetto from Venice to the present, Duneier’s Ghetto provides a remarkable new understanding of an age-old concept. He concludes that if we are to understand today’s ghettos, the Jewish and black ghettos of the past should not be forgotten.

"Stunningly detailed and timely . . . In Duneier's impressive and comprehensive volume, readers will find a greater sense of the complexity of America's problem of racial inequality, as well as the urgency—practical and moral—of solving it."—Khalil Gibran Muhammad, The New York Times Book Review

"Brilliant . . . [Duneier's] concerns are born from profound sociological and historical understanding. His book is an incisive, balanced yet commendably biting account of the unfinished history of the ghetto."—Jerry Brotton, The Wall Street Journal

"[Ghetto is] a history of the concept which also serves as an argument for its continued usefulness. Duneier is a sociologist, too, sensitive to the sting of 'ghetto' as an insult. But for him that sting shows us just how much inequality we still tolerate, even as attitudes have changed . . . Duneier’s book makes it easy to see how, through all these changes, black ghettos in America have remained the central point of reference for anyone who wants to understand poverty and segregation."—Kelefa Sanneh, The New Yorker

"A searing and searching examination of the political and cultural history at the root of this powerfully evocative and inflammatory term."—David M. Shribman, The Boston Globe

"As [Duneier's] fine book demonstrates, the meaning of 'ghetto' has changed over time, responding to political circumstances . . . His rich intellectual history of the ghetto raises important questions about how we might address the plight of its residents."—Aram Goudsouzian, The Washington Post

"The rise of economic inequality has become a staple of policy debates and stump speeches. Less visible is the way the rise has altered the landscape of America’s urban neighborhoods . . . [Ghetto] should help change that."—Patrick Sharkey, The Atlantic

"Beautifully written . . . [Duneier] is our most acute observer of [the ghetto's] history."—Mario L. Small, The Chronicle of Higher Education

"An arresting, listen-up synthesis of ghetto-living theory and practice over its 500-year history; particular emphasis is paid to the last century, when ghettos shape-shifted with alarming speed. You emerge with an oh-so-better understanding of the forces that fashioned the ghetto."—Peter Lewis, The Christian Science Monitor

"Duneier considers the ghetto to be a useful sociological concept . . . and has worked hard to bring us its abundant history . . . Using new and forgotten sources, Duneier’s book is a valuable examination of black ghettos in America from 1944 to the present."—Dusty Sklar, Jewish Currents

"There are no magic solutions in Ghetto, but the book makes it clear that any attempt to undo the disenfranchisement of the ghetto will have to wrestle with the restrictions based on race, income and wealth that built its walls in the first place."—Naomi Gordon-Loebl, The Washington Spectator

"Mitchell Duneier's Ghetto is a badly needed and rich historical analysis. In his subtle treatment of towering figures such as Horace Cayton, Kenneth Clark, William Julius Wilson, and Geoffrey Canada, Duneier helps us discern the insights and blindnesses of policies that seek to empower poor people."—Cornel West

"One of America's preeminent ethnographers, renowned for his exquisite close-focus portraits of the deprived in our cities, now zooms out to wide-angle intellectual history. Tracing the concept of 'the ghetto' from its tangled roots in early modern Italy to its genocidal implementation by the Nazis in Warsaw and its contemporary embodiment in poverty-stricken, subjugated American central cities, Mitchell Duneier offers subtle, unexpected insights into the contours and consequences of race-based residential segregation."—Robert D. Putnam, author of Bowling Alone and Our Kids

"In Poland in 1949, W.E.B. Du Bois recognized the 'Negro problem' in the former Warsaw ghetto, drawing a parallel Mitchell Duneier explores with discernment. Focused on particular thinkers in particular times, Ghettoreveals how social science actually operates. The result: a brilliant combination of breadth and sharpness, of thought-provoking questions and clear-sighted answers, of Jews and blacks in cities across the Western world."—Nell Irvin Painter, author of The History of White People

"In this ingenious and riveting book, Mitchell Duneier reveals that social scientists were as important as structural racism, urban policy, and economic forces in creating what we’ve come to know as the modern ghetto. The story of the ghetto's invention is chock-full of misinterpretations, intrigues, and analytical breakthroughs. Revisiting the often elusive relationships between the medieval Jewish ghetto, the Nazi-created ghetto, and the open-air prisons we call the black ghetto, Duneier turns prevailing wisdom on its head, warning us that what we think of as 'ghetto fabulous' may, in fact, be fabulations."—Robin D. G. Kelley, author ofFreedom Dreams: The Black Radical Imagination

"Mitchell Duneier's book on the ghetto explores both the place and the thinking it has inspired. He tells the story of a reality that will not go away. His writing is never superficial, always clear, and sometimes deeply moving. To understand the American city, you need to read this book."—Richard Sennett, author of The Craftsman and The Fall of Public Man

"Mitchell Duneier's book should be read by anyone who wants to understand the history of the ghetto and how our thinking about race has developed. For many, it will be the equivalent of Robert Heilbroner's The Worldly Philosophers, which introduced readers to the history of economic thought—it displays a similar gift for narrative, appraisal, and analysis. In light of recent events in Ferguson, Baltimore, and elsewhere, and the emergence of the Black Lives Matter movement, this book could not be more timely."—Paul Starr, author ofThe Social Transformation of American Medicine

"A magisterial recovery of a repudiated concept that brings much needed historical awareness to the idea and the reality."—Barbara Kirshenblatt-Gimblett, Chief Curator, Core Exhibition, POLIN Museum of the History of Polish Jews, Warsaw

"A wholly new perspective on the ghetto."—Kenneth Stow, author of Theater of Acculturation: The Roman Ghetto in the Sixteenth Century

"A major work of original historical research and contextualization that is destined to become a classic."—Benjamin C. I. Ravid, Jennie and Mayer Weisman Professor Emeritus of Jewish History, Brandeis University

"A brilliant if sobering exploration of how the mental architecture of stigma and confinement has imposed itself."—Patricia J. Williams, James L. Dohr Professor of Law, Columbia Law School

"A careful and wide-ranging intellectual history of the ghetto. We need this book."—Jonathan Holloway, Dean of Yale College

"Noted sociologist Duneier uncovers the intellectual and sociological history of how the word ["ghetto"] evolved . . . The narrative moves seamlessly from the 1940s through 2004, with plenty of history and future thinking peppered in-between . . . [Ghetto] is timely and important."—Rebecca Vnuk, Booklist

"Duneier's intellectual biographies sparkle with revealing details . . . Duneier offers one of the best—and certainly the most readable—accounts of the transformation of American sociological thinking on race. Like the most accomplished intellectual biographers, he situates his subjects in fierce debate with their contemporaries and with each other . . . [Ghetto] is a provocative and often brilliant history of urban sociology and public policy."—Thomas J. Sugrue, Bookforum

"In his timely history of the black American ghetto and the thinkers who theorized and defined it, Princeton sociologist Duneier resuscitates the 'forgotten ghetto' and the various ways it was understood . . . [a] far-reaching and incisive study."—Publishers Weekly (starred review)

While W.E.B. Du Bois was studying philosophy at the University of Berlin in the final decade of the nineteenth century, he believed—as do many Americans...

Mitchell Duneier is the Maurice P. During Professor of Sociology at Princeton University and the author of the award-winning urban ethnographies Slim’s Table and Sidewalk.