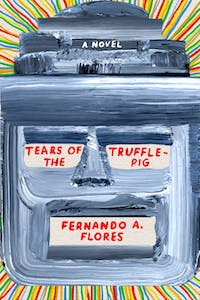 A parallel universe. South Texas. A third border wall might be erected between the United States and Mexico, narcotics are legal and there’s a new contraband on the market: filtered animals—species of animals brought back from extinction to amuse the very wealthy.

Esteban Bellacosa has lived in the border town of MacArthur long enough to know to keep quiet and avoid the dangerous syndicates who make their money through trafficking. But his simple life gets complicated after a swashbuckling journalist invites him to an underground dinner at which filtered animals are served. Bellacosa soon finds himself in the middle of an increasingly perilous and surreal journey, in the course of which he encounters legends of the long-disappeared Aranaña Indian tribe and their object of worship: the mysterious Trufflepig, said to possess strange powers.

Written with infectious verve, bold imagination, and oddball humor, Fernando A. Flores’s Tears of the Trufflepig is an absurdist take on life along the border, an ode to the myths of Mexican culture, and an introduction to a staggeringly smart new voice in American fiction.

"At its heart, the novel may be a border story, but it’s a bizarre, macabre, and wryly funny one that doesn’t need to do much to damn those who would look at the border and presume to understand it."—Joshua Rivera, The Nation

"A bizarre fever dream of a book made all the more frightening by its eerie plausibility . . . Flores never overplays his hand. Throughout the book, he grounds his vision of the future in enough realism that even the strangest parts of the story come across as plausible . . . Debut novels can be shaky affairs, but Flores writes like a seasoned veteran—his structure and pacing are perfect. And he proves to be an expert at tone. The novel has a hard-boiled noir vibe, but Flores never indulges in the genre’s clichés. Tears of the Trufflepig is a beautifully crafted novel that asks serious questions but doesn’t lose its heart."—Michael Schaub, Texas Observer

"An exhilarating borderland dystopia . . . headlong and inventive . . . [Flores] capture[s] half-real, half-intuitive, entirely original impressions of a contemporary border region as a place where, increasingly, nature is walled in, authority is tied to spectacular cruelty, and both corruption and everyday resistance to it flourish."—Michael Agresta, Texas Monthly

"[Tears of the Trufflepig] blend[s] noir with with magical realism . . . Bellacosa is good company for the reader, refreshingly gentle and loving in a fictional and real-life terrain scarred by abysses of cruelty and greed, where kindness is distrusted or dismissed as boring and naive . . . The key is just to go along for the ride. And why not? It’s what Bellacosa does. His quest may be meandering and bizarre, nightmarish and heart-rending, but the journey is well worth taking."—Jean Huets, Ploughshares

"A trippy debut novel set in a dystopian near-future South Texas . . . Flores expertly lampoons the narcotraficante predilection for exotic collecting and baroque violence . . . The novel delivers where it counts."—Harper's Magazine

"Move over, chupacabra—there’s a new mythical Southwestern beast in town: the trufflepig, a creature worshipped by a lost Aranana Indian tribe in this exuberant novel set on a trippier version of the American border."—The Millions

"One of the most thrilling debut novels in recent history. Tears of the Trufflepig is funny and thrilling and tragic."—Los Angeles Review of Books


Bellacosa walked carefully over the rotting planks, unsure if this was the shack where he was born. Its roof was missing, and he looked up at the aluminum sky. It hadn’t caved in, so he figured some South Texas zephyr galloped away...

Fernando A. Flores was born in Reynosa, Tamaulipas, Mexico, and grew up in South Texas.