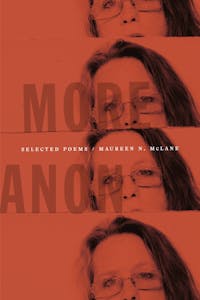 McLane, whose collection This Blue was a finalist for the National Book Award, is a poet of wit and play, of romanticism and intellect, of song and polemic. More Anon presents her work anew. The poems spark with life, and the concentrated selection showcases her energy and style.

As Parul Seghal wrote in Bookforum, “To read McLane is to be reminded that the brain may be an organ, but the mind is a muscle. Hers is a roving, amphibious intelligence; she’s at home in the essay and the fragment, the polemic and the elegy.” In More Anon, McLane—a poet, scholar, and prizewinning critic—displays the full range of her vertiginous mind and daring experimentation.

"Poet and critic James Longenbach has described a certain kind of poem that 'makes us hear [it] as an ongoing act of thinking, a bringing forth.' Maureen McLane’s poems achieve this bringing-forth, showing the mind (and the body, since for McLane the two can’t be separated) as 'an irresistible humming vibrating' thing, 'all present-tense,' 'a congeries / of possibles' . . . [McLane's] poems are learned but they’re also fun, sometimes goofy, and they’re always moving, moving, moving."—Anthony Domestico, Commonweal

"Reprinting around a third of her previously published poetry, More Anon may be 'rigorously pruned,' but its contents are so various, no mere bouquet but a botanical garden, that you might reasonably wonder how it all came from just one poet."—Christopher Spaide, The Sewanee Review

"More Anon dazzles for the fineness of McLane’s formal precision, her searching intellectualism, and her commitment to ethical questioning and growth. She theorizes her sense of identity as ongoing, as never not emergent, as the shifting sum of a set of possible performances. 'There are many questions I have been brought to pose to myself,' she writes in a recent essay on contemporary poetics."—Gillian White, Poetry

"McLane's poems are about as social and intelligent as they come . . . McLane has already gathered her sticks, now she sharpens them. This proves a conclusive asset; there is nothing like her in American poetry."—Spencer Hupp, The Cortland Review

"This collection shines with a wonderful mix of irreverence and profundity."—Publishers Weekly

Maureen N. McLane is the author of several previous books of poetry, including Some Say; Mz N: the serial: A Poem-in-Episodes; and the 2014 National Book Award finalist This Blue. Her book My Poets, a hybrid of memoir and criticism, was a finalist for the 2012 National Book Critics Circle Award for autobiography.