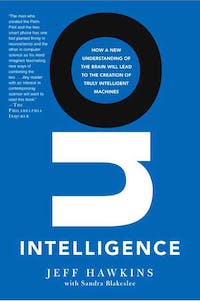 Jeff Hawkins, who created the PalmPilot, the Treo smart phone, and other handheld devices, here presents a brilliant book that stands ready to revolutionize both neuroscience and computing in one stroke. Indeed, On Intelligence develops a powerful theory of how the human brain works, explaining why computers are not intelligent and how, based on this new theory, we can finally build intelligent machines. Previous attempts at replicating human intelligence—through artificial intelligence and neural networks—have not succeeded. Their mistake, Hawkins argues, was in trying to emulate human behavior without first understanding what intelligence is.

The brain is not a computer, supplying by rote an output for each input it receives. Instead, this book argues that the brain is a memory system that stores experiences in a way reflective of the true structure of the world, remembering sequences of events and their nested relationships and making predictions based on those memories. It is this memory-prediction system that forms the basis of intelligence, perception, creativity, and even consciousness. Intelligence, then, is the capacity of the brain to predict the future by analogy to the past.

In an engaging style that will captivate, stimulate, and speak clearly to all, On Intelligence explains what intelligence is, how the brain works, and how this knowledge will finally make it possible for us to build intelligent machines, in silicon, which will not simply imitate but exceed our human ability in surprising ways. This groundbreaking study will be a must for today's students and scholars of neuroscience, psychology, computing, and AI.

"The man who created the PalmPilot and the Treo smart phone has one foot planted firmly in neuroscience and the other in computer science as his mind imagines fascinating new ways of combining the two."—The Philadelphia Inquirer

"If Hawkins is right, his work will have practical implications far greater than anything he has invented so far."—Fortune

"Elegantly written . . . This book provides some provocative thoughts on how the brain and the mind may actually function."—Richard Lipkin, Scientific American

"Clear and punchy . . . With so many books published recently on minds, machines, and intelligence, it is becoming progressively more difficult to find their distinguishing features. Happily, Jeff Hawkins has a unique perspective, as one of the pioneers of hand-held electronic organizers and founder of the Palm Computing and Handspring companies . . . His hard-nosed grasp of complex digital-system design and his passion for neuroscience are the authoritative bases for this book . . . Hawkins makes an appealing case for the sort of computational analysis that is likely both to clarify how the brain works and to give artificial-intelligence systems a new grounding."—Igor Aleksander, emeritus professor of neural systems engineering at Imperial College London, Nature

"[This book] takes a detailed look at how the human brain works, compares this to how AI currently works, and concludes that our machines will never get there from here . . . Hawkins and Blakeslee make a terrific team that has produced a stellar book . . . [The authors] do an outstanding job of explaining the organizational architecture of the neocortex and the intricate way in which its six layers of cells are connected to one another, as well as to other cells in the brain. Through a series of vivid, easy-to-understand examples, they show why our brains may be data-processing tortoises compared with computer hares, but human intelligence can easily cross the finish lines that today's AI can't even find . . . I've read dozens of books about the human brain and how it works. On Intelligence, with its chatty style and cross-references to the computer technology so ubiquitous in our lives today, is far and away the best."—Lynn Yarris, The San Jose Mercury News

"On Intelligence will have a big impact; everyone should read it. In the same way that Erwin Schrödinger's 1943 classic What Is Life? made how molecules store genetic information the big problem for biology at that time, On Intelligence lays out the framework for understanding the brain."—James D. Watson, chancellor, Cold Spring Harbor Laboratory, and the 1962 Nobel laureate in physiology

"A landmark book. On Intelligence is the first clear exposition of what could be the long-awaited 'great general theory' of human brain function. Loaded with intelligence, insight, and wisdom, it's a wonderfully readable account of the fundamental principles of the brain by a great American original."—Mike Merzenich, professor of neuroscience, University of California, San Francisco

"Brilliant and embued with startling clarity. On Intelligence is the most important book in neuroscience, psychology, and artificial intelligence in a generation."—Malcolm Young, professor of biology and provost, University of Newcastle

"Read this book. Burn all the others. It is original, inventive, and thoughtful, from one of the world's foremost thinkers. Hawkins will change the way the world thinks about intelligence and the prospect of intelligent machines."—John Doerr, partner, Kleiner Perkins Caufield & Byers

"Hawkins has written an original, thought-provoking, and, with the help of Sandra Blakeslee, remarkably readable book that presents a new theory of the functions of the cerebral cortex in perception, cognition, action, and intelligence. What is distinctive about his theory is the original way existing ideas about the cerebral cortex and its architecture have been combined and elaborated based on an extensive knowledge of how the brain works—what Hawkins calls Real Intelligence in contrast to computer-based Artificial Intelligence. As a result this book is a must-read for everyone who is curious about the brain or who wonders how it works. Many sections of this book, especially those on intelligence, creativity, and minds of silicon, are so thoughtful and original that they are likely to be required reading for college undergraduates for years to come."—Eric R. Kandel, professor, Columbia University, senior investigator, Howard Hughes Medical Institute, and 2000 Nobel laureate in medicine

"A remarkable synthesis of ideas. I predict it will have a major impact on neuroscience and neuroscientists."—Mriganka Sur, professor of neuroscience, department head of brain and cognitive sciences, Massachusetts Institute of Technology

"On Intelligence is a brilliantly presented and innovative hypothesis of how the brain works. Hawkins makes a convincing case that human perception is based upon expectations . . . that our minds predict what we will experience before we experience it, based on our memory of similar circumstances. We then pay attention to the differences . . . the sensory experiences that are not part of our expectations. Hawkins also proposes an innovative and credible mechanism for how this anticipatory thinking is implemented by the brain's circuitry, including a guide to what the experimental proof will look like. The theory provides insight as to why eyewitnesses to the same event will often differ in their recollection of what they saw, based on their different life experiences. It also gives a logical reason for human prejudice and why people get addicted to gambling. I believe the book will have a great impact on neuroscience and lays a foundation for improving human communication, mutual understanding, and education."—Patrick McGovern, founder and chairman, International Data Group (IDG), and chairman, McGovern Institute for Brain Research, Massachusetts Institute of Technology

"Hawkins, the PalmPilot's inventor, is keen to build truly intelligent machines based on his ideas of how the brain really works. The brain is no computer, this guru of handheld devices makes clear. The AI folks have got it wrong, even with their neural networks and feedback devices. The brain is not a super-fast PC computing all the moves so as to beat you at chess. It's slow, but oh-so-clever. It can fill in the quote when you supply it with a few words, read your crummy handwriting, hum the tune given a couple of notes. All this is possible, Hawkins says, because of the hierarchical structure of the neocortex covering the brain. The cortex is composed of six layers of cells that connect up and down in columns, sideways to cells in other columns, and also connect to other parts of the brain. Incoming signals, say from the eye, send a constantly changing barrage of signals to cells in the visual cortex that, through a succession of relays up and down, get transformed into invariant patterns (a face, for example). Memory, in Hawkins's theory, is a neocortical function based on extracting invariant features of spatial (or temporal) sequences of patterns and employing a process of 'autoassociation' in which pattern one invokes an associated pattern two, etc. Hawkins provides many a homely example to comfort the reader traversing the neuroanatomical details, culminating in what he calls the memory-prediction concept of intelligence, in which we use memory to make analogies that allow us to anticipate what happens next, even to devise creative moves. The strength here lies in the solid work of neuroscientists under-girding Hawkins's ideas . . . Ever the optimist, Hawkins considers building intelligent machines eminently doable."—Kirkus Reviews

From On Intelligence:
Let me show why computing is not intelligence. Consider the task of catching a ball. Someone throws a ball to you, you see it traveling towards you, and in less than a second you snatch it out of the air. This doesn't...

Jeff Hawkins is one of the most successful and highly regarded computer architects and entrepreneurs in Silicon Valley. He founded Palm Computing and Handspring, and created the Redwood Neuroscience Institute to promote research on memory and cognition. Also a member of the scientific board of Cold Spring Harbor Laboratories, he lives in northern California.

Sandra Blakeslee has been writing about science and medicine for The New York Times for more than thirty years and is the co-author of Phantoms in the Brain by V. S. Ramachandran and of Judith Wallerstein's bestselling books on psychology and marriage. She lives in Santa Fe, New Mexico.