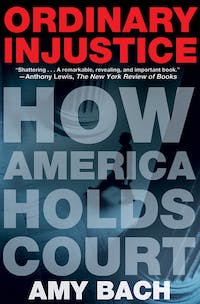 Attorney and journalist Amy Bach spent eight years investigating the widespread courtroom failures that each day upend lives across America. There, she observed professionals working in the system who, however well intentioned, cannot see the harm they are doing to the people they serve. There is a public defender pleads most of his clients guilty with scant knowledge about their circumstances; a judge who sets outrageous bail for negligible crimes; a prosecutor who habitually declines to pursue significant cases; a court that works together to achieve a wrongful conviction.

In an inquiry that moves from small-town Georgia to upstate New York, from Mississippi to Chicago, Ordinary Injustice shows the consequences that result when communities mistake the rules that lawyers play by for the rule of law. Amy Bach goes beyond the usual explanations of bad apples and meager funding to reveal a clubby legal culture of compromise. She exposes an assembly-line approach to justice that rewards mediocre advocacy, bypasses due process, and shortchanges both defendants and victims to keep the court calendar moving. It is time, Bach argues, to institute a new method of checks and balances that will make injustice visible—the first and necessary step to reform.

With human stories, sharp analysis, and a sense of urgency, Ordinary Injustice is a major reassessment of the health of the nation's courtrooms.

"Bach has done something different: shown us the reality of the criminal justice process in microscopic, human detail. In different places across the country she watched went on in courtrooms. Her accounts of what she saw should open others' eyes to unwelcome reality. It is a revealing and important book."—Anthony Lewis, The New York Review of Books

"Bach, a writer and attorney, has found a powerful and frightening story in the day-to-day workings of the justice system and, in particular, how it fails to live up to its ideals—‘the routine injustice,' she writes, ‘happening in courtrooms across the country' . . . Ordinary Injustice tells stories that too often are overlooked by mainstream media, probably because they are not as dramatic as, say, a wrongful conviction. But in each injustice Bach reveals, with the poignant details that come only from long hours spent sitting on hard courtroom benches and knocking on doors, the seeds of larger, more dramatic injustices . . . Ordinary Injustice looks at a part of the criminal justice system that largely goes unexamined—relatively minor cases where seemingly little is at stake. What it finds is deeply troubling."—Steve Mills, Chicago Tribune

"One of the most powerful and important books on the law published in 2009."—Tony Mauro, The National Law Journal

"Should be required reading for every judge, prosecutor, defense lawyer, clerk and defendant in courthouses everywhere."—Milwaukee Journal Sentinel

"One of the best portrayals I've read of the everyday, mundane, and yet utterly paralyzing weaknesses of state criminal justice systems . . . Sobering, and important."—Emily Bazelon, Slate.com

"A highly readable and balanced look at a variety of criminal justice problems in America's courts . . . With compassion and an open mind, bach has created a work capable of broadening even the sophisticated lawyer-reader's perspective on where injustice is found."—Alyson Palmer, Fulton County Daily Report (Atlanta)

"It takes an attorney to investigate state county courtrooms, and Ordinary Injustice reveals the sorry condition of certain state county courtrooms. Amy Bach is a hero to the faceless numbers who have stood before them, alone, convicted, without the guaranteed benefit of a zealous defense."—Mandy Twaddell, The Providence Journal

"More than anything else I have read, Ordinary Injustice tells us what actually happens in the prosecutorial world. That reality is painfully different from the romantic picture of constitutional rights triumphant that I helped to paint in Gideon's Trumpet. It is a fascinating and essential book."—Anthony Lewis, author of Freedom of the Thought That We Hate: A Biography of the First Amendment

"Ordinary Injustice takes the reader to unexamined fiefdoms across the country and brings them deep into the heart of the way justice truly happens on a day-to-day level. It shows how dangerous it is when any one of the clearly defined roles in the system malfunctions. No one concerned with the state of this country's democracy can afford to ignore this necessary book."—Barry Scheck, co-founder and co-director of The Innocence Project, Benjamin N. Cardozo School of Law

"Amy Bach sets out to uncover and, more important, explain widespread failures of the legal process. That she achieves this is reason enough to read and respect Ordinary Injustice. But she does it in a way that turns a necessary study into a hard-to-put down narrative that sometimes reads like a screenplay. Best of all, Bach exudes understanding, even empathy, for those bad actors whom she rightly concludes shouldn't be blamed alone—because, as she writes, ‘pinning the problem on any one bad apple fails to indict the tree from which it fell.'"—Steven Brill, founder of Court TV and The American Lawyer

"This is a magnificent work, a crusading call for reform in the tradition of Rachel Carson's Silent Spring or Ralph Nader's Unsafe at Any Speed. With her remarkable skills as a reporter and her masterful storytelling ability, Amy Bach provides a fascinating range of individual stories to reveal the systemic, everyday problems in our courts that must be addressed if justice is truly to be served. This groundbreaking book deserves widespread attention."—Doris Kearns Goodwin, author of Team of Rivals

"This is a very important book for any one seriously concerned about the continuing struggle for civil rights in this nation. Amy Bach takes us into courtrooms, judges' chambers, and prosecutors' offices and reveals what years of bias, neglect, and indifference have left: a system where the accused, victims, and their families get little or no individual attention, are often bewildered by the process and, at the end of the day are left without justice. As I read through these revealing and shocking pages, I was saddened, angered and outraged. I hope outrage will push citizens everywhere to demand fulfillment of the birthright of every American: equal justice under the law."—Reverend Joseph E. Lowery, Co-Founder and President Emeritus of the Southern Christian Leadership Conference

"Every judge, prosecutor, and defense lawyer should read Ordinary Injustice. I hope it will compel us to reevaluate the injustice that occurs with impunity and regularity in our criminal justice system and I recommend it with great enthusiasm to anyone concerned about inequality and the law."—Charles J. Ogletree Jr., Jesse Climenko Professor of Law, Harvard Law School, and Founding and Executive Director of the Charles Hamilton Houston Institute for Race and Justice

"Moving, illuminating, damning. Bach gets beyond the usual suspects, exposing a corrosive culture. It is a tribute to its honesty that Ordinary Injustice will make readers squirm."—Steve Bogira, author of Courtroom 302: A Year Behind the Scenes in an American Criminal Courthouse

"Here is an extraordinary survey of the American criminal justice system that shows how it has become less reliable, less rational, and less just. This is a must-read for anyone interested in how our system functions, and fails, in too many communities."—Bryan Stevenson, Director, Equal Justice Initiative, New York University School of Law

"Ordinary Injustice is anything but ordinary. Bach has woven together pathbreaking reporting, riveting history, and incisive political analysis to produce a highly original and nuanced expose. The book should be required reading for law students, lawyers, and ordinary citizens."—Samantha Power, author of Chasing the Flame: One Man's Fight to Save the World

"Lawyer and journalist Bach exposes a litany of failures and systematic shoddiness at the core of the American criminal justice system that goes unchecked because the people affected tend to be poor, minorities or both, and because problems are so pervasive that they have become invisible to defenders, prosecutors and judges alike. Bach sees this blindness as a product of a public that cares little for the rights of the accused so long as someone—anyone—is convicted and a courthouse community where prosecutor, defending attorney and judge share a commitment to maintaining order, even at the expense of justice. Readers looking for solutions will be disappointed; the author offers only a call for transparency, particularly the creation of metrics for courtroom success, and nationwide monitoring. More compelling is her portrayal of the people hurt in this system—the victims of crimes, the falsely convicted and the defenders, prosecutors and judges whose own humanity is undermined when they lose sight of the justice they supposedly serve."—Publishers Weekly

"A lawyer-journalist examines the shocking gap between theory and practice in the everyday administration of criminal justice. In the tradition of Lincoln Steffens, Bach's investigative reporting works not so much to expose individual rogues and villains, but rather to examine how American institutions, in this case the criminal-justice system, fall so far short of our ideals. To demonstrate the erosion of our society's commitment to fairness, and to illustrate the systemic problem of legal professionals so accustomed to lazy and expedient collusion that they cannot see themselves at fault, Bach usefully focuses on four state criminal-court stories. She introduces us to a Georgia public defender who fails to investigate the facts of various charges and neglects even to meet with clients until the moment he plea bargains their cases. The author examines an upstate New York judge who often doesn't inform defendants of their right to counsel, regularly imposes excessive bail and frequently coerces guilty pleas from the scared and befuddled who come before him. Bach looks at a Mississippi prosecutor who declines to prosecute bloody crimes and an Illinois prosecutor, caught up in an intraoffice drive to convict, who takes thin cases to trial. In each instance there are reasons, many understandable and fairly set out by Bach, as to why these lapses routinely occur. But to work properly, the justice system requires a zealous defense, an attentive prosecution and an impartial judge enforcing rules of evidence and procedure. Numerous Supreme Court decisions, many effortlessly translated here for the nonprofessional, offer a roadmap for proper practice. Instead, only the roughest sort of justice is meted out, and very few appear to notice or care. To address the problem, Bach calls for greater transparency and outside monitoring of the court system, but at a time when some states are verging on bankruptcy and the budgets of many others are strained to breaking, this widespread pattern of injustice will likely persist. A clear exposure of a dirty secret well known to lawyers and apt to outrage everyone else."—Kirkus Reviews

I didn't know I was going to jail," I heard a defendant say as she stood before the judge in Greene County, Georgia. Of course she didn't. No one had told her the consequences of pleading guilty. Most...

Amy Bach, a member of the New York bar, has written on law for The Nation, The American Lawyer, and New York magazine, among other publications. For her work in progress on Ordinary Injustice, Bach received a Soros Media Fellowship, a special J. Anthony Lukas citation, and a Radcliffe Fellowship. She lives in Rochester, New York, where she taught legal studies at the University of Rochester.