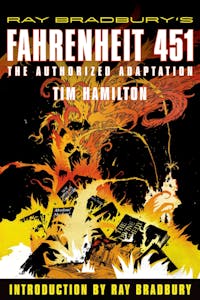 "Monday burn Millay, Wednesday Whitman, Friday Faulkner . . . Burn'em to ashes, then burn the ashes." For Guy Montag, a career fireman for whom kerosene is perfume, this is not just an official slogan. It is a mantra, a duty, a way of life in a tightly monitored world where thinking is dangerous and books are forbidden.


In 1953, Ray Bradbury envisioned one of the world's most unforgettable dystopian futures, and in Ray Bradbury's Fahrenheit 451, the artist Tim Hamilton translates this frightening modern masterpiece into a gorgeously imagined graphic novel. As could only occur with Bradbury's full cooperation in this authorized adaptation, Hamilton has created a striking work of art that uniquely captures Montag's awakening to the evil of government-controlled thought and the inestimable value of philosophy, theology, and literature. Including an original foreword by Ray Bradbury and fully depicting the brilliance and force of his canonic masterwork, Ray Bradbury's Fahrenheit 451 is a haunting work of graphic literature.

"As evidenced by Tim Hamilton's authorized graphic novel, time has not dulled its tart, terrifying resonance. Vibrant and vital, Hamilton's take on Fahrenheit 451 is far more than an illustrated version of Bradbury's 1953 classic. While its text belongs to Bradbury, Hamilton, a founding member of the online comics collaborative www.activatecomix.com, saturates the story with his own evocative energy and vision. He doesn't use all of Bradbury's words, instead allowing the story's inherent visual propulsion to add even more depth and texture to an already-indelible tale. Given this novel's graphic heft, it's strange that there has been only one film production, a 1966 adaptation written and directed by François Truffaut. Then again, perhaps that's because this is a work that, despite its many images of immolation, is more about provocative ideas than things blowing up. And here, Hamilton never compromises the cerebral for the visceral as he lures readers into a world careening into madness . . . Hamilton's arousing adaptation doesn't just update Bradbury's novel. It primes Fahrenheit 451, long a staple of high school and college reading lists, for rediscovery. Like the greatest works of art, its rugged heart and soul are evergreen; that it is, perhaps, even more relevant today, imbues the book with an unsettling prescience that even Bradbury may never have predicted."—Renee Graham, The Boston Globe

"A new adaptation of Ray Bradbury's classic work Fahrenheit 451, with a fascinating and challenging new introduction by the author, is a vivid reminder of the special power of a graphic novel, of the genre's ability to do things that words alone can't. Believe me, I often question my affection for graphic novels. I loved Superman as a kid, but when it comes to comics, we're not in Kansas anymore. Graphic novels have become terrifically popular, thanks to fiercely imaginative practitioners like Neil Gaiman, as well as to a growing body of sophisticated theoretical work on the genre by astute writers such as Scott McCloud and Douglas Wolk . . . The new graphic version of Fahrenheit 451 has helped sort out the contents of my soul. And I'm happy to report that I'm in the clear. I am quite certain that I'd be trumpeting the virtues of this work even if graphic novels weren't on everybody's hot list . . . If you know the novel, you'll still be thrilled by Tim Hamilton's artwork in this new version, which combines a comic-book clarity—the panels are simple and straightforward, without the distraction of a lot of visual razzmatazz—with a deep, humane rendering of the novel's theme . . . Some of my anti-comics correspondents claim that reading a graphic novel is not really 'reading' at all. They're right. It's something else again. In the case of Fahrenheit 451, it's more like a life-changing immersion in ideas, words, echoes, symbols, characters, lines, colors, nightmares—and finally, daybreak."—Julia Keller, Chicago Tribune

"[Hamilton] boasts the tools—and chops—to take on a Bradbury classic that's already tripped up the greats (like François Truffaut). He turns in a vivid and relevant meditation that will surely become a resurgent favorite of nervous librarians everywhere."—The Miami Herald

"This searing cautionary tale, in which ‘firemen' destroy all printed material except magazines and comics, remains one of science fiction's best-known works. And it is now, perhaps, one of the best graphic novels of 2009 . . . Where the novel felt scalding, the graphic novel feels necessary. It makes this cautionary tale hip to the present generation and updates it by transporting it to a newly vibrant medium. It's slightly frightening that after more than 55 years, the retelling seems so pertinent."—Laurel Maury, NPR

"One book that will be read (and you can take that to the bank) is the graphic novelization of Ray Bradbury's Fahrenheit 451: The Authorized Adaptation. Illustrated by Tim Hamilton, whose simple style can carry a threat all its own, this version is likely to take off like, well . . . OK, I won't say it. But couple a classic story like this with the graphic-novel format and expect reading to be a pleasure."—Kel Munger, Sacramento News & Review

"With strikingly visual flames and the mechanical hound, the story is packed with elements that explode off the pages and burn themselves into the reader's mind, even when "limited" to prose. Artist Tim Hamilton's style, clean with a muted color palette that erupts into jagged lines and eye-searing yellows and oranges when the arson begins, fits Bradbury's 50s dystopian vision like a glove. The bleak coloring reflects the life drained out of society, a dour world of ambition-free ‘happiness' and senseless satisfaction. The panel-to-panel progressions read clearly, and all of the thematic power remains on the page."—Newsarama

"This adaptation of Bradbury's iconic classic about the perils of censorship has an introduction by the author that is an insightful discussion of how a story can be altered even by its originator as it takes on new forms and lengths. Hamilton's moody palette and 1950s version of 'the future' fit well with the original text. In keeping with the period feel, such visual details as characters' noses project personal traits. Best of all, this rendition of the endangered books themselves shows well-thumbed copies of titles by authors teens will recognize as seminal, such as Darwin and Shakespeare. This is a good crossover graphic novel for classrooms but even better as a discovery for sci/fi readers browsing the shelves."—Francisca Goldsmith, Halifax Public Libraries, Nova Scotia, School Library Journal

"A graphic novel that even those who don't read graphic novels will love, this visualization of Bradbury's classic looks bold, bright, and almost too hot to handle. Even better: Hamilton, a noted artist who's been all over the map, worked directly with the [sci-fi] legend."—Library Journal

"It's no wonder Hamilton's comic novelization is authorized by Bradbury himself: this evocative button-pusher will almost certainly entice readers to seek out the original . . . Hamilton renders much of the story in triptych panels and moody, two-tone palettes that blot characters' features into Munch-like skills. This mysterious and measured tone pays off during the fiery moments, when the art fractures into dazzling red sickles."—Daniel Kraus, Booklist

"A faithful adaptation of the original, Hamilton's comics version conveys the social commentary of the novel, while using the images to develop the tone. He uses grainy, static colors and images obscured by heavy black shadows and textures to portray the oppressive nature of this world where firemen start fires instead of putting them out . . . The art solidifies atmospheric elements such as the fire and rain; fire, tapering and curling, is rendered into a crucial additional character. Since the original expounds the importance of valuing and preserving books and knowledge, adapting it into the comics form emphasizes the growth of the medium, as well as its potency across genres and subjects."—Publishers Weekly

Ray Bradbury on Illustrated Adaptations of his Works (full)

International bestselling and award-winning author Ray Bradbury discusses the illustrated adaptation of three of his greatest works, Fahrenheit 451, The Martian Chronicles, and Something Wicked This Way Comes.