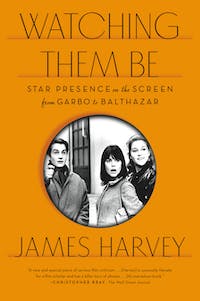 An intimate, thought-provoking exploration of the mysteries of "star presence" in cinema

"One does not go to see them act," James Baldwin wrote about the great iconic movie stars, "one goes to watch them be." It seems obvious . . . Where else besides the movies do you get to see other persons so intimately, so pressingly, so largely? Where else are you allowed such sustained and searching looks as you give to these strangers on the screen, whoever they really are? In life you try not to stare; but at the movies that's exactly what you get to do, two hours or more—safely, raptly, even blissfully.

It's this sort of amplified, heightened, sometimes transcendent "seeing" that James Harvey explores in Watching Them Be. Marvelously vivid and perceptive, and impressively erudite, this is his take on how aura is communicated in movies. Beginning where Roland Barthes left off with the face of Greta Garbo and ending with Robert Bresson's Au hasard Balthazar (and its inscrutable nonhuman star), Harvey moves nimbly and expertly through film history, celebrating actors and directors who have particularly conveyed a feeling of transcendence.

From Marlene Dietrich to John Wayne to Robert De Niro, from Nashville to Jackie Brown to Masculine/Feminine and the implicitly or explicitly religious films of Roberto Rossellini and Carl Theodor Dreyer, this is one man's personal, deeply felt account of the films that have changed his life. They will also, Harvey suggests, change yours.

"A rare and special piece of serious film criticism . . . [Harvey] is unusually literate for a film scholar and has a killer turn of phrase . . . [A] marvelous book."—Christopher Bray, The Wall Street Journal

"Harvey has a great strength: the ability to watch a movie closely and to describe his experience in the expectation that readers will share it . . . Harvey, who has to his credit such fine books as Movie Love in the Fifties and Romantic Comedy in Hollywood, sees, thinks and feels intensely when he watches a movie. More important, he has the gift of evoking what he has seen and thought and felt . . . [Watching Them Be] succeeds because of Harvey's confidence and audacity."—Charles Matthews, The Washington Post

"The pleasure of James Harvey's new book . . . comes from the feeling of being escorted through some great (and not-so-great) movies in the company of a witty and knowledgeable cinephile . . . His enthusiasm permeates this appealingly idiosyncratic study . . . The final chapter salutes what Harvey calls ‘probably the greatest movie I've ever seen,' Robert Bresson's Au Hasard Balthazar . . . It's a lovely and convincing tribute to an artwork, and to the majesty of an art form."—Lawrence Levi, Newsday

"Harvey, in astute observations and rich descriptions, attempts to put words around the ineffable force of star power."—Andrea Denhoed, The New Yorker

"[Watching Them Be] is a model of what film criticism always was at its best and what it continues to be at its best: the intersection of rare sagacity and insight with ever rarer literary and stylistic grace."—Jeff Simon, The Buffalo News

"Watching Them Be is James Harvey's best book, and consequently one of the best film books ever. The tender, penetrating gaze of the true movie lover, the depth of historical knowledge, the beauty of the prose style, the keen judgment about cinematic passages that range from the ridiculous to the sublime (sometimes simultaneously)—all add up to a delight, something of a miracle, in fact. And it's not just about movies; it's filled with a mature philosophical perspective and moral wisdom about isolation, connection, desire, limitation, transcendence, being—in short, the human condition."—Phillip Lopate, author of Portrait Inside My Head

"James Harvey's new book, Watching Them Be, is splendid. His observations about actors, actresses, and the stories they animate are profound and powerfully convincing."—Paula Fox, author of News from the World

"There are few pleasures available to adults right now deeper than settling into James Harvey's deliriously acute readings of the movies. Whether he's fixing on the grown-upness of Garbo, the surprising desolation of John Wayne, or the ‘grave clowns' of Godard, Harvey has a unique ability to make us understand how much our watching actors has shaped our own ways of being in the world. There are times—and this is one of them—when I think James Harvey may be the best writer working in America, and that he has chosen the movies as his subject is not a limitation but a huge blessing."—Anthony Giardina, author of Norumbega Park

"James Harvey is one of our best film critics, a graceful and precise writer who describes a movie so well you feel you're seeing it again, and at the same time brings such insight to it that you feel you're seeing it anew. And when it comes to acting, the means and effects of performance on the screen, he is without peer. Every review of a movie or play talks about the actors, but almost never with the kind of attuned sensibility and eye-opening intelligence you'll find here."—Gilberto Perez, author of The Material Ghost

"No writer, past or present, can make a reader feel a film as intensely as James Harvey. He can also, literally, turn a donkey into a star. Poetic, witty, incisive and with a highly original structure, Watching Them Be is Harvey's best and most moving book so far. A destination for all movie lovers."—Diane Jacobs, author of Dear Abigail

"It's James Harvey watching them be, the star presences, Garbo, and Bette Davis, and Dreyer's Falconetti's eyes, Laughton, and all the others, in all their circumstance of beauty and compelling power, their vulnerability and pathos. It's his own intense, reasonable, attentive, documented gaze that teaches us, and powerfully deepens our own experience of watching them be. A great book; his writing is passionate, dispassionate, lucid, everything to learn from. It exemplifies what criticism ought to be."—David Ferry, author of Bewilderment

"Harvey's meticulously close reading of movies illuminatingly analyzes both the ‘controlling sensibility' of stars and the viewer's process of ‘intense watching'."—Kirkus Reviews

SO WHAT WAS it about Garbo? In her time she evoked more widely felt and declared awe than any movie star ever has, before her or since. She was never the most popular star,...

James Harvey is a playwright, essayist, and critic, and the author of several books on the movies, including Movie Love in the Fifties and Romantic Comedy in Hollywood. His most recent work has appeared in The New York Review of Books and The Threepenny Review. He is a professor emeritus at the State University of New York at Stony Brook, where he teaches literature and film, and he has previously taught film at the University of California at Berkeley, the New School, and Sarah Lawrence College. He lives in Brooklyn, New York.