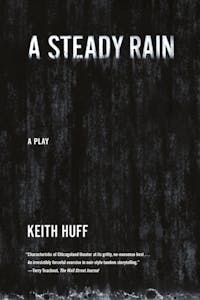 Joey and Denny have been best friends since kindergarten, and after working together for several years as policemen in Chicago, they are practically family: Joey helps out with Denny's wife and kids; Denny keeps Joey away from the bottle. But when a domestic disturbance call takes a turn for the worse, their friendship is put on the line. The result is a difficult journey into a moral gray area where trust and loyalty struggle for survival against a sobering backdrop of pimps, prostitutes, and criminal lowlifes.

A dark duologue filled with sharp storytelling and biting repartee, A Steady Rain explores the complexities of a lifelong bond tainted by domestic affairs, violence, and the rough streets of Chicago.

"A gritty, rich, thick, poetic and entirely gripping noir tale of two Chicago police officers whose inner need to serve and protect both consumes them and rips them apart."—Chris Jones, Chicago Tribune

"A Steady Rain turns out to be less like the perpetual drizzle of its title and more like a snowball that builds to an avalanche. While Huff starts with a couple of familiar characters . . . he deepens them into complex figures, compellingly human even when at their most despicable . . . A Steady Rain [has] genuine dramatic power and a sense of true tragedy."—Steven Oxman, Variety

"Huff's vivid, intricately layered script . . . lifts [the play] far above the usual clichés, both detaching us from the melodrama and imbuing it with the force of tragedy."—Richard Zoglin, Time

KEITH HUFF is a resident playwright at Chicago Dramatists and the author of numerous plays that have been produced off Broadway, internationally, and nationally. He lives in Chicago.