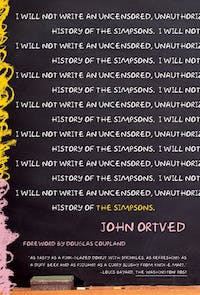 The Simpsons is one of the most successful shows to ever run on television. From its first moment on air, the series's rich characters, subversive themes, and layered humor resounded deeply with audiences both young and old who wanted more from their entertainment than what was being meted out at the time by the likes of Full House, Growing Pains, and Family Matters. Spawned as an animated short on The Tracy Ullman Show—mere filler on the way to commercial breaks—the series grew from a controversial cult favorite to a mainstream powerhouse, and after nineteen years the residents of Springfield no longer simply hold up a mirror to our way of life: they have ingrained themselves into it.
John Ortved's oral history is the first-ever look behind the scenes at the creation and day-to-day running of The Simpsons, as told by many of the people who made it: among them writers, animators, producers, and network executives. It's an intriguing yet hilarious tale, full of betrayal, ambition, and love. Like the family it depicts, the show's creative forces have been riven by dysfunction from the get-go—outsize egos clashing with studio executives and one another over credit for and control of a pop-culture institution. Contrary to popular belief, The Simpsons did not spring out of one man's brain, fully formed, like a hilarious Athena. Its inception was a process, with many parents, and this book tells the story.

"Ortved's 'uncensored, unauthorized' history . . . is as tasty as a pink-glazed donut with sprinkles, as refreshing as a Duff beer and as piquant as a curry slushy from Kwik-E Mart."—Louis Bayard, The Washington Post

"Brisk and engaging and likely to entertain Simpsons die-hards without breaking a sweat . . . a good balance between information and gossip; between a story about simmering creativity and a story about flawed human beings who showed their flaws—as many do—more and more as the money accumulated . . . a rich read for fans."—Linda Holmes, NPR

"[Ortved] takes us into the writers' room, where a constantly changing cast of hippies, freaks, weirdos, poets and mystics compete to be the funniest guy in the room . . . Behind all this is the underlying theme that these guys were free, free of the inhibitions of network television . . . The Simpsons was allowed to break the sitcom mould and take popular television to a new level."—The Times (London)

"A gloriously windy oral history crammed with behind-the-scenes squabbles and power grabs . . . I completely devoured The Simpsons: An Uncensored, Unauthorized History, even if I felt a little bad afterward for the central players who got sucker punched. The early details, as show creator Matt Groening goes from obscure alt-weekly cartoonist to megamogul via talent and chance, remain a well-known showbiz tale. John Ortved's sources (including artist Art Spiegelman) tell it in a fresh, vivid way. The subsequent testimony about the empire Groening created is contentious and mesmerizing."—Ken Tucker, Entertainment Weekly

"Ortved has done dozens of in-depth interviews, and they make the book. His oral history approach is particularly compelling . . . where the disagreements over who deserves credit for The Simpsons take on a Rashomon-like complexity. Ortved seems evenhanded in his assessments of principals like Matt Groening and James Brooks—few of whom come through unscathed . . . Ortved has done a remarkable job of bringing to light the creators of our beloved four-fingered creatures with the bright yellow skin."—Publishers Weekly