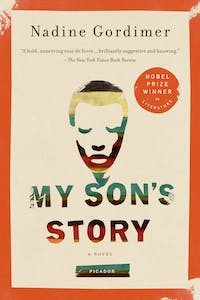 When Will skips school to slip off to a movie theater near Johannesburg, he is shocked to see his father. An ordinary mishap, but his father is no ordinary man. He is a colored and revered anti-apartheid hero, and his female companion is a white activist fiercely dedicated to the cause. As Will struggles with confusion and bitterness, My Son's Story unravels the consequences of one man's infidelity as a new South Africa violently emerges from the apartheid.

"Captures with convincing detail the ecstatic rewards and terrifying costs of revolutionary politics . . . Delineates with unblinking candor the collision of public and private experience that takes place on a daily basis in South Africa . . . A fiercely intelligent novel—one of her most powerful yet."—Michiko Kakutani, The New York Times

"Nadine Gordimer has given us a work of bleak beauty and enormous force."—The Washington Post Book World

"Gordimer has taken South Africa's tragedy and laid the truth of it in our laps. The story she tells is lucid and achingly alive."—The Boston Sunday Globe

"The moral urgency that informs Nadine Gordimer's novels and stories endows them with a virtue distinct from their literary merits. Her subject is the agony of South Africa; her theme, the corruption that leads to betrayal. Her country's sickness touches everyone in it; not just its bigoted rulers, but its reformers as well . . . A brave writer, she has, over the decades and at some risk to herself, combined a layered moral vision with an acute apprehension of how people react to a cruel and self-destructive society." —Newsweek

"Although all of Gordimer's novels are written from a political point of view—as an opponent of apartheid and all its work—her intelligence is too subtle, her imagination too exact, to allow her to produce a merely political novel . . . My Son's Story maintains the finest balance of sympathies."—The Independent

"The turmoil in South Africa leaves no member of a decorous colored family untouched, as the schoolmaster husband turns activist and lover. Gordimer is perceptive, unflinching, and sympathetic"—The Observer (London)

"If one were never to read any other literature about South Africa, Gordimer's work should be enough. For more than thirty years she has delineated each shift and change in the system in [her] novels and short stories that intertwine the personal with the political. As a literary keeper of records, she has no peer."—The Sunday Times (London)

"Beautifully felt, both in its anger and its compassion. It is so rich as to make praise superfluous, so vital and disturbing as to send us . . . back into the world, with a heightened sense of what life in it might mean."—USA Today

''My Son's Story . . . offers ample evidence why [Gordimer] was chosen for [the 1991] Nobel Prize for Literature."—The Globe and Mail (Toronto)

''My Son's Story, about a colored South African family ravaged by the father's affair with a white human rights advocate, probes with breathtaking power and precision the complexities of 'love, love/hate,' and the interplay of public and private reality. First-person narration shows son Will's struggle to deal with confusion and bitterness after discovering father Sonny's infidelity; alternating third-person sequences depict Sonny's evolution from a committed schoolteacher and devoted husband/father into a resistance worker for whom the movement itself ultimately becomes a second family . . . Gordimer retains perfect control over her material, rendering her characters' shifting perspectives with truly extraordinary empathy and discernment. Highly recommended."—Library Journal

"Gordimer delivers her most perceptive and powerful novel in years. The story of a man's evolution as a political activist and the toll it takes on his family and on him, it is also a picture of a marriage and of an extramarital affair, set against a backdrop of daily life in segregated South Africa, even as the winds of change begin to blow. The novel is eloquent in its understated prose and anguished understanding of moral complexities."—Publishers Weekly

You had a Father, let your son say so.

Nadine Gordimer (1923-2014), the recipient of the 1991 Nobel Prize in Literature, was born in a small South African town. Her first book, a collection of stories, was published when she was in her early twenties; she went on to publish more than forty works of fiction and nonfiction.

Her novels include the Booker Prize-winning The Conservationist, Commonwealth Writers’ Prize-winning The Pickup, and No Time Like the Present. A World of Strangers, The Late Bourgeois World, and the award-winning Burger's Daughter were originally banned in South Africa. Gordimer’s short story collections include Loot , Jump and Other Stories, and Something Out There. She also published literary and political essay collections such as The Essential Gesture; Writing and Being, the Charles Eliot Norton Lectures she gave at Harvard in 1994; and Living in Hope and History.

Ms. Gordimer was a vice president of PEN International and an executive member of the Congress of South African Writers. She was a fellow of the Royal Society of Literature in Great Britain and an honorary member of both the American Academy of Arts and Letters and the American Academy of Arts and Sciences. She was also a Commandeur of l’Ordre des Arts et des Lettres (France). She held fourteen honorary degrees from universities including Harvard, Yale, the University of Leuven in Belgium, Oxford University, and Cambridge University.