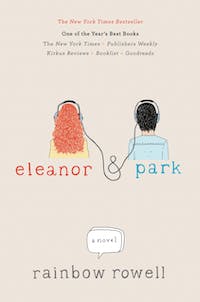 Set over the course of one school year in 1986, this is the story of two star-crossed misfits—smart enough to know that first love almost never lasts, but brave and desperate enough to try. When Eleanor meets Park, you'll remember your own first love—and just how hard it pulled you under.

"When I began reading contemporary fiction in high school, I remember feeling that each book was an absolute revelation . . . The novel's novelty passes, of course. I'm 35 now . . . I've seen the conventions, and I've seen them interrogated. But I have never seen anything quite like Eleanor & Park. Rainbow Rowell's first novel for young adults is a beautiful, haunting love story . . . It's set in 1986 . . . There's bullying, sibling rivalry, salvation through music and comics, a monstrous stepparent—and I know, we've seen all this stuff. But you've never seen Eleanor & Park. Its observational precision and richness make for very special reading. Eleanor is a 'big girl' with bright red hair . . . She's also poor—she cannot afford a toothbrush or batteries for her Walkman. (Some readers may initially find this unrealistic, but through the novel one comes to have a better understanding of how poverty interacts with abuse to marginalize and oppress.) Park is a half-Korean kid who's passably popular but separated from the larger social order of his school both by his race and by his passion for comic books and good music. On the first day of school, Eleanor sits down next to him on the bus. Over time, she begins reading his comics over his shoulder. Then he lends them to her. They bond over music. Eventually, they begin holding hands on the rides to and from school . . . Every romance has its obstacle . . . the obstacle in Eleanor & Park is simply the world. The world cannot stomach a relationship between a good-looking Korean kid and Big Red. The world cannot allow Eleanor a boyfriend of any kind, because she's poor and fat and dresses funny. The world cannot allow Park a girlfriend because he likes wearing eyeliner, and everyone knows that's gay. The world is the obstacle, as it always is when you're 16 and truly in love. Park's parents—two of the best-drawn adults I can remember in a young adult novel—serve as evidence that sometimes love conquers the world, and Eleanor's family is a reminder that sometimes it doesn't . . . Eleanor & Park reminded me not just what it's like to be young and in love with a girl, but also what it's like to be young and in love with a book."—John Green, The New York Times

"It's the start of a new school year in 1986 Omaha when sophomores Eleanor and Park meet for the first time on the bus. They are an unusual pair: she's the new girl in town, an ostracized, bullied 'big girl' with bright red curly hair, freckles, and an odd wardrobe; he's a skinny half-Korean townie who mostly wears black and tries to stay out of the spotlight. But as they sit together on the school bus every day, an intimacy gradually develops between them. At first they don't talk; then she reads his comics with him; he makes her mixtapes of his favorite rock bands; they hold hands; and eventually they are looking for ways to spend every waking hour together. Their slowly evolving but intense relationship is chaste first love, authentic in its awkwardness—full of insecurities, miscommunications, and sexual awakenings—and life-changing for them both. When Eleanor's unstable home life (replete with abusive stepfather) ultimately tears the young lovers apart, the novel ends realistically: uncertain, yet still hopeful. Rowell presents her teen protagonists' intelligent observations, extreme inner desires, and irrational feelings through compelling alternating narrations. She imbues the novel with rich character development, a spot-on depiction of the 1980s, and powerful descriptive passages ('Holding Eleanor's hand was like holding a butterfly. Or a heartbeat. Like holding something complete, and completely alive'). It's an honest, heart-wrenching portrayal of imperfect but unforgettable love."—Cynthia K. Ritter, The Horn Book

"Eleanor & Park is a breathless, achingly good read about love and outsiders."—Stephanie Perkins, New York Times bestselling author of Anna and the French Kiss and Lola and the Boy Next Door

"Sweet, gritty, and affecting . . . Rainbow Rowell has written an unforgettable story about two misfits in love. This debut will find its way into your heart and stay there."—Courtney Summers, author of This Is Not a Test and Cracked Up to Be

"In her rare and surprising exploration of young misfit love, Rowell shows us the beauty in the broken."—Stewart Lewis, author of You Have Seven Messages

"A sweet, touching story of first love. Told from both perspectives, the story's emphasis rests with Eleanor—how she keeps within herself at home but allows Park in as she learns to trust him. Being with Park is Eleanor's only sanctuary yet he is more lyrical when describing their relationship . . . The bittersweet ending hints at hope for two characters who readers will have come to care about. This is a stunning debut from a promising new author."—Deborah Wenk, VOYA

"Eleanor and Park don't meet cute; they meet vexed on the school bus, trapped into sitting together by a dearth of seats and their low social status . . . Although both teens want only to fade into the background, both stand out physically and sartorially, arming themselves with band T-shirts (Park) and menswear from thrift stores (Eleanor). Despite Eleanor's resolve not to grow attached to anything, and despite their shared hatred for clichés, they fall, by degrees, in love. Through Eleanor and Park's alternating voices, readers glimpse the swoon-inducing, often hilarious aspects of first love, as well as the contrast between Eleanor's survival of grim, abuse-plagued poverty and Park's own imperfect but loving family life. Funny, hopeful, foulmouthed, sexy and tear-jerking, this winning romance will captivate teen and adult readers alike."—Kirkus Reviews (starred review)

"Right from the start of this tender debut, readers can almost hear the clock winding down on Eleanor and Park . . . Their worlds couldn't be more different . . . The couple's personal battles are also dark mirror images. Park struggles with the realities of falling for the school outcast; in one of the more subtle explorations of race and 'the other' in recent YA fiction, he clashes with his father over the definition of manhood. Eleanor's fight is much more external, learning to trust her feelings about Park and navigating the sexual threat in Richie's watchful gaze. In rapidly alternating narrative voices, Eleanor and Park try to express their all-consuming love. 'You make me feel like a cannibal,' Eleanor says. The pure, fear-laced, yet steadily maturing relationship they develop is urgent, moving, and, of course, heartbreaking, too."—Courtney Jones, Booklist (starred review)

"In this novel set in the 1980s, teenagers Eleanor and Park are outsiders; Eleanor, because she's new to the neighborhood, and Park, because he's half Asian. Although initially wary of each other, they quickly bond over their love of comics and 1980s alternative music. Eleanor's home life is difficult; her stepfather physically abuses her mother and emotionally abuses Eleanor and her siblings. At school, she is the victim of bullying, which escalates into defacement of her textbooks, her clothes, and crude displays on her locker. Although Park's mother, a Korean immigrant, is initially resistant to the strange girl due to her odd fashion choices, his father invites Eleanor to seek temporary refuge with them from her unstable home life. When Eleanor's stepfather's behavior grows even more menacing, Park assists in her escape, even though it means that they might not see each other again. The friendship between the teens is movingly believable . . . The revelation about the person behind the defacement of Eleanor's textbooks is stunning. Although the narrative points of view alternate between Eleanor and Park, the transitions are smooth. Crude language is realistic . . . For readers who are drawn to quirky love stories or 1980s pop culture. Grade 9 and up."—Jennifer Schultz, Fauquier County Public Library, Warrenton, Virginia, School Library Journal (starred review)

"Half-Korean sophomore Park Sheridan is getting through high school by lying low, listening to the Smiths (it's 1986), reading Alan Moore's Watchmen comics, never raising his hand in class, and avoiding the kids he grew up with. Then new girl Eleanor gets on the bus. Tall, with bright red hair and a dress code all her own, she's an instant target. Too nice not to let her sit next to him, Park is alternately resentful and guilty for not being kinder to her. When he realizes she's reading his comics over his shoulder, a silent friendship is born. And slowly, tantalizingly, something more. [Rowell] has a gift for showing what Eleanor and Park, who tell the story in alternating segments, like and admire about each other. Their love is believable and thrilling, but it isn't simple: Eleanor's family is broke, and her stepfather abuses her mother. When the situation turns dangerous, Rowell keeps things surprising, and the solution—imperfect but believable—maintains the novel's delicate balance of light and dark.."—Publishers Weekly (starred review)

"This novel is so refreshingly different from anything I've read this year that I can't seem to stop talking about it . . . [Eleanor and Park's] love doesn't involve life-threatening situations, love triangles, or brutal sacrifice, and they are not ethereally beautiful, nor do they feel a supernatural bond. Their love is simply raw and honest. This is the kind of love that teens should read about: love with mistakes, misunderstandings, and awkward moments . . . Rowell writes from both Eleanor and Park's points of view, so the reader is able to see how each of the characters reacts to the same situation. One of my favorite scenes is when, after having her clothes dumped in the toilet by the school bully, Eleanor has to wear her too-tight tracksuit in the halls and bumps into Park. The wonderful juxtaposition of their interpretations of this and other incidents is one of the tantalizing qualities of the novel. Set in 1986, this story gives young readers a glimpse of what not-so-young readers find nostalgic, while also touching on some very serious issues. Eleanor navigates the dangers of domestic violence [and lives] with the threat of being driven out of her home. Rowell doesn't shy away from describing the unpleasantries of living in dirty, ripped clothing or bathing with a drape as a bathroom door. In contrast, Park's wealthy middle-class upbringing highlights class differences in suburban America while romanticizing neither . . . [A] truly excellent read."—Hannah Moushabeck, Children's Department Director, Odyssey Bookshop, South Hadley, Massachusetts, Publishers Weekly

XTC was no good for drowning out the morons at the back of the bus.

Park pressed his headphones into his ears.

Tomorrow he was going to bring Skinny Puppy or the Misfits. Or maybe he'd make a special...

Watch the book trailer of Eleanor & Park by Rainbow Rowell

RAINBOW ROWELL lives in Omaha, Nebraska, with her husband and two sons. She's also the author of Landline, Fangirl and Attachments.