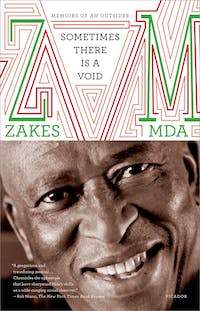 
Zanemvula Mda was born in 1948 into a family of lawyers and grew up in Soweto's ambitious educated black class. At age fifteen he crossed the Telle River from South Africa into Basutoland (Lesotho), exiled like his father, a "founding spirit" of the Pan Africanist Congress. Exile was hard, but it was just another chapter in Mda's coming-of-age. He served as an altar boy (and was preyed on by priests), flirted with shebeen girls, feared the racist Boers, read comic books alongside the literature of the PAC, fell for the music of Dvorák and Coltrane, wrote his first stories—and felt the void at the heart of things that makes him an outsider wherever he goes. The Soweto uprisings called him to politics; playwriting brought him back to South Africa, where he became writer in residence at the famed Market Theatre; three marriages led him hither and yon; acclaim brought him to America, where he began writing the novels that are so thick with the life of his country. In all this, Mda struggled to remain his own man, and with Sometimes There Is a Void he shows that independence opened the way for the stories of individual South Africans in all their variety.

"Mda's greatest gift is his Dickensian social range, his ability to generate characters from diverse backgrounds, colluding and colliding across the barriers erected to divide them. Mda's gregarious and transfixing memoir, Sometimes There Is a Void, chronicles the upheavals that have sharpened his skills as a wide-ranging social observer . . . Mda's autobiographical voice strikes a fine balance between outward engagement and inner exploration . . . To his credit, in a deeply unsettled life, he has nurtured this capacity to find within the creative act itself new, reviving forms of homecoming."—Rob Nixon, The New York Times Book Review

"A moving, funny, and deeply bawdy book that meanderingly describes the South African writer's coming of age during a period when Nelson Mandela was more well-known for being a lady-killer than a politician, and the Boers of South Africa were boogeymen to young boys all over southern Africa. Into the alphabet soup of political allegiances jumps the young Mda, son of a lawyer—and a lover, not a fighter . . . The alternating warmth and horror of Mda's recollections make Sometimes There Is a Void a strangely gripping book . . . Here is a man looking back on his life and country with joy and sorrow, and all their excessive gestures. He chafes against easy narratives. They were—he was—alive with ideas, growing up at the dawn of South Africa's independence. But they were also alive with so much else: sex and food and booze, family life and music. Lift the lid off this big overstuffed book and all of it—or what feels like all of it—comes tumbling out."—John Freeman, The Boston Globe

"Born into a prominent South African activist family, Mda fled to Lesotho at the age of fifteen to join his father, a radical lawyer living in exile. He went on to become one of the most celebrated playwrights and novelists of the post-apartheid era."—The New Yorker

"Mda's electric honesty is a live current through his remarkably gorgeous, urgent, poetic, matter-of-fact memoir. But don't get lulled into thinking this is the book of one bravely truthful man's journey into self-expression. Mda has shaken off calcification, identity, ego and walked us all into sovereignty and selfhood. Read this, and be prepared to examine your own soul as never before. Speaking for myself, I know it's been a long time since I have been so undone and remade by another person's words."—Alexandra Fuller, author of Cocktail Hour Under the Tree of Forgetfulness

"Both the author's life and his narrative style are characterized by a sensorial roving through experience . . . Mda's eventful life is full of colorful characters, including childhood sweethearts, pedophile priests, shaman uncles and carousing artists. The structure of the narrative is challenging, as the author moves fluidly between the past and a point of relative present, and provides extensive commentary on both the details and the major events of his life . . . A readable, insightful memoir by a major talent, particularly enjoyable for those already familiar with Mda's body of work or with the cultural moments that helped to shape him."—Kirkus Reviews

"It is easy to become immersed in this memoir by the acclaimed and peripatetic South African playwright involved with the Market Theatre . . . Throughout these pages is Mda's quest for a form of assimilation while maintaining self-identity and acceptance. He ponders himself as adrift and on the periphery: the ultimate outsider—even to family and perhaps, most tellingly, to himself . . . In all, Mda's deeper struggles parallel those of all South Africans seeking identity and freedom."—Publishers Weekly

THE SMELL OF LIFE is back on the pink mountain. Human life, that is, for other forms have always thrived here even after we had left. Before our return shrubs and bushes flourished, but their fused aromas highlighted...

Zakes Mda is a professor of creative writing at Ohio University. He has been a visiting professor at both Yale and the University of Vermont. Among his novels, The Heart of Redness (FSG, 2002) won the Richard Wright Zora Neale Hurston Legacy Award. He lives in Johannesburg, South Africa, and Athens, Ohio.