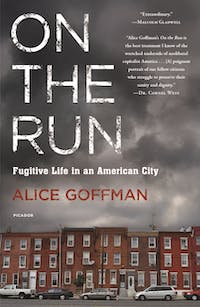 Alice Goffman's on-the-ground account documents the effects of the American criminal justice system in a predominately African-American neighborhood in Philadelphia. Forty years in, the War on Drugs has done almost nothing to prevent drugs from being sold or used, but it has nonetheless created a little-known surveillance state in America's most disadvantaged neighborhoods. Arrest quotas and high-tech surveillance techniques criminalize entire blocks, and transform the very associations that should stabilize young lives—family, relationships, jobs—into liabilities, as the police use such relationships to track down suspects, demand information, and threaten consequences. Goffman spent six years living in one such neighborhood in Philadelphia, and her close observations and often harrowing stories reveal the pernicious effects of this pervasive policing. Goffman introduces us to an unforgettable cast of young African American men who are caught up in this web of warrants and surveillance—some of them small-time drug dealers, others just ordinary guys dealing with limited choices.

"[On the Run] is a closely observed study of the impact of the criminal justice system on everyday life in a low-income African-American neighborhood of Philadelphia."—Jennifer Schuessler, The New York Times

"Necessary . . . Goffman's lively prose—communicated in a striking voice rare for an academic—opens a window into a life where paranoia has become routine . . . She goes beyond her street-level focus to argue something more profound."—Baltimore City Paper

"Alice Goffman's On the Run is the best treatment I know of the wretched underside of neo-liberal capitalist America. Despite the social misery and fragmented relations, she gives us a subtle analysis and poignant portrait of our fellow citizens who struggle to preserve their sanity and dignity."—Cornel West

On the Run Book Trailer

Watch the trailer for the new book by Tristan Bancks. Out 11/17/2015 from Farrar, Straus and Giroux

ALICE GOFFMAN grew up in Philadelphia and attended graduate school at Princeton University. She teaches in the sociology department at the University of Wisconsin-Madison. She is the author of On the Run: Fugitive Life in an American City.