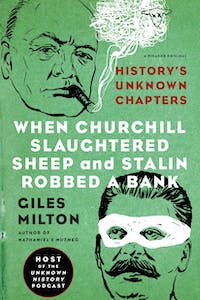 In When Churchill Slaughtered Sheep and Stalin Robbed a Bank, the second installment in his outrageously entertaining series, History’s Unknown Chapters, Giles Milton shows his customary historical flair as he delves into the little-known stories from history, like when Stalin was actually assassinated with poison by one of his inner circle; the Russian scientist, dubbed the “Red Frankenstein,” who attempted to produce a human-ape hybrid through ethically dubious means; the family who survived thirty-eight days at sea with almost no water or supplies after their ship was destroyed by a killer whale; or the plot that served as a template for 9/11 in which four Algerian terrorists attempted to hijack a plane and fly it into the Eiffel Tower.

On a blustery July morning in 1943, a strange kerfuffle could be seen taking place on the shores of Gruinard Bay on the west coast of Scotland. A group of men,...

Giles Milton is a writer and journalist. He has contributed articles to most of the British national newspapers as well as many foreign publications, and specializes in the history of travel and exploration. In the course of his researches, he has traveled extensively in Europe, North Africa, the Middle East, and the Americas. He has written several books of nonfiction, including the bestselling Nathaniel's Nutmeg, and has been translated into fifteen languages worldwide. He is the author of the novel Edward Trencom's Nose.