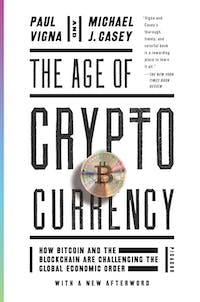 Bitcoin became a buzzword overnight. A cyber-enigma with an enthusiastic following, it pops up in headlines and fuels endless media debate. You can apparently use it to buy anything from coffee to cars, yet few people seem to truly understand what it is. This raises the question: Why should anyone care about bitcoin?

In The Age of Cryptocurrency, Wall Street journalists Paul Vigna and Michael J. Casey deliver the definitive answer to this question. Cybermoney is poised to launch a revolution, one that could reinvent traditional financial and social structures while bringing the world's billions of "unbanked" individuals into a new global economy. Cryptocurrency holds the promise of a financial system without a middleman, one owned by the people who use it and one safeguarded from the devastation of a 2008-type crash.

But bitcoin, the most famous of the cybermonies, carries a reputation for instability, wild fluctuation, and illicit business; some fear it has the power to eliminate jobs and to upend the concept of a nation-state. It implies, above all, monumental and wide-reaching change—for better and for worse. But it is here to stay, and you ignore it at your peril.

Vigna and Casey demystify cryptocurrency—its origins, its function, and what you need to know to navigate a cyber-economy. The digital currency world will look very different from the paper currency world; The Age of Cryptocurrency will teach you how to be ready.

“Cryptocurrency devotes detailed, ­anecdote-filled chapters to the genesis and reception of Bitcoin . . . Vigna and Casey’s thorough, timely and colorful book is a rewarding place to learn about it all."—Emanuel Derman, The New York Times Book Review

“Smart and conscientious, The Age of Cryptocurrency is the most thorough and readable account of the short life of this controversial currency."—Daniel Gross, The Washington Post

"For any book on bitcoin to be worth reading, though, it has to delve further: into the crypto-currency’s ideological and technical roots, for instance, or what it adds to the narrative of money, or even what its economic and political impact may be. The currency’s dollar price may be three-quarters down on its peak, but the underlying technology also provides plenty of intellectual fodder—and is unlikely to go away. So there is plenty to write about if you are serious. Paul Vigna and Michael Casey, two journalists at the Wall Street Journal, are certainly serious."—The Economist

"[Vigna and Casey] have produced more than a bitcoin 101: theirs is a smarter, more holistic take on not just bitcoin, but the potential of all digital currencies to change the way we send each other money. In fact, it goes deeper than the average mildly interested reader likely cares to dig (the book gets a little bogged down in an exploration of the crash of bitcoin exchange Mt. Gox). But for those on the outside looking in, it is interesting and lucid enough to hold attention while it educates you."—Daniel Roberts, Fortune

FROM BABYLON TO BITCOIN

The eye has never seen, nor the hand touched a dollar.

For any currency to be viable, be it a decentralized cryptocurrency issued by a computer...

A cyber-phenomenon that became a buzzword virtually overnight, Bitcoin constantly makes headlines, fueling endless media debate over its viability. And though today it can be used to buy almost anything, few understand the controversial currency and most think it will never be mainstream. So should we even care about Bitcoin?

MICHAEL J. CASEY writes for The Wall Street Journal, covering global finance in his "Horizons" column. He is a frequent contributor to the Journal's MoneyBeat blog and co-authors the daily "BitBeat" with Paul Vigna. He is the host of the book-themed video series "WSJ Afterword" and a frequent guest on and host of "The News Hub" and "MoneyBeat." His podcast on world economic affairs is forthcoming. Casey has written for such publications as Foreign Policy, The Washington Post, and The Financial Times. He is the author of two books: Che's Afterlife: The Legacy of an Image (Vintage, 2009), one of Michiko Kakutani's "best books of 2009," and The Unfair Trade: How Our Broken Financial System Destroys the Middle Class (Crown, 2012).

PAUL VIGNA is a markets reporter for The Wall Street Journal, covering equities and the economy. He is a columnist and anchor for MoneyBeat. Previously a writer and editor of the MarketTalk column in DowJones Newswires, he has been a guest on the Fox Business Network, CNN, the BBC, and the John Batchelor radio show. He has been interviewed by Bitcoin magazine and appeared on the Bitcoins & Gravy podcast, and boasts a collective 20 years of journalism experience.