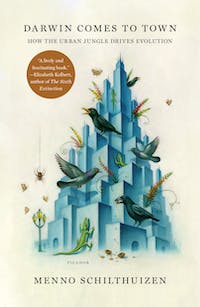 Menno Schilthuizen is one of a growing number of “urban ecologists” studying how our manmade environments are accelerating and changing the evolution of the animals and plants around us. In Darwin Comes to Town, he takes us around the world for an up-close look at just how stunningly flexible and swift-moving natural selection can be.

With human populations growing, we’re having an increasing impact on global ecosystems, and nowhere do these impacts overlap as much as they do in cities. The urban environment is about as extreme as it gets, and the wild animals and plants that live side-by-side with us need to adapt to a whole suite of challenging conditions: they must manage in the city’s hotter climate (the “urban heat island”); they need to be able to live either in the semidesert of the tall, rocky, and cavernous structures we call buildings or in the pocket-like oases of city parks (which pose their own dangers, including smog and free-rangingdogs and cats); traffic causes continuous noise, a mist of fine dust particles, and barriers to movement for any animal that cannot fly or burrow; food sources are mainly human-derived. And yet, as Schilthuizen shows, the wildlife sharing these spaces with us is not just surviving, but evolving ways of thriving.

Darwin Comes toTown draws on eye-popping examples of adaptation to share a stunning vision of urban evolution in which humans and wildlife co-exist in a unique harmony. It reveals that evolution can happen far more rapidly than Darwin dreamed, while providing a glimmer of hope that our race toward over population might not take the rest of nature down with us.

“Darwin Comes to Town is a brilliant reproach to all the biologists who believe that their true calling is to study the ‘vanishing quantity of unspoilt nature’—the dwindling areas of forest and wilderness little touched by human activity—and who neglect the more exciting evolutionary change taking place in the towns and cities where most of them live.”—Clive Cookson, Financial Times

“Schilthuizen is taking on three centuries of literature and polemic that defends the virtues of rural nature against the vices of city life . . . This is a spellbinding and important book . . . The message is thrilling.”—Bryan Appleyard, The Sunday Times (UK)

“In a conversational style as appealing as it is informative, Schilthuizen . . . explores myriad ways in which plants and animals have adapted to modern urban environments . . . Schilthuizen is careful throughout to distinguish between true evolutionary changes and learned behaviors passed between individuals. He also does a superb job of introducing important ecological principles along the way, leaving readers with a fascinating question: ‘Can we harness the power of urban evolution to use it to make more livable cities for the future?’”—Publishers Weekly (starred review)

“In this delightful account . . . readers who assume that pigeons, cockroaches, and rats are the only representatives of city biology will learn that it is far more complex . . . An expert romp through urban natural history.”—Kirkus Reviews (starred review)


Thousands of animal species have evolved to cohabit with ants in their “cities.” Here, a Lomechusa rove beetle is being cuddled by its ant host.

MENNO SCHILTHUIZEN is a senior research scientist at Naturalis Biodiversity Center in the Netherlands and professor of evolutionary biology at Leiden University. The author of more than 100 papers in scientific literature, he has also written more than 250 stories, columns, and articles for publications including New Scientist, Time, and Science. A frequent guest on radio and television, he is the author of three previous books: Frogs, Flies and Dandelions (2001), The Loom of Life (2008), and Nature’s Nether Regions (2014). Together with Iva Njunjic, he runs Taxon Expeditions, which organizes scientific expeditions for laypeople.