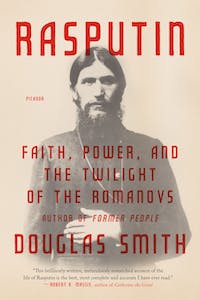 A hundred years after his murder, Rasputin continues to excite the popular imagination as the personification of evil. Numerous biographies, novels, and films recount his mysterious rise to power as Nicholas and Alexandra's confidant and the guardian of the sickly heir to the Russian throne. His debauchery and sinister political influence are the stuff of legend, and the downfall of the Romanov dynasty was laid at his feet.

But as the prizewinning historian Douglas Smith shows, the true story of Rasputin's life and death has remained shrouded in myth. A major new work that combines probing scholarship and powerful storytelling, Rasputin separates fact from fiction to reveal the real life of one of history's most alluring figures. Drawing on a wealth of forgotten documents from archives in seven countries, Smith presents Rasputin in all his complexity--man of God, voice of peace, loyal subject, adulterer, drunkard. Rasputin is not just a definitive biography of an extraordinary and legendary man but a fascinating portrait of the twilight of imperial Russia as it lurched toward catastrophe.

"[Douglas Smith's] scrupulous, insightful and thorough study will surely be the definitive account of one of the most controversial personalities of Russian (and European) history . . . Mr. Smith's research busts various Rasputin myths through a careful analysis of contemporary sources and a meticulous attention to the archives . . . All of this Mr. Smith presents lucidly, vividly and sympathetically . . . Rasputin is sharply drawn and unmistakable."—Edward Lucas, The Wall Street Journal

“Magisterial . . . This balanced, impeccably researched book is a revelation, as richly detailed and engrossing as any novel.”—Boris Dralyuk, Los Angeles Review of Books

“[Rasputin] is by far the most comprehensive account of Rasputin to date, brimming with complexities and fascinating detail, and stands as an enlightening re-evaluation of this crucial figure in Russian history.”—Helen Rappaport, The Telegraph (UK)

“[Smith] renders in great detail the ten years that Rasputin spent on the national stage, from 1906 until his murder in 1916. Sorting through the Rasputin mythology, Smith discards the apocryphal and weighs the plausible, balancing the extraordinary mix of mysticism and debauchery that made the peasant monk notorious. Digging through countless and often conflicting firsthand accounts and impressions, Smith gives Rasputin’s mystique a depth and a fine edge missing from prior histories.”—Robert Legvold, Foreign Affairs

On a bright spring day in 1912 Sergei Prokudin-Gorsky carried his large tripod camera down to the banks of the Tura River in the remote Siberian village of Pokrovskoe....

Douglas Smith is an award-winning historian and translator and the author of Former People, Rasputin, and other books on Russia. Before becoming a historian, he worked for the U. S. State Department in the Soviet Union and as a Russian affairs analyst for Radio Free Europe/Radio Liberty in Munich. He lives in Seattle with his wife and two children.