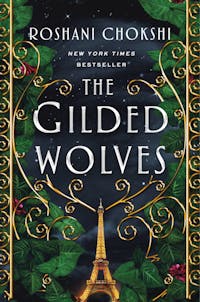 No one believes in them. But soon no one will forget them.

It's 1889. The city is on the cusp of industry and power, and the Exposition Universelle has breathed new life into the streets and dredged up ancient secrets. Here, no one keeps tabs on dark truths better than treasure-hunter and wealthy hotelier Séverin Montagnet-Alarie. When the elite, ever-powerful Order of Babel coerces him to help them on a mission, Séverin is offered a treasure that he never imagined: his true inheritance.

To hunt down the ancient artifact the Order seeks, Séverin calls upon a band of unlikely experts: An engineer with a debt to pay. A historian banished from his home. A dancer with a sinister past. And a brother in arms if not blood.

Together, they will join Séverin as he explores the dark, glittering heart of Paris. What they find might change the course of history—but only if they can stay alive.

“In this delicious first entry in a new series from a veteran YA author, readers will find sumptuous visuals, deep characters and a maddening eleventh-hour twist.”—Bookpage (starred review)

"The Gilded Wolves sets up a fantastical great heist with a series of clues and problems the well-developed, diverse group of teens must decipher. Chokshi's world is lush and her characters distinct and engaging—this first in a new series is as sharp and lustrous as the title suggests."—Shelf Awareness

"A gorgeously layered story, with characters that make you laugh and ache and cheer."—Renée Ahdieh, New York Times bestselling author of The Wrath and The Dawn

"A masterpiece of imagination. You will want this book to steal your heart so that you will never have to leave this story."—Stephanie Garber, New York Times bestselling author of Caraval

"This is a book to swan dive into, swim around in, luxuriate in. Trust me, you won’t want to come out.”—Laini Taylor, New York Times bestselling author of Strange The Dreamer

"The Gilded Wolves is the smart, dark adventure YA readers have been waiting for.”—Adrienne Young, New York Times bestselling author of Sky In The Deep

“Chokshi delivers a thrilling, gritty new fantasy set in an alternate nineteenth century Paris . . . Chokshi shines as a master storyteller in her newest novel; the setting, world building, plot, and conflict are all staggering. However, the elements that perhaps shine the most are the history, riddles, mysteries, and science, woven together in a world brimming with power and magic.”—Booklist (starred review)

“Chokshi has created an inclusive and authentic cast with obvious chemistry and affection for one another and infuses the tale with witty banter and twists. A delectably intriguing adventure for all teen shelves.”—School Library Journal (starred review)

Around him, the masked members of the Order of Babel whipped out white fans, murmuring to themselves as they eagerly awaited...

Roshani Chokshi is the author of commercial and critically acclaimed books for middle grade and young adult readers that transport audiences to fantastical worlds heavily inspired by world mythology and folklore. Her work has been nominated for the Locus and Nebula awards, and has frequently appeared on Best of The Year lists from Barnes and Noble, Buzzfeed and more. Her New York Times bestselling series includes The Star-Touched Queen duology, The Gilded Wolves, and Aru Shah and The End of Time, which was recently optioned for film by Paramount Pictures.