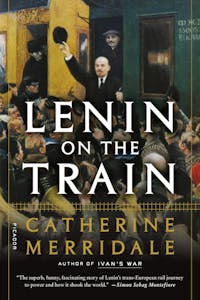 A gripping, meticulously researched account of Lenin’s fateful 1917 rail journey from Zurich to Petrograd, where he ignited the Russian Revolution and forever changed the world.

In April 1917, as the Russian Tsar Nicholas II’s abdication sent shockwaves across war-torn Europe, the future leader of the Bolshevik revolution Vladimir Lenin was far away, exiled in Zurich. When the news reached him, Lenin immediately resolved to return to Petrograd and lead the revolt. But to get there, he would have to cross Germany, which meant accepting help from the deadliest of Russia’s adversaries. Millions of Russians at home were suffering as a result of German aggression, and to accept German aid—or even safe passage—would be to betray his homeland. Germany, for its part, saw an opportunity to further destabilize Russia by allowing Lenin and his small group of revolutionaries to return.

Now, in Lenin on the Train, drawing on a dazzling array of sources and never-before-seen archival material, renowned historian Catherine Merridale provides a riveting, nuanced account of this enormously consequential journey—the train ride that changed the world—as well as the underground conspiracy and subterfuge that went into making it happen. Writing with the same insight and formidable intelligence that distinguished her earlier works, she brings to life a world of counter-espionage and intrigue, wartime desperation, illicit finance, and misguided utopianism.

When Lenin arrived in Petrograd’s now-famous Finland Station, he delivered an explosive address to the impassioned crowds. Simple and extreme, the text of this speech has been compared to such momentous documents as Constantine’s edict of Milan and Martin Luther’s ninety-five theses. It was the moment when the Russian revolution became Soviet, the genesis of a system of tyranny and faith that changed the course of Russia’s history forever and transformed the international political climate.

“Merridale’s account benefits from her thorough research . . . and vividly reminds us of how the fateful events of 1917 depended on a seemingly small episode.”—The New York Times Book Review

“Catherine Merridale, a distinguished historian of Russia and the Soviet Union . . . uses [Lenin’s] journey as the centerpiece of a broader account of the fall of czarism and the mounting Bolshevik pressure on the government that replaced it.”—The Wall Street Journal

“Merridale brings to her subject a scholar’s deep knowledge and a lively narrative style. It is a work that enlightens as well as it entertains.”—Literary Review

“Catherine Merridale is one of the foremost foreign historians of Russia, combining wry insights with deep sympathy for the human beings suffering the tragedies she writes about . . . Lenin on the Train combines diplomatic intrigue, spycraft, towering personalities, bureaucratic bungling, military history and ideology.”—The Economist

“Merridale’s excellent book . . . does an exemplary job of covering the complex history of the denials, evasions and cover-ups perpetrated by the Bolshevik leader and his successors.”—Dallas Morning News

“Merridale tells the extraordinary story of Lenin’s history-making journey. Drenched in atmosphere, [her] account has all the stuff of a spy thriller.”—Newsday

“Twice I missed my stop on the Tube reading this book . . . this is a jewel among histories, taking a single episode from the penultimate year of the Great War, illuminating a continent, a revolution and a series of psychologies in a moment of cataclysm and doing it with wit, judgment and an eye for telling detail . . . Catherine Merridale is one of those historians whose work allows you to understand something more about the world we inhabit now.”—David Aaronovitch, The Times (UK)

“Catherine Merridale, an experienced and enthusiastic historian of Russia, has chosen the pivotal moment of Lenin’s slow and halting odyssey to hang her history of how this ruthless fanatic hijacked a revolution.”—The Guardian (UK)

“The suberb, funny, fascinating story of Lenin’s trans-European rail journey to power and how it shook the world”—Simon Sebag Montefiore, Evening Standard

“In vivid prose, [Merridale]recounts the whole engine of revolution . . . A superbly written narrative history that draws together and makes sense of scattered data, anecdotes, and minor episodes, affording us a bigger picture of events that we now understand to be transformative.”—Kirkus Reviews

“History recovered as living drama . . . Merridale smuggles readers onto a train leaving Zurich in April 1917 that is carrying explosive freight: Vladimir Lenin, the firebrand who will kindle a revolutionary conflagration in Russia.”—Booklist

Catherine Merridale is the author of Red Fortress, which won the Wolfson History Prize; and two other critically acclaimed books, Ivan’s War and Night of Stone. A celebrated scholar of Russian history, she has also written for The Guardian, the Literary Review, and the London Review of Books, and contributes regularly to broadcasts on BBC radio. She lives in Oxfordshire, England.